Women Should Be Allowed in Combat Units, Report Says

Forums: News, Military, Women In Combat
Email this Topic • Print this Page
Reply Sat 18 Jun, 2011 09:49 am
I think it should be voluntary for women depending on their physical strength and never be mandatory. ---BBB

WASHINGTON -- A military advisory commission is recommending that the Pentagon do away with a policy that bans women from serving in combat units, breathing new life into a long-simmering debate.

Though thousands of women have been involved in the fights in Iraq and Afghanistan, they have done so while serving in combat support roles -- as medics, logistics officers and so on -- because defense policy prohibits women from being assigned to any unit smaller than a brigade whose primary mission is direct combat on the ground. On Friday, a special panel was meeting to polish the final draft of a report that recommends the policy be eliminated "to create a level playing field for all qualified service members."

If it were approved by the Defense Department, it would be yet another sizeable social change in a force that in the last year has seen policy changes to allow gays and lesbians to serve openly for the first time in the military and to allow Navy women to serve on submarines for the first time.

The newest move is being recommended by the Military Leadership Diversity Commission, established by Congress two years ago, and expected to send its report to Congress and President Barack Obama in the spring. The Army is doing its own internal study of the question as well.

The new report by a panel of retired and current military officers says that keeping women out of combat posts prohibits them from serving in roughly 10 percent of Marine Corps and Army occupational specialties and thus is a barrier to promotions and advancement.

"The Armed Forces have not yet succeeded in developing leaders who are as diverse as the nation they serve," said the report, which also touched on recruiting and a range of other issues affecting the diversity of the force. "Minorities and women still lag behind white men in terms of number of military leadership positions."

Women generally make up about 14 percent of the armed services. Of the roughly 2.2 million troops who've served in Iraq and Afghanistan, more than 255,000 have been women, said Pentagon spokeswoman Eileen Lainez.

Opponents of women in combat question whether they have the necessary strength and stamina.

They also have said the inclusion of women in infantry and other combat units will harm unit cohesion, a similar argument to that made regarding gays, and that Americans won't tolerate large numbers of women coming home in body bags.

Supporters of the change reject those arguments.

"It's something whose time has come ... a logical outcome of what women have been doing in Iraq and Afghanistan, where the Army and Marines have been essentially ducking the policy," said Lory Manning of the Women's Research and Education Institute. "They come up with the (term) `attaching' someone to a unit as opposed to 'assigning' -- but they've been doing it for nine years now."

The current policy "represents a huge glass ceiling for servicewomen," Anu Bhagwati, former Marine Captain and executive director of the rights group Service Women's Action Network, said. "It is archaic, it does not reflect the many sacrifices and contributions that women make in the military, and it ignores the reality of current warfighting doctrine."

Since promotion to many senior positions in the military is dependent on combat experience, changing the policy is a matter of fairness, she said.

The new report challenges predictions that a change would have ill effects on the units. "To date, there has been little evidence that the integration of women into previously closed units or occupations has had a negative impact on important mission-related performance factors, like unit cohesion," the draft says.

"Furthermore, a study by the Defense Department Advisory Committee on Women in the Services actually found that a majority of focus group participants felt that women serving in combat in Iraq and Afghanistan have had a positive impact on mission accomplishment," the report says of a previous independent study.

Top defense leaders have said they see the change coming someday. In answer to a question, Defense Secretary Robert Gates in September, for instance, told ROTC students at Duke University that he expects women to serve in special operations units, the kind of commando teams known for stealth missions. Gates said he expects women will eventually be allowed into special operations forces in a careful, deliberate manner.

The new report recommends a phased-in approach. First women in career fields and specialties currently open to them should be immediately assigned to any unit that requires that specialty.

And the Pentagon and individual services should take steps in a phased approach to open to women additional career fields and units involved in direct ground combat, the report said.

Lainez said the department will review the recommendations when the report is delivered.

But regardless of what becomes of the policy, she noted that women will continue to be drawn into combat action.

"Women in the military continue to make tremendous contributions and profound sacrifices," Lainez said in an emailed statement. "Women will continue to be assigned to units and positions that may necessitate combat actions (even within the current restrictions) -- situations for which they are fully trained and equipped to respond."

The word that Pentagon rules may soon "catch up a bit with reality" as the military considers formally allowing women to do something that they've already been asked to do in Iraq and Afghanistan — serve close to the front lines but technically not "in combat" — raises a question.

Will women in the U.S. military some day serve in all the roles that men do, including combat?

But officials tell The Associated Press that the new rules would "formally allow women to be assigned to a battalion and serve in jobs such as medics, intelligence, police or communications officers."

Of course, as the AP says, in Iraq and Afghanistan many women have been doing just those jobs — but at the larger, brigade-level. Some have then been "attached" to battalions, "which meant they could do the work, but not get the credit for being in combat arms."

Tom reminds us that "thousands of women have served in both wars and more than 150 have been killed." Women make up about 15 percent of the active duty military, he says.

The Pentagon's proposal comes in a recommendation to Congress that's due to be released later today.
0 Replies
2
Reply Thu 9 Feb, 2012 12:27 pm
This is just an admission that women ARE in combat today.

Not mandatory? Shucks, you're in the Army now... . When there's a mission, they don't usually hand out a clipboard asking who wants to go?

CBS interviewed a veteran from Broken Arrow, Oklahoma last night. Other squads would ask for her to come along because she was so good handling the 50 Caliber Machine Gun.

During the Second World War, or the Great Patriotic War as the Soviets called it, they relied heavily on women, and not just in medical units, or to replace men in support units so they could be sent to the front. Over 800,000 served in the Red Army, 200,000 were decorated for heroism in combat, and 90 of them were awarded the highest honor, Hero of the Soviet Union.

Lidya Litvyak, the "White Rose of Stalingrad," a fighter ace who was shot down and whose remains were never recovered.

Lyudmila Pavlichenko was a sniper from the Unkraine who was credited with more than 300 "kills"--the Red Army came to consider women to be superior in the role of sniper. She was taken out of the line for propaganda purposes, and became the first Soviet citizen to enter the White House and to meet an American President.

Roza Shanina, with "only" 54 confirmed kills, was killed herself early in her career, and was twice decorated in the few months she spent on the line.

Yelizabeta Mironova, as a Marine, did not have a "kill count" (the Soviet Marines didn't keep those statistics), but she was considered a master (or mistress?) of using camouflage.

These two women were partisans in the Ukraine, and although this is a publicity still, these women infiltrated the German lines, and fought behind the lines with other partisans.

Katya Ryabova and Nadya Popova hold the record for the most sorties flown in a single night. Their unit, the 588th Aviation Regiment, was all female, including all the mechanics and support staff. The 588th flew more missions than any other Soviet Aviation unit in the war. Many of the women who survived the war had flown a thousand or more missions. Many flew obsolete wooden biplanes, and the Germans dreaded them--they called them the Nachthexen, the night witches. 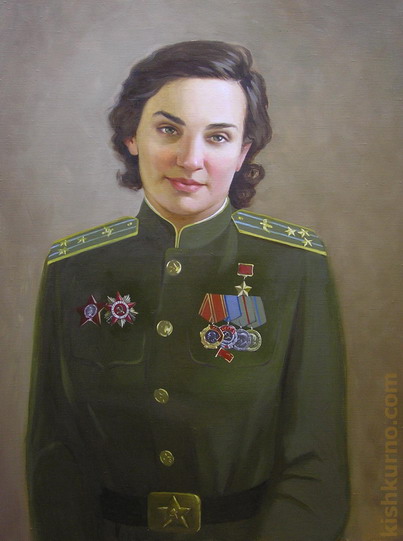 Valentina Grizodubova, a fighter pilot, was the first woman to be awarded the Hero of the Soviet Union.

Mariya Dolina was also awarded the Hero of the Soviet Union, and rose to the rank of Guards Captain, commanding a bomber regiment. 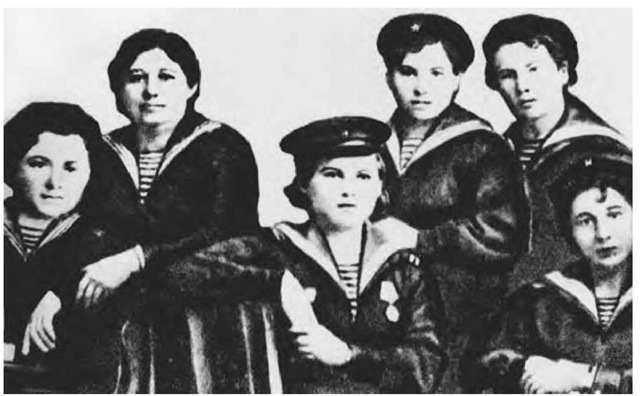 This is the all female crew of a Soviet minesweeper.

Aleksandra Samusenko reached the rank of Guards Senior Lieutenant and commanded an armored battalion. The Red Army employed many women as drivers of armored vehicles because it was thought that they fit the cramped compartments more easily than men. Gds. Sr. Lt. Samusenko was killed in combat in April, 1945.

I can go on like this for days, but i'll give it a rest now.
0 Replies