Don't Mess with My Oreos

Forums: Food, Community, Weirdness, Oreos, Rituals
Email this Topic • Print this Page
1
Reply Wed 18 May, 2011 06:57 pm
I had forgotten all about Chuckles, even when Boida was talking about them, until i saw that picture. I loved Chuckles--i'd gladly have murdered for Chuckles. I'll bet i haven't though about them or even seen them in more than 40 years.
0 Replies
1
Reply Wed 18 May, 2011 07:13 pm
@Roberta,
I thought I remembered seeing them at Walgreens. I googled chuckles wal and walmart autofilled. Apparently you can get them at Walmart in a tub. They don't show up in a search at walgreens.
0 Replies
1
Reply Wed 18 May, 2011 08:31 pm
Looks like you can buy them on Amazon, or a site called old time candy (and some others, those were the first 2 I noticed).

I think we should all chip in and buy Boida a case.
0 Replies
2
Reply Wed 18 May, 2011 09:09 pm
I no longer have a regular food ritual, but as a child I was fascinated by some colorful shrimp chips that came from our local chinese take-out place. They were deep fried, brightly colored rice chips that tasted like shrimp. I thought they were beautiful. No one else in my family seemed to care about them and I coveted them like Golem and his ring. I would be very stealth about sneaking out of our dining room with the white waxy bag and hiding them in my Barbie townhouse. Each day, before I brushed my teeth for bed, I would eat one or two. This would go on for a couple of weeks until that started to taste stale or I ran out. A few years ago, I found these chips in a Chinese grocery. They are just as pretty pre-fried as fried. I cooked them up and was overwhelmed by memories the moment I tasted them. It was like being 7 years old again. Now I'm going to go look for them on-line.
0 Replies
1
Reply Wed 18 May, 2011 09:12 pm
Shrimp Chips! 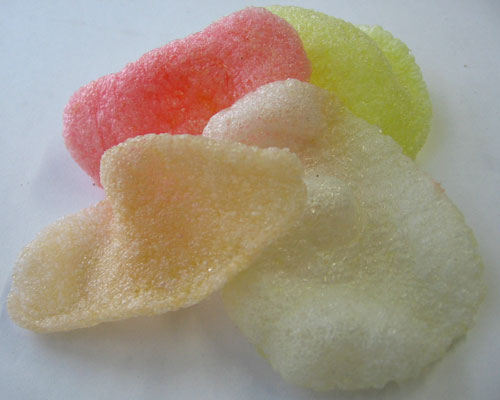 They're one of the things I don't love to prepare at home as you need really good ventilation to get the smell out of the house.

2. The closest Walgreens is in midtown. I'm not gonna schlep miles for a piece of candy. I suspect that there are Chuckles somewhere in my neighborhood. I just don't know where.

3. Chai, thanks for the charitable thought. A CASE!!! Don't want a whole case. Want one steenkin' Chuckle (red). My teeth are already in enough of a mess.

Green Witch, I like those shrimp chips too. Never hoarded them, though. And there were no Barbie dolls when I was growing up. So I didn't have a Barbie dollhouse to stash anything in. I had my places though.
1 Reply
1
Reply Wed 18 May, 2011 11:17 pm
@Roberta,
there's nothing but walmarts in boofoo kansas.

I'll see if I can find some chuckles to ship with benjamin and the solomon seal.

youz got me curious now.

not available in the midwest...

I'll keep looking.
0 Replies
1
Reply Wed 18 May, 2011 11:47 pm
Sundae! With my spoon, I dig a little hole at a side of the vanilla ice cream. The cherry on the top goes to the bottom. To soak in the chocolate syrup sliding at the sides of the sundae glass. While I finish off the ice cream, the cherry awaits in gooey chocolate splendor. Then I pop it.. Yummm!
0 Replies
2
Reply Thu 19 May, 2011 01:05 am
@ossobuco,
Perfec squares, and deeply scored in case some slick talker conned you into sharing. As if!
2 Replies
1
Reply Thu 19 May, 2011 09:55 am
@ossobuco,
ossobuco wrote:

I remember those - I liked them. Of course, I forget the name. The one I'm thinking of was square, in a foil wrapper.

I found some Hostess cupcakes at the pharmacy. Hadn't had any in a long time. Bought a box.

I found myself peeling off the top icing and putting it aside. I ate the cupcake and then ate the icing separately. I did this for every cupcake without thinking about it. But it was essential. I couldn't bite into the cupcake until the icing was off.

Clearly a holdover from childhood.