Forums: Gay Marriage, Church, State, Same-Sex, Civil Union
Email this Topic • Print this Page
Reply Tue 19 Apr, 2011 06:14 pm
Growing up, I attended several parochial schools of differing denominations, and from what I can tell, the definition of marriage according to most religions might be an issue of contention here. I guess what I mean to ask is:
Do you think the government assumed the heterosexual definition of marriage due to the overwhelming Christian religious-majority in the States?

Do you think the issue would be better understood if a federal definition of marriage (for tax purposes, etc.) was considered separate from a religious definition (civil unions/"marriage licenses" vs. the pomp and ceremony found in religious, ceremonial marriages)? Or would that just snarl the issue immensely?
Type: Discussion • Score: 5 • Views: 5,769 • Replies: 68
3
Reply Tue 19 Apr, 2011 06:16 pm
@TheArtfulDodger,
I think it would snarl, because what a lot of people want is a no-asterisk marriage. Same as anyone else. 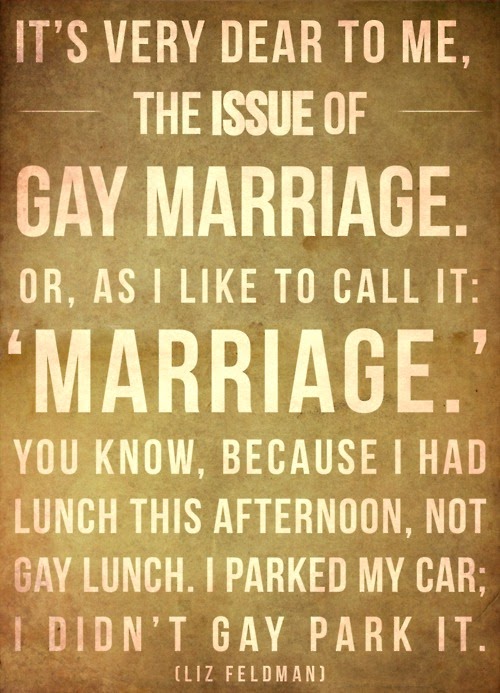 3 Replies
1
Reply Tue 19 Apr, 2011 06:23 pm
@sozobe,
Fair enough; I'd agree. I had this discussion with a friend the other day - as much as I'd like to hope that the issue could be dealt with by federal legislation being considered separately from the definition of marriage as provided by churches... I have a feeling that this might not be enough for some facets within the gay community, who demand the same "marriage rights" as heterosexuals.

But does the government really have a place in telling the church to accept them? I'd certainly think not.

And how in the deuce do you propose getting around that snarl? I'm a bit lost for ideas..
2 Replies
1
Reply Tue 19 Apr, 2011 06:26 pm
@TheArtfulDodger,
Who cares what a church accepts? From a societal standpoint, marriage in America is a civil institution, not a religious one.

Cycloptichorn
1 Reply
1
Reply Tue 19 Apr, 2011 06:29 pm
@TheArtfulDodger,
i never thought the government was going to mandate that churches marry folks, they don't do that now, catholic churches regularly don't marry divorced folks or non catholics, there are churches that will marry gays, i always thought the issue was getting the marriage legally recognized, ecumenically mandated
1 Reply
1
Reply Tue 19 Apr, 2011 06:30 pm
@Cycloptichorn,
That's what I'm getting at - the people who I think will end up caring will be the people that are not allowed the marriages they want. While marriage as a civil institution certainly seems to be an issue too (differences in taxation under DOMA, etc.), I don't think you can really ignore the hullaballoo that stands to rise from a firm "no" from the churches. I see potential for a bit of a temper tantrum among the gay community - I'd hope it wouldn't come to that.
0 Replies
1
Reply Tue 19 Apr, 2011 06:31 pm
@djjd62,
I don't think they will - constitutionally, I don't believe they can. But am I the only one who sees potential for a mass of whinging that new marriage rights aren't entirely equal because churches won't marry gay couples?
2 Replies
1
Reply Tue 19 Apr, 2011 06:37 pm
@TheArtfulDodger,
i doubt it, once it sinks i that the marriage (whatever form it takes) gives them equal legal protection under the law, i don't think the form of the marriage will matter much

one problem the government will have to deal with is civil unions being performed (or rather not performed) by religious folks who don't agree with the concept of gay marriage, would it be a violation of their religious freedoms to make them perform such marriages (ie could a justice of the peace refuse to marry a gay couple if it conflicted with his/her beliefs)
1 Reply
3
Reply Tue 19 Apr, 2011 06:53 pm
@TheArtfulDodger,
I think there will be plenty of churches willing to perform those marriages. If there are churches that refuse, I think that people will take that up with the specific churches.

The Evangelical Lutheran Church in America voted a year ago to drop the requirement that to serve as pastors, they refrain from sexual relationships.

0 Replies
1
Reply Tue 19 Apr, 2011 07:00 pm
@djjd62,
Ahhh I have heard of cases though where couples are angry that they can't have their religious wedding as well. I'd have to dig up the articles, and I apologize for it being temporarily unsubstantiated like that.

Just to clarify: do you mean if someone working in the office which distributes marriage licenses disagrees with the legislation and opts to not issue civil union licenses to same-sex couples?
1 Reply
1
Reply Tue 19 Apr, 2011 07:03 pm
@sozobe,
And there are! However looking at the infrastructure, some of those churches are acting against the "status quo" or traditions/rules of their respective religions ("rebel churches" where same-sex marriages are performed, despite being against the doctrine of whatever religious sect they may belong to). This is another idea entirely (as I see it anyway), though I'd certainly like to see that expanded on as well.
1 Reply
1
Reply Tue 19 Apr, 2011 07:04 pm
@TheArtfulDodger,
right now, a justice of the peace can marry a heterosexual couple in a civil marriage (non church wedding), i'm wondering what would happen if gay marriage is passed, would a justice of the peace who's religious beliefs were against homosexuality be forced to marry a same sex couple, or could they claim it violated their right to religious freedom
1 Reply
1
Reply Tue 19 Apr, 2011 07:07 pm
@djjd62,
Righto, that's what I thought you were asking!
My thought? As an employee of the state, I think he'd be required to adhere to the law, regardless of his personal beliefs. Said-justice may choose to remove himself or herself from the position if it conflicted that much, but I don't think anything significant would come of it.
1 Reply
1
Reply Tue 19 Apr, 2011 07:09 pm
@TheArtfulDodger,
Well, as far as I can tell (and I can't quite tell), that's pretty central to what you're asking about gay marriage (aka 'marriage'.)

Part 1: Same-sex marriages are made legal, (at the state level, federal level, or both). This is all that the government can do.

The ones who don't will likely get pushback, and things will go from there. That's not a legal/governmental issue though, it's an internal church issue.
0 Replies
1
Reply Tue 19 Apr, 2011 07:10 pm
@TheArtfulDodger,
I seem to remember this came up somewhere recently -- someplace where gay marriage is legal but the state employee refused to provide a marriage license, something. Let me see if I can find it.
2 Replies
1
Reply Tue 19 Apr, 2011 07:13 pm
@sozobe,
I'm not sure if this is what I was thinking of but it's the same general category:

The Iowa Family Policy Center and the Alliance Defense Fund are encouraging Iowa's county recorders to exercise their "right of conscience" and refuse to process marriage license applications from same-sex couples. Former Iowa legislator Ed Fallon has responded by filing ethics charges against state Sen. Merlin Bartz for circulating a petition and creating a website in support of the anti-gay groups.

"It's really important that state lawmakers respect their oath of office and we have really serious questions about whether that's happening in this case," Fallon said. Fallon pointed to public comments Bartz has made urging recorders to refuse to comply with an April 3 ruling by the Iowa Supreme Court striking down the state's ban on gay marriage. Fallon argued that the oath of office lawmakers take requires them to follow the law and urge others to do the same. "We shall obey and encourage people to obey and support the laws of this state," said Fallon. "This clearly seems to be inconsistent with that." Bartz has supported a petition being circulated by the Iowa Family Policy Center, urging county recorders to defy the law. The complaint also questioned whether public money was used to develop and maintain a Web site that Bartz used to promote the petition. Fallon noted that the Web site lists as contacts Republican legislative staffers "who are entirely funded at taxpayer expense."

Iowa Attorney General Tom Miller is warning workers in county recorders' offices to process the paperwork of gay couples or face the penalty of law. Miller: "If necessary, we will explore legal actions to enforce and implement the court's ruling, working with the Iowa Dept. of Public Health and county attorneys." Iowa begins granting same-sex marriage licenses on Monday. The Alliance Defense Fund is offering free legal defense to any state worker that refuses to comply.

Many links in original.
1 Reply
1
Reply Tue 19 Apr, 2011 07:14 pm
@sozobe,
we've had issues in Canada with doctors who's religion prohibits birth control bucking the Health Care System that pays them to provide legitimate services to their patients
1 Reply