How would you make a comic book series about streetfighting cats and dogs more interesting?

Forums: Art, Drawing, Writing, Comics, Comic Books
Email this Topic • Print this Page
Reply Thu 10 Mar, 2011 01:14 am
The general idea- there are good cats and dogs and bad cats and dogs. The main characters are streetfghters and decide they want to become heroes because they are tired of all the violence and lawlessness running rampant in their home town. They want to rid their hometown of all the criminals and criminal activity going on and want to bring justice to it, so they work on their plans of making their hometown a place of refuge and go and fight the bad guys. The bad guys want to turn their hometown into a safehaven for criminals and are constantly trying to get rid of the heroes.. The good guys get allies and so do the bad guys. The main heroes decide to go and recruit other heroes to form a gang. The main villain follows suit and decides to form his own gang.

The heroes not only fight to stop bad gangs and other criminals in their hometown, they go across town and around the country and the world doing this and gain allies along the way. The heroes meet up with other good gangs. The bad guys go and get allies in a similiar manner. They meet up with other bad gangs.

The heroes come up with new ways and means to fight the bad guys, and the baddies follow suit and try to thwart them.

The heroes hear about other good gangs who are in trouble and go and help them while the bad guys go and join forces with the bad gangs.

Both parties decide to branch out and gain members for both groups across their town, across the country and around the world.

The heroes and villains will meet characters form other countries and cultures.

As to how to make it more interesting....I would dedicate as much time to character development plots as the fighting. Show all sides of the main characters, their fighting sides, what they are like when they have down time, what they think and feel when they are alone, where they are weak and strong, the personal relationships they have. If you make the characters relatable to the readers then it won’t matter that they are a different species.

2 Replies
1
Reply Sat 12 Mar, 2011 08:25 am
@Aldistar,
You have to have bystanders- that is, "regular" people that appear either as supporting characters or background characters or as extras when you write any hero comics. That's a given.

One of the requirements when you submit original artwork to DC Comics and Marvel Comics is knowing how to draw regular people.

These characters live in a world populated with humanoid cats and dogs.

I was thinking about including rabbits eitehr as neutral characters or as criminals or both but I don't know if I want to include them.
0 Replies
1
Reply Sat 12 Mar, 2011 08:26 am
@Aldistar,
The heroes and villains have to have an origin, and have a reason for doing what they do..

I was thinking more along the lines of what activities can the heroes and villains do and other characters do to make the stories more interesting? Do you have any further suggestions?
1 Reply
2
Reply Sat 12 Mar, 2011 08:42 am
okay, you know those cards that have the chips in them that play music when you open them, well every time you had a fight sequence on a page, you could use a chip with the song kung fu fighting on it, that would be cool, you turn the page and immediately here that "oh woah, oh oh", the song starts, the action on the page is intense, spectacular

hey, the song even references cats, what could be better

I was thinking of having cats, dogs (and possibly rabbits) smuggling herbs- catnip and anise (and possibly the rabbit equal of catnip) but people could construe that as drug abuse.
0 Replies
1
Reply Sat 12 Mar, 2011 09:13 am
I describe my comic as Catillac Cat meets Street Fighter with some elements of Darkwing Duck and Popeye mixed in.
0 Replies
1
Reply Sat 12 Mar, 2011 07:55 pm
@JGoldman10,
From what you described earlier the heroes are born of wanting a better life for themselves and the people around them. They are tired of living in a crime-riddled life. That seems origin enough to me.

As for the villains, well, evil run amok and lust for money and power is the underlining motivation for most bad guys. Your villains do not seem the tragic type that have a noble idea that gets horribly warped out of perspective.

Maybe your world can belong in a feudal system where the everyday people are kept under the boot of a tyrant ruler and your heroes want to help free everyone?

...Or the villains kidnap people and sell them to 'slavery' of human pet stores? (Not sure if humans play any part in your story line) and your heroes work at rescuing the kidnapped people?

The drug trafficking is actually not a bad idea as a sub plot.

The cats and dogs ARE people- there's no humans involved in this series except in alternate universes or alternate realities.

Did you ever watch Ducktales or Darkwing Duck? All the normal "people" were humanoid ducks, geese, chickens, dogs, etc.

In Goof Troop most the people were humonoid dogs. Pete and his son were cats.
In TaleSpin, all the characters were animals.
0 Replies
1
Reply Sun 13 Mar, 2011 03:37 am
@Aldistar,
Did you ever see the Warriors? I drew some influence from that.
0 Replies
1
Reply Sun 13 Mar, 2011 04:13 am
@Aldistar,
The main character decides to take it upon himself to fight criminals because he was tired of the lawlessness running rampant in his hometown. He decides to become a hero because his dad was a cop.

I was thinking something happened to threaten his dad and mom, so he becomes a hero out of respect for his dad. How does this sound?

He has a buddy, who is his sidekcik, but he also has a brother. I am trying to decide if the brother should be a regualr member of his crew or if he shows up to help on occasion. Althought they are both heroes, should the main hero and his brother be friends or rivals? What do you think?
1 Reply
1
Reply Sun 13 Mar, 2011 02:55 pm
@JGoldman10,
If they are both heroes then maybe the main character is the boy scout version and the brother could walk that fine line of getting things done no matter the cost. This would keep them both heroes but with different ways about achieving their goals. One thinks the other is too soft while the other thinks the one crosses to many lines. This keeps them on the same side but always in a state of conflict.

Having the father killed or injured by the criminal element would suffice as the impetus for the kids to begin crime fighting on their own.

Yes I loved watching Darkwing Duck and the Duck Tales. If this is the case maybe use the organized crime angle. Take a look at what's is happening in Mexico right now where the drug lords all but own and run many of the small villages. They kidnap people to work in the drug fields and kill indiscriminately to keep the population under control. That would be a background that is just waiting for a super hero to emerge.

3 Replies
1
Reply Sun 13 Mar, 2011 03:32 pm
@Aldistar,
That's just it- why does something tragic have to happen to the hero before he becomes a hero? That's what happens to a lot of superheroes. The main hero's parents can be victimized but not killed. His dad is a cop and his mom is a nurse. His dad was fighting some criminal and the bad guy overpowered him. The dad goes to the hospital and gets taken care of my his wife. The bad guy hurts the mom to get at the dad. That could work.
0 Replies
1
Reply Sun 13 Mar, 2011 03:35 pm
@Aldistar,
My characters aren't superheroes. Just streetwise streetfighters who decided to take a stand against violence, criminal activity and violence.
0 Replies
1
Reply Sun 13 Mar, 2011 05:05 pm
Cats are a fraction the size of dogs, fantastically agile in comparison to dogs, and disappear in the shadows--they're the ninjas, the lurkers, the stealth fighters, the ones that walk the ridgelines of roofs, that jump to ledges to peer in windows and skylights, the ones that find out the secrets of the other side, the ninjas, their weapons are claws and swords that look like large claws, they tip their claws with neurotoxins that compel the animal scratched to tell the truth, or turn him into suggestible somnambulists who will carry out whatever order they're told to do (that's what the bad cats do to the good cats).

Every few months they all go into heat (human women living together tend to end up with periods synchronized, same with animals), makes things chaotic, good acts bad, no one can plan anything, schemes break down.

Dogs are bigger and slower--they're the heavy fighters, the animal "tanks" that kick down doors, that absorb the punishment in the streetfights, the heavy fists and kickers and biters that take down the other side, while the cats whirl in, strike, and wheel away.It's the dogs that get the big "BAM!" signs in the panels, while the cats get the "zzzlitz" sound effects.
4 Replies
1
Reply Mon 14 Mar, 2011 04:16 am
@Aldistar,
Did you ever watch Danger Mouse?:

Those were ALL funny animal characters, except for maybe one humonoid robot that appeared in one episode.

You said you remember the Catillac Cats:

These were the main characters. Cats and dogs were the focus of this show.

In the late '90s there was a show I recall seeing called Swat Kats: 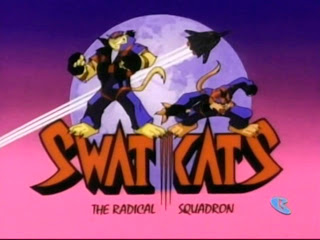 ALL of the characters in that show were humoniod cats.
1 Reply