God is on the side of the big battalions

Forums: English, Military, Napoleon, Efl
Email this Topic • Print this Page
1
Reply Sun 21 Feb, 2010 11:59 am
@High Seas,
So, we will give him the benefit of the doubt..
0 Replies
1
Reply Sun 21 Feb, 2010 12:21 pm
@High Seas,
well I would opine that George Kennan was an interesting and noted influence.
1 Reply
1
Reply Sun 28 Feb, 2010 10:31 am
@dyslexia,
Yes, he definitely was that. He saw clearly not only (in the 1940s) that "ally" Soviet Union was to be contained at all costs, but also all the way down the line to the pointless (at best) attack on Iraq - he certainly never believed the propaganda about Saddam having nukes and was dead set against that war. Excerpt from one review of his book with which I concur - and I think you do as well:

....his words take on the weight of a distinguished career. Kennan rejects ""any and all messianic concepts of America's role in the world"" and calls for ""a modest and restrained foreign policy,"" with cuts in military spending and foreign aid.

0 Replies
1
Reply Fri 5 Mar, 2010 07:55 am
@High Seas,
Military history, primarily; from the peninsular war to the first and second Boer wars. My most prized possession is a silver teapot inscribed 'To Colonel Sir Henry Hardinge'. As you will no doubt know, he was an hero of the Napoleonic wars and became Wellinton's successor as commander-in-chief of the British Army.
0 Replies
1
Reply Fri 5 Mar, 2010 08:13 am
@High Seas,
That New Yorker spoof had me in stitches HS

The English have a great conceit about their military history. I think it is not justified. The best that can be said of them is the devotion and discipline of the common foot soldier, which rivals that of Rome's legions at their height. Marlborough was their greatest military leader, and he worked no permanent changes in their military establishment. Wellington was a great talent, but the unheralded genius (in the sense of spirit) of the British military establishment in the era of the Wars of the French Revolution and the era of Napoleon was the Duke of York. His advocacy of Arthur Wellesley was responsible of the then little considered officer from the despised Indian Army being given the responsible command in the Peninsula. The Duke of York did all he could for the common soldier, and while unable to do anything about the purchase system for army commissions, he assiduously promoted the interests of competent officers, without regard to their wealth or social standing.

Wellington was notable for his careful staff work (Lord Raglan was one of his favorite staff officers), and his attention to the logistical requirements of his forces. But he left no legacy, and after the end of the era of Napoleon, the Royal Wagon Train was abandoned. When Raglan went out to take command of the army during the Russo-Turkish War of 1853 (a.k.a. the Crimean War), there was no such logistical support, and the needs of the army were overseen by six different agencies, including two from the Treasury and one from the Admiralty.

The worst case of English conceit is Bernard Montgomery. There was a man who, in the Second World War, was perfectly prepared to fight the First World War. In fact, he hadn't even learned the lessons of the First World War. After Max Hoffman and other brilliant German officers had evolved the principle of putting maximum force into the offensive while bypassing and cutting off the enemy strong points, every army in the world should have learned those lessons. Not so with Montgomery, who throughout the war simply bludgeoned his enemies in headlong attacks, and the cost to the troops be damned. At El Alamein, the New Zealanders and Indians bore the brunt of the casualties as he hurled them at the Afrika Korps' dug-in positions. His most criminal act of the war, however, was the winter campaign to drive back the German salient created by the "battle of the bulge." Rather than cut off the base of the salient, and thereby either trapping the Germans or forcing their precipitate retreat, he simply launched the troops that Eisenhower foolishly gave him headlong at the salient. He so consistently squandered the initiative of American airborne forces, at times even requiring them to retreat so as not to mess his lovely little phase lines, that Matthew Ridgeway tried to resign, and secured Eisenhower's permission to withdraw from Montgomery's command. It was one of the bloodiest and most tragic campaigns of the war, and is now hardly ever noticed by military historians of the European portion of that war, probably from sheer embarrassment. He continually whined that he should be given this or that command, and Eisenhower caved in to him every time. His "bounce the Rhine" operation in March, 1945 was yet another criminal waste of troops. Alexander, never credited for his qualities, was a far better commander than Montgomery.

The spearing of Montgomery is justified, especially when Patton and Bradley saw a chance to bag an army at the Bulge by pinching the bulge closed and Monty dragged his feet(he complained he would need 2 weeks to make a direction change)

But one wonders what Ike must have thought when Monty brought him his plans for "Market Garden"
the infamous Bridge Too Far campaign.

A daring blitzkrieg using paratroopers, it's like Monty had finally learned modern warfare. Alas , it was not to be. With poor intelligence work and the "Tommies" penchant for brewing tea at the most inopportune times, (Ben Vandervoort-battalion commander in the 82nd Airborne) the attack ultimately failed
1 Reply
3
Reply Fri 5 Mar, 2010 09:12 am
@panzade,
What was criminal there was that Montgomery completely ignored intelligence from the Dutch underground, who were telling him that there were two panzer divisions (9th and 10th) at Arnhem. He was inexcusably rude to the Dutch Crown Prince who accompanied Horrock's XXXth Corps. The Dutch had set up an entire, second "ghost" switching system on the national phone grid, and all the Allied commanders could have been in telephone communications with one another at any time.

About the only intelligent contribution Montgomery made to the war was in advising against the attack on Dieppe. He was ignored then, the one occasion upon which the Imperial General Staff should have taken his advice.
0 Replies
1
Reply Mon 22 Aug, 2011 11:08 am
Co-Credit where it's due, please. The quote is from Book Two of War and Peace. The author puts the quote in the mouth of a Russian field commander who is aware that Napoleon (as the French say NAPO'-leon) assses the situation in numbers.
0 Replies
1
Reply Thu 30 Nov, 2017 09:47 pm
@Setanta,
That is a huge assumption about God - however if considering a God of infinite power who could ever assume over or prevent God from controlling the outcome of a battle or of anything for that matter. In the holy bible there are scores of major battles where God is detailed as controlling the battle outcome. Some believe that for Napoleon, this assumption against God, is part of His downfall at Waterloo. The English news report on Wellington's victory at Waterloo was that God had given England the victory. Take a close look even today on how many athletes and musical artists give God glory for the victory they have received.
2 Replies
1
Reply Thu 30 Nov, 2017 11:30 pm
@maximus7777,
It's no skin off my nose if you want to entertain an imaginary friend superstition. Leave me out of it, though.
0 Replies
1
Reply Fri 1 Dec, 2017 12:54 am
@maximus7777,
Do you really think a God is concerned over a soccer match or basketball game? Honestly??? Isn’t that a tad warped?
1 Reply
1
Reply Fri 1 Dec, 2017 02:15 am
@glitterbag,
Insofar that competitive sports can be considered to be proxy 'wars' then involvement of 'God' is quite understandable.
Perhaps one of the best examples of pillory comes in Heller's 'Catch 22' when the chaplein is ordered to pray for a 'tight bomb pattern'.
1 Reply
1
Reply Fri 1 Dec, 2017 02:35 am
@fresco,
God's like John Terry, always taking credit for **** he's not done.

Jehovah blew with His winds, and they were scattered is a famous phrase on the aftermath of the defeat of the Spanish Armada in 1588, when the Spanish fleet was broken up by a storm, which was also called the Protestant Wind.[1] The phrase seems to have had its origin in an inscription on one of the many commemorative medals struck to celebrate the occasion. 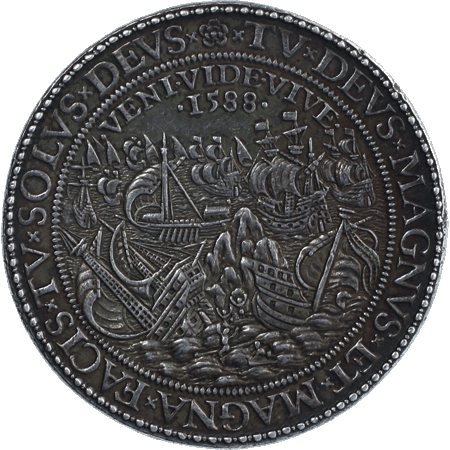