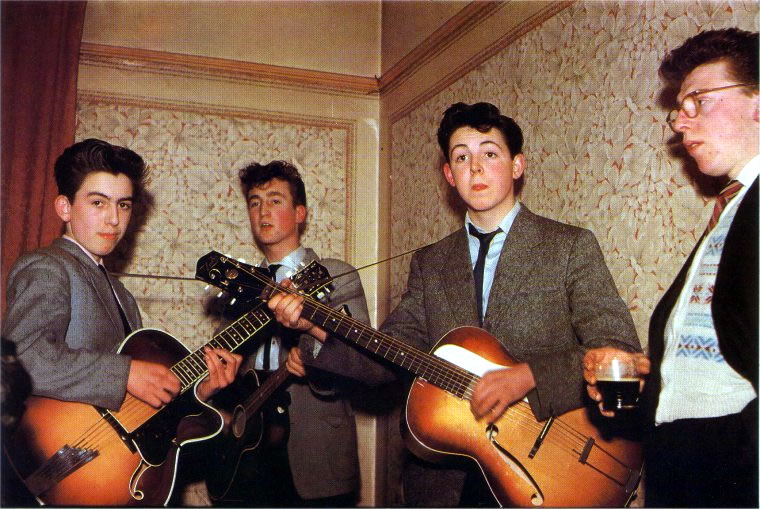 They look such nice, somewhat dorkish boys! Pursuing their musical inclinations at some one's home or some small local venue. And probably doing better at their music than their school work!

1 Reply
1
Reply Sun 17 Jan, 2010 08:38 am
@msolga,
i remember reading an article one time and one of the guys, i think it was george, was saying they were all just lucky they didn't end up lorry drivers or dock workers

i wonder who the fellow with the beer is, you go out for a quiet drink, to see some local lads play some music, and you, your acne (possibly freckles) and your sweater vest end up a part of history
1 Reply
1
Reply Sun 17 Jan, 2010 08:44 am
@djjd62,

i remember reading an article one time and one of the guys, i think it was george, was saying they were all just lucky they didn't end up lorry drivers or dock workers

You can hear exactly that those must be the Beatles ... NOT!


Well, I've got a couple of recordings from the Hamburg period - some youngsters may have doubts there as well

George has such a knowing look . . . he's the only one looking at the camera. John looks like a teddy boy dressed up in a suit, and Paul looks like he's not exactly sure about what he's doing. Where are Stu and Pete?


Both joined in 1960.
0 Replies
1
Reply Sun 17 Jan, 2010 12:46 pm
You missed the point of the question, Brandon. What were Stu Suctliffe and Pete Best doing at that time was the burden of my question. I acknowledge that that was not clear from the way i framed the question.
1 Reply
1
Reply Sun 17 Jan, 2010 12:54 pm
OK, i did my own research (Wikipedia, at least), and apparently Sutcliffe was actually trying to be an artist while attending the Liverpool College of Art, where he met Lennon, who moved into his apartment. Pete Best was already known in the Liverpool music "scene" as a reliable drummer when McCartney was looking around for a drummer to go to Hamburg with them.

I read an "authorized" biography many, many years ago, but i don't recall the details, and i do recall that it tended to focus on the three who went to Hamburg and remained with the group after Sutcliffe left Best was dumped. It also focused on Starkey (a.k.a. "Ringo Starr"), who was already popular as a drummer in the Liverpool pop group Rory Storm and the Hurricanes. As i recall, the biography didn't pay much attention to Sutcliffe or Best until they hooked up with the other three, but devoted full biographical attention to Starkey, even though he was added to the group to replace Best (they blindsided Best with that) because of his popularity, long after the group was well known.
0 Replies
1
Reply Sun 17 Jan, 2010 01:03 pm
@Setanta,
Stuart Sutcliffe attended, after finishing grammar school in 1955, a three-years-course at Liverpool College of Art.

In 1957, Pete Best was still playing with his own band, the Black Jacks.
0 Replies
1
Reply Sun 17 Jan, 2010 01:06 pm
I think Pete Best got screwed, and that all of them were taken advantage of. Best was a better drummer than Starkey, but it seems he might have been seen as too difficult to manage. Starkey was already popular (as Ringo Starr), but he was not considered a good drummer, so they used a studio man for the early recordings--that, at any rate, is what i've read, a long, long time ago.
0 Replies
1
Reply Sun 17 Jan, 2010 02:02 pm
Yeah, I really liked Syd Barrett but David Gilmour was pretty damn good.
0 Replies
1
Reply Sun 17 Jan, 2010 02:03 pm
Actually, Ringo was then considered the best drummer in town, and is today considered by many to be the best living rock drummer. When the Beatles auditioned for George Martin, he felt that Best couldn't keep time with the music and told Brian Epstein something like, "I don't care what you do on the road, but I'm getting another drummer for the studio." They told Martin that they had been thinking the same thing. Brian was then enlisted to fire Pete and hire Ringo (who had sat in with them several times before when Pete was unavailable). Martin, though, didn't know that Ringo had been hired, so when they showed up to record "Love Me Do," he had Andy White ready to play the drums. Apparently Ringo jokingly still complains about it to him.
1 Reply
1
Reply Sun 17 Jan, 2010 02:25 pm
@Brandon9000,
Brandon9000 wrote:

Actually, Ringo was then considered the best drummer in town, ...