Top Ten Interns Who Have Had Sex With David Letterman

Forums: Tv, Letterman, David Letterman, Television, Sex Scandal
Email this Topic • Print this Page
Reply Sat 3 Oct, 2009 03:10 pm
Okay, so it's only two so far, but I liked the title anyway. So what do you think of this whole thing? I think Letterman did a very smart thing by throwing this out there the way he did. I have a feeling he'll end up unscathed by this in the end.

A former "Late Show" intern came forward Saturday to say she is one of David Letterman's former flings.

"I was madly in love with him at the time," Holly Hester told TMZ.com. "I would have married him. He was hilarious."

The NYU alum said the relationship started when Letterman asked her on a date to the movies.

A year-long, secret romance ensued, she said, until the funnyman called it off.

Letterman, 62, admitted on air Thursday night that he had affairs with female staffers, but did not name them.

He made the confession while revealing that a CBS News producers had tried to extort $2 million from him, threatening to reveal the sex secrets.

The producer, Joe Halderman, is free on $200,000 bond after pleading not guilty to the blackmail scheme.

He returned to his Norwalk, Conn., home late Friday and left briefly Saturday morning for a trip to the bank.

It was unclear if he returned to the same Bank of America branch where he deposited a phony check Letterman gave him as part of a sting operation.

Halderman, 51, was desperate and debt-ridden after a divorce from his wife.

Until recently, he was living with Stephanie Birkitt, 34, a "Late Show" staffer believed to be one of the women Letterman bedded.

Letterman - who married longtime love Regina Lasko in March - has not spoken since his on-air mea culpa and Birkitt has not been reached for comment. 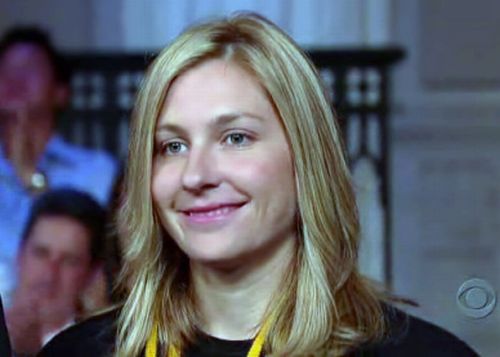 0 Replies
1
Reply Sat 3 Oct, 2009 03:17 pm
If the women did not feel coerced, I don't see that he did anything wrong.
0 Replies
4
Reply Sat 3 Oct, 2009 03:27 pm
@kickycan,
I kind of get it when people get so mad at politicians -- particularly when they're legislative hypocrites (i.e. against gay rights but gay themselves). Then there's the blackmail angle (if a president philanders, there can be serious national security ramifications if he wants to keep it quiet and serious political/ power ramifications if he owns up to it).

And I get when people get mad at Jim Bakker and the like for setting up a whole career about morality blah blah blah and then, whoopsie, Jessica Hahn.

But David Letterman? He's just a cranky old talk show host who hasn't ever made himself out to be much of a human being. I'm not particularly surprised or shocked and as long as there is no sexual harassment/coercion involved, I don't really care.
0 Replies
1
Reply Sat 3 Oct, 2009 03:46 pm
Here's the thing -- I agree that, as long as nobody was coerced and the affairs were between consenting adults, there's no cause for censure. But Lettermman's career depends on his satirical monolgues. He has made fun of every celebrity who ever got their name in the news because of a sexual scandal. So, what do we say here? Let him who is without fault cast the first wise-crack?
2 Replies
1
Reply Sat 3 Oct, 2009 03:50 pm
@kickycan,
All I've read about this has been on Huffpo and it's varied links. I'm mostly stunned by how many people are shocked that people who work together many hours over years do get into sexual relationships. Somewhere around the seventies, corporations got all gaga about harassment, for very good reason. But all such relations are not harassment (even all harassment isn't Harassment) and it has been my impression that some of the more stringent no-liaison rules have been lessening over time. (I have a nurse friend who quietly married a guy she was not supposed to date, and they're still more or less happy after thirty years.)

Re the blackmail stuff, that all seems so yellow novel time, a feature of the forties type true crime series. A guy at this level does this? There's my interest, what brought him to that. A first guess is drug bills, but a more interesting one to me is the whole incredible effort to get your work as a writer into production in tv or movies. I've lived that, and can see that as a good motive. And besides, that was on the note, apparently. Still, whatta jump, to extortion.
1 Reply
2
Reply Sat 3 Oct, 2009 03:54 pm
@Merry Andrew,
Yeah, pretty much.

I really don't see why you have to be personally perfect to make humorous comments about other people's imperfections.

And again, it's not like anyone really thought he was personally perfect before this either, did they? I didn't.
0 Replies
1
Reply Sat 3 Oct, 2009 03:59 pm
@ossobuco,
Answering myself, this seems an obvious screenplay in the making..

0 Replies
4
Reply Sat 3 Oct, 2009 04:08 pm
What a disappoint for Joe Halderman, to have Letterman blow the whole thing on the air. String him up if it can be proven - I mean Halderman, of course.

Letterman handled this well. Remember the story about Jessie Jackson's love child about a decade ago? Probably not. He didn't lie, he didn't cover up. He said he loved his child, had been providing support, and would continue to do so. End of story.
1 Reply
1
Reply Sat 3 Oct, 2009 04:22 pm
Letterman is playing his cards right. He'll come out on top.
1 Reply
1
Reply Sat 3 Oct, 2009 04:24 pm
@roger,
I'm still off on Halderman. Maybe it had to do with not being able to sell a condo on which much was owed (I'm making this up) - well, big financial needs of some sort. I still think there's a strong screenwriter angle...

I feel his wife's pain.

Okay, so it's only two so far, but I liked the title anyway.

He was flippant about the relationships with these women and it was unnecessary for him to bring them into it. In fact, I don't care to hear about the persoanl lives of the Hollywood (or NY) crowd, at all.

Am I the only one who thought Letterman was gratutious and rude?

He was flippant about the relationships with these women
and it was unnecessary for him to bring them into it. In fact,
I don't care to hear about the persoanl lives of the Hollywood (or NY) crowd, at all.