Forums: News, Rap, Cool, Fools, Stupid
Email this Topic • Print this Page
Reply Fri 6 Feb, 2009 11:20 am
Cultural fads come and go. Some are fun; sometimes they're cool and other times they evolve without folks knowing much how or why they evolved.

For instance, the knuckle knock handshake (shown below)

is rapidly becoming popular. But its origin is pretty disgusting.

This form of social acknowledgment originated in prisons with large minority inmate populations. Many prisoners come from third world countries where toilet paper is not used and they STILL don't wash their hands after using the toilet. So. . . . . rather than exchange the disgusting material by shaking a guys hand, prisoners knock knuckles.

By knocking knuckles, they were less likely to be exposed to another man's toilet/wiping habits.

When you engage in knuckle knocking, you are pretty much telling everyone either
A) You do not wash your hands after going to the bathroom, OR;
B) You think the person you're bumping with doesn't wash HIS hands after he goes to the bathroom.

Another "fad" which evolved in prison are saggy pants (shown below) 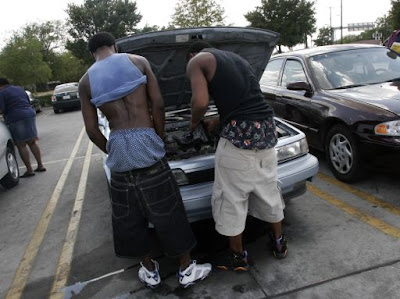 It began in prison when inmates who were too lazy to tie the drawstring on their prison pants, walked around with the pants sagging. It quickly developed into something far worse.

Sooooooo., . . . . . if you walk around with you pants sagging around your ass, you are saying to the world either
A) You were gang raped by men and are being forced to advertise it, OR;
B) You are gay and you want another man to penetrate you anally.

Men wearing ear rings traces its origin back to old sailing days. Men who were merchant sailors and traveled all over the world wore a single gold ear ring so that wherever and whenever they died, the value of the ear ring would be enough to pay for a simple casket and burial.

There's a whole slew of guys who wear ear rings in both ears. That means they go both ways!

Sooooo, if you are a guy and wear an ear ring, now you know the message you ARE IN FACT conveying rather than a message you THOUHGT you were sending.

Piercings developed in Africa as a way for tribal leaders to advertise their tribe and, more importantly, to mark their property or livestock. In humans, piercings replaced branding because so many people died from infections after being branded with a hot iron.

Soooo, if you wear a piercing on your face, you are telling the world that you are someone's property. A slave. You are "owned."

If you wear a ring piercing in your nose, you are telling the world that you are livestock; a cow or other beast.

If you wear a piercing in your tongue, you are telling the world that you are a stupid horse that that needs to be hurt on the tongue to do something . . . . . . to this day, horses are guided by reins that clamp their tongues.

If you wear a piercing in your navel or genitals, you are telling the world that you are someone's personal property, a slave, you are "owned."

Just thought you'd like to know the origins of this latest "fad."

However, a recent study shows kindness isn't the only thing being spread.

One-third of men don't wash their hands after using the restroom, a recent survey by the American Society for Microbiology and the Soap and Detergent Association said.

The survey found that although 89 percent of men in a telephone poll state they wash their hands after using a public bathroom, only 66 percent were seen doing so, an article in USA Today said.

Women also are guilty of lying about hand washing.

Despite the fact that 96 percent of women surveyed claimed they washed their hands after using the bathroom, the researchers only saw 88 percent actually do so.

0 Replies
1
Reply Fri 6 Feb, 2009 05:51 pm
@Zippo,
Zippo - I am familiar with all of the origins you list here. The part however where you tell others what the gestures convey however is rubbish. Two people may knuckle bump as a greeting. The common message is transmitted and received on both ends. Very simple communication. If some third party happens to be in a the room who witnesses the knuckle bump, and the gesture means something else to them, so be it, but the gesture wasn't to them so who gives a ****?

Context, is what your conclusions lack.

For instance many know about Nixon going to China and getting off the plane and throwing up dual peace signs (unknowingly a vulgar gesture in China). Do you plan to tell us what a peace sign conveys? Not without context you won't. It means different things to different people.

As for men and ear piercings. I have both my ears pierced, and I wear ear jewelry every day to work. I am not a bisexual, nor would I choose to convey a message about my sexuality via my piercings. If somebody sees both my earrings and wants to make that conclusion, so be it. They'd be wrong, and they'd be an idiot for using such a meter to determine someone's sexuality.

Sagging pants may have had it's origins in jails etc, but that isn't the message that those who sag convey. It has been more the product of pop culture au 90's gangster rap imagery (which may be the bridge) that lead this to the mainstream. You will see skateboarders and all sorts of people sagging pants these days. Meanwhile, rap videos now show more Blacks in european high fashion.

You're making mountains out of molehills. People are free to express themselves as they wish, without you or anyone else telling them what they are saying.