Who was the audience of the Gettysburg Address?

Approximately 15,000 people are estimated to have attended the ceremony, including the sitting governors of six of the 24 Union states: Andrew Gregg Curtin of Pennsylvania, Augustus Bradford of Maryland, Oliver P. Morton of Indiana, Horatio Seymour of New York, Joel Parker of New Jersey, and David Tod of Ohio.

The precise location of the program within the grounds of the cemetery is disputed. 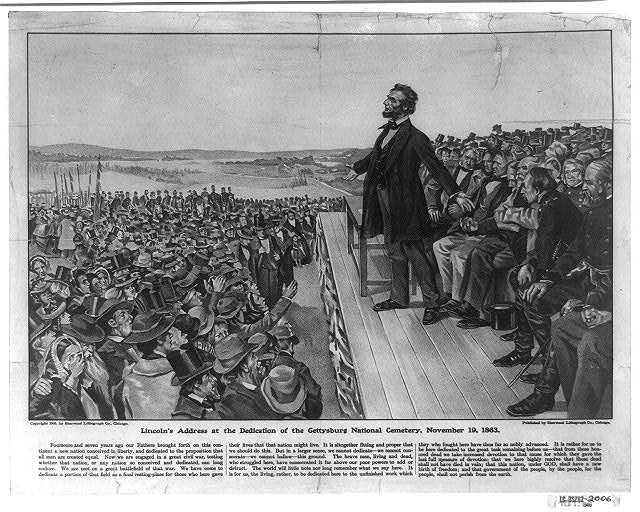 Even though it is a drawing rather than a photograph, it has a perspective that shows the elevated area against the wall of the cemetery and the waterfeature beyond it. A little search on Google Earth or the Gettysburg Foundation site www.gettysburgfoundation.org should locate the approximate site.

In actuality Lincoln was not at the front of the stage declaiming furiously - that honour went to Edward Everett who gave a two-hour speech! It was as fabulously dull as Lincoln's was concise and brilliant.
0 Replies
1
Reply Mon 22 Dec, 2008 01:05 am
This is the image of Lincoln on the day. It took a while to set up and expose an image in those days. He has actually just given the speech, it only took a little over two minutes and had just sat down again. The photographer missed the money shot.