Forums: History, World War One, Veterans, World War I, Great War
Email this Topic • Print this Page
Reply Tue 11 Nov, 2008 10:10 am
The Great War ended 90 years ago today. To me, it was always a very real and present event. I was raised by my grandparents, and my grandfather had served in that war. He had brought his helmet home, and his Springfield rifle (i suspect he purchased that, although, of course, small children don't question such things). He never spoke much of the war, hardly at all, really. I once asked him if he had been wounded, and he smiled at me, said nothing for a moment, and then told me he had been wounded for every day of the week. In his typically gentle sort of way, he communicated to us that it was not something which he would discuss with us.

During the Fourth of July parades, the Spanish War veterans were already too old to march, and the few still left when i was a small boy rode in the back of a convertible. But i was always so proud because my grandfather would be a part of the color guard with the other "First War" veterans, behind whom would march the veterans of the "Second War," of the generation of my parents.

In Flanders fields the poppies blow
Between the crosses, row on row,
That mark our place; and in the sky
The larks, still bravely singing, fly
Scarce heard amid the guns below.

We are the dead. Short days ago
We lived, felt dawn, saw sunset glow,
Loved, and were loved, and now we lie
In Flanders fields.

Take up our quarrel with the foe:
To you from failing hands we throw
The torch; be yours to hold it high.
If ye break faith with us who die
We shall not sleep, though poppies grow
In Flanders fields.

That poem was written by a Canadian doctor, John McCrae, the day after the death of a friend. Below is a picture of John McCrae, sitting in one of Flanders' fields with another friend: 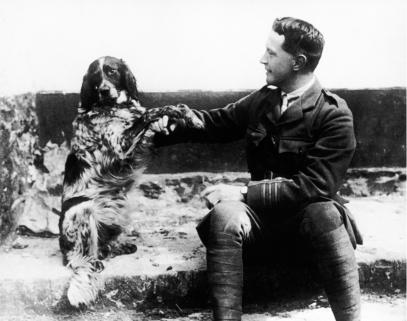 Dr. McCrae contracted a septic disease while treating his fellow countrymen, and died in 1917.
Type: Discussion • Score: 15 • Views: 11,688 • Replies: 68
No top replies
0
Reply Tue 11 Nov, 2008 10:19 am
@Setanta,
My daughter, Butrflynet, added this to her collection of family history. This article and the photos were published in the local newspaper. My great grandfather followed in his father's footsteps and fought in the Spanish-American War and was the third from last surviver to die at age 89.

http://butrfly.net/grandpa_trumley.htm
0 Replies
1
Reply Tue 11 Nov, 2008 10:33 am
@Setanta,
I've quite a lot of recollections - and even if I would forget soem (which I doubt), there are still dozens of phtos.

Two stories really will stuck for ever in my mind:

- a neighbour had been with those troops who were attacked an hour after the armistice was on effect (11h local time) .... and finally couldn't do anything else than to shoot back at the attackers (US troops, who obviously weren't informed),

- I've been to some dozens of the WWI cemeteries (in France): no French soldier (officially) died on November 11. (All French deaths from November 11, some hundreds it is believed, were dated back to the 10th: the French population should start an uproar when they learnt that the fights still were going on that day.)

The German generals didn't want to loose more ground, the French and US wanted to go straight to Berlin ... at least as far as they could until 11 o'clock.

2 Replies
1
Reply Tue 11 Nov, 2008 11:01 am
@Walter Hinteler,
The family history I have actually revolves around the Great War but doesn't touch it too much, at least not the history that I know. The history is more peripheral, mainly because of the ages and genders of the people involved.

My paternal grandmother's family lived in Austro-Hungary and her father and elder brother came to the US in I think about 1913 or so in order to build a better life. My grandmother stayed behind with her mother, older sister and younger brother. They lived on a farm and times were tough.

My great-grandmother died in the big Influenza epidemic and then the family was really down and out. My grandmother and her sister were teenagers; their little brother was I think about 10 or so, maybe even younger. A neighbor used to come in every Thursday in order to make challah for Shabbat. I don't know how they ate otherwise but I know my great-aunt smuggled tobacco for money so I assume that helped, plus there was whatever they were growing on their little farm.

One day there was a blizzard and the neighbor could not get to them. My great-aunt remembered how the challah was made and made it herself. When the neighbor finally got through she realized they could care for themselves so the neighbor stopped coming.

When the war ended, the remainder of the family came to the US, where my great-grandfather and great-uncle had set up a dry cleaning business. I guess they did pretty well for themselves -- the kids grew up and got married and my great-grandfather lived long enough to see me born. It was a very different time.
0 Replies
1
Reply Tue 11 Nov, 2008 11:19 am
@Setanta,

I watched some of the Armistice Day service from London's Cenotaph on television today.

Can't offer any family history about the Great War, but The Guardian newspaper is currently publishing a set of seven booklets about the subject, one each day for a week, and if you like I will bundle them and send them to you, Setanta.
1 Reply
1
Reply Tue 11 Nov, 2008 11:20 am
@Setanta,
My dad was in WWI, Setanta. I have a great photo of him with his lieutenant bars, but the only thing that I recall him saying was something about Russell Hicks. What a surprise to find out that Hicks played Whitney in a movie that I saw on TCM, The Most Dangerous Game.

Some thousands - there was a tv-report on the French_German tv channel 'arte' about this.

The German generals didn't want to loose more ground, the French and US wanted to go straight to Berlin ... at least as far as they could until 11 o'clock.


Actually - that was a different docu.


What I remembered was on BBC (I've seen it in the UK):

Timewatch
The Last Day of World War One
Michael Palin reveals the shocking truth that soldiers continued to be killed in battle for many hours after the First World War Armistice had been signed.
Broadcast on 1 Nov 2008

It's here: http://www.bbc.co.uk/programmes/b00fg9hw
58 minutes - unfortunately, you can't download/watch it anymore.
2 Replies
1
Reply Tue 11 Nov, 2008 01:18 pm
@Walter Hinteler,
my dad was drafted into the german army in the spring of 1916 - he turned 18 in october of that year .
i still have several of his pictures and postcards that i brought with me to canada . he started as an infantry man but was transferred to the medical corps after he was wounded . he served in the somme , but would hardly ever talk about his army life .
when i was a little older - after WW II - he would sometimes tell me that he and his comrades had believed that they had "fought the war to end all wars " - but it wasn't to be - another war came along only about twenty years later .
hbg
0 Replies
1
Reply Tue 11 Nov, 2008 02:41 pm
@McTag,
I would like that, McT--although how we would arrange such an operation i don't know. Let's try to arrange a time when we will both be at the site, i can post my e-mail address and then delete it within a minute--something like that.
1 Reply
1
Reply Tue 11 Nov, 2008 03:02 pm
Erich Maria Remarque's two novels, All Quiet on the Western Front and Three Comrades are both excellent evocations of the war for "the little guy" in the trenches. Sassoon's Memoirs of a Fox Hunting Man and Memoirs of an Infantry Officer and Sherston's Progress are all good novels of the war, too. Faulkner wrote Soldier's Pay about Americans returning from the war, and the war is sometimes eliptically refered to in other parts of his body of work--but apart from Hemingway's typically and appallingly bad prose, i don't know that there is any great American novel of the war (Faulkner's novel, a first effort, is rather poor).

Remarque's two novels are excellent, and the 1930 motion picture with Lew Ayers is not bad--it was the first "talkie" to get an Oscar which was not a musical--it won two, for direction and production, and was nominated for two others. It was banned in several countries, notably in Germany where the Nazis were absolutely obsessed about it, and in France and Italy.

In about 1980 (?) it was done again as a "made for tee-vee" movie, with John-Boy Walton (Richard Thomas) as Paul, and Ernest Borgnine as Katczinsky. It was panned by the critics, but i suspected that a lot of that was because Thomas was unpopular with critics, although it was justifiably criticized for not depicting the real horrors of the trenches. I don't think it is fair to blame Thomas, however, for the screenplay and the direction. They were certainly at pains to make it as historically accurate as they could. The casting of Borgnine as Kat was sheer genius, and I personally think it was Borgnine's best acting. The critics be damned--i think they did a good job.

The great thing about Remarque's novels and the films of All Quiet is that it doesn't matter that it's about Germans--it's about the insanity and the horror and the despair of war. That's exactly why the Nazis were obsessed with preventing its being shown in Germany.-
2 Replies
1
Reply Tue 11 Nov, 2008 03:26 pm
@Setanta,
Nazis ...
In Germany, there is no such culture of remembrance because the war carries the "stigma of defeat" and is viewed as the precursor to the rise of Adolf Hitler, World War II and the Holocaust.

While much of Europe observes sombre silences in memory of the war dead, Germans in the Rhineland are getting dressed up as clowns and taking to the streets to celebrate November 11 as the beginning of the carnival season that culminates in the week before Ash Wednesday in February. Germany will mark its own national day of mourning, called Volkstrauertag, on Sunday November 16 at low-key wreath-laying ceremonies honoring the war dead of all nations.

Neo-Nazis regularly attempt to hijack ceremonies to hail Germany's fallen soldiers. At the biggest war cemetery on German soil, in the village of Halbe south of Berlin, where more than 28,000 mostly unidentified fallen soldiers from World War II are buried, authorities have decided on a rebuilding program to stop Nazis honoring their "heroes" there.

A panel of experts has recommended narrowing the approach road and to set up an open-air exhibition about the victims of war in the square in front of the cemetery. That, they hope, will prevent far-right groups from staging annual rallies there.

From Spiegel-online > they've some very interesting photos at Spiegel, too!
1 Reply
1
Reply Tue 11 Nov, 2008 03:41 pm
@Setanta,
There's a third, less well-known, novel by Remarque about the fate of returning German veterans to civilian life immediately after cessation of hostilities. (Three Comrades is set in the late 1920s, after the onset of the runaway inflation which had hit the Weimar Republic.) It's Der Weg Zuruck (translated as The Way Back.) It's short, more of a novella, but quite moving. I think Remarque is waay underrated as a writer by most literary critics.
0 Replies
1
Reply Tue 11 Nov, 2008 03:53 pm
@Setanta,
Okay good- I've put my e-mail address on my Profile, which you can access by clicking on Name.

BBC programmes and video cannot be seen online outside the UK for reasons of licencing.

In like wise, I cannot see Jon Stewart (The Daily Show) archives.