Trees in description and in art

I'll quote it here (see below).

At the same time, the author alluded quickly to Gustav Dore.

All this makes me want to collate literary tree descriptions and various tree drawings or paintings.

I'll start with this one, hope others join in.


The book I'm reading: Excursion to Tindari, by Andrea Camilleri

quote, typed from the book -

"Exactly halfway between the two towns was a little country road, hidden behind a billboard, which led to a ramshackle rustic cottage, behind which stood an enormous Saracen olive tree that was easily two hundred years old. It looked like a fake tree, a stage prop, something out of the imagination of Gustave Dore, perhaps an illustration for Dante's Inferno. The lowest branches dragged and twisted along the ground, unable, try as they might, to hoist themselves skyward, and thus at a certain point of their progress they reconsidered their effort and decided to turn back towards the trunk, creating a kind of elbowlike bend or, in some cases, an out-and-out knot. Shortly thereafter, however, they changed their minds and turned around again , as if frightened at the sight of the powerful though pocked, burnt, time-wrinkled trunk. And in turning around, the branches took a different direction from the one before. They looked just like vipers, pythons, boas, and anacondas that had suddenly metamorphosed into olive branches. And they seemed to despair, forever damned by the sorcery that had frozen them --- "chrystallized" them, the poet Montale might have said --- in an eternity of tragic, impossible flight. The middle branches, having reached more or less on meter in length, were immediately beset by doubt as to whether they should head skyward or turn earthward to rejoin the roots. "

Alas, my premise is shot, in that I can't immediately find a photo of a Dore illustration of Dante that works re an ancient olive tree.

So, I'll look around for other possible connections ..
Here's a photo of a 1500 yr old olive tree in Greece - 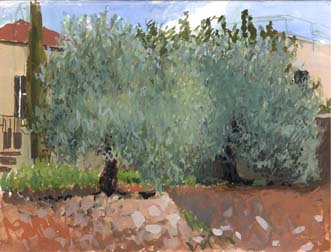 I can't immediately tell from the link who did that drawing. It remind's me somewhat of a Kay Harden ink drawing but I doubt it's by her; elegant in any case. 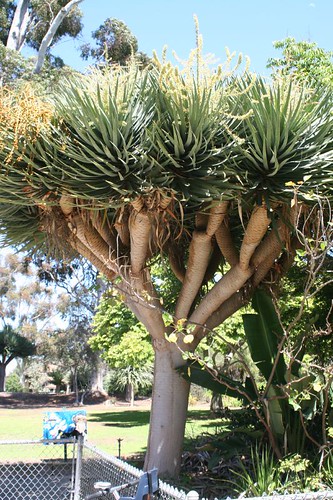 Lots of great olive tree paintings at Google.
0 Replies
1
Reply Sun 26 Oct, 2008 09:09 pm
The Sydney Red Gum (Angophora sp.) has an unusual habit of growth. Its a full sized tree, but the branches don't grow straight. The sort of 'corkscrew' around and some times even reach almost to ground level.

I'll have to see what particular plant it refers to. There are a number of 'flame trees' throughout the world. There are two African named varieties - one has a big orange flower, the other is a wattle and has a yellow spray of flowers.
1 Reply
0
Reply Sun 26 Oct, 2008 09:44 pm
@Mr Stillwater,
Thanks for the photo, Stilly, and now I'm wondering about the Flame trees of Thika, of which I've heard.. That's one of those books I wanted to read that form an unread mountain.

Shaking head.. there's a tree I'm remembering that might be that and you talk about two african trees..
the one I'm thinking of is at the tip of my tongue but apparently hovering unavailable. Starts with a B, I think.
2 Replies
1
Reply Sun 26 Oct, 2008 09:49 pm
@ossobuco,
Yeh, Brachichiton acerfolius is the one I was thinking of (just looked it up in my Sunset Western Gardens book, tucked under my computer desk.). Native to australia...

Starts with a B, I think

It all depends if you have a common name (variable) or the species name (only one). I will hazard a guess tho and offer the Boab Tree:

1 Reply
1
Reply Sun 26 Oct, 2008 09:56 pm
@ossobuco,
Illawarra Flame Tree; a native of Sydney and sthn districts. Very showy and unusual flower. Also known as the Kurrajong (the Koori name) - yields a pod of seeds that can be roasted and eaten or turned into a flour.
0 Replies
0
Reply Sun 26 Oct, 2008 09:58 pm
@ossobuco,
Cough, certain pals frown at my view of the dominance of latin names re plants - just two days ago one said, what is the real name? meaning the common name - but this is a nifty example of why common names can only add confusion.. not least when a designer specifies a plant.

1 Reply
1
Reply Sun 26 Oct, 2008 10:10 pm
Annoying or not, the use of species names is vital to the nursery trade. A common name can be any number of plants from different genera. However, it does require a good knowledge of Latin and classical Greek to decode the name - these days they tend to use some-ones name.
1 Reply
1
Reply Sun 26 Oct, 2008 10:11 pm
@ossobuco,
San Vicente Boulevard crosses from west Los Angeles to the near Pacific with an center island of grass and Erythrina caffras. Major gorgeous.


I had a teacher once who specified many, something like forty, Erythrinas for a hotel in San Diego.

The landscape crew topped them.

The World Tree is a motif present in several religions and mythologies, particularly Indo-European religions. The world tree is represented as a colossal tree which supports the heavens, thereby connecting the heavens, the earth, and, through its roots, the underground. It may also be strongly connected to the motif of the tree of life.

Specific World Trees include Yggdrasil (or Irminsul) in Norse mythology, the Oak in Slavic and Finnish mythology, and in Hinduism the Ashvastha (a Sacred Fig).

1 Reply
1
Reply Sun 26 Oct, 2008 10:13 pm
@Mr Stillwater,
Alas, I've never heard before of Delonix. Do know Brachychiton and Erythrina, and while I've not seen Poinciana, have read about it.
1 Reply