Trees in description and in art

Re: Mr Stillwater (Post 3451724)
Hey, it's the use of common names that can camfladulate me, not the latin.

You never had to learn them professionally. Whilst I was studying Horticulture back when, there was a major change to the nomenclature! Fabaceae was redefined into three new sub-families; Faboideae, Caesalpinioideae & Mimosoideae. Crap! Australia is also 'blessed' with over 600 named species of Acacia! The horror, the horror....
1 Reply
2
Reply Mon 27 Oct, 2008 01:28 pm
@Mr Stillwater,
Yes, I did - I'm a landscape architect...
but we learned our plants with an eye to what we would be using in designed landscapes, so we didn't have to memorize every possible tree, shrub, etc.
1 Reply
1
Reply Tue 28 Oct, 2008 01:48 am
@ossobuco,
Quote:

When my first daughter was born, I went out the back of the hospital... these trees seemed to be everywhere...

My daughter is still convinced that the jacaranda in their backyard flowers just especially for her birthday.

They are so ubiquitious in Australia that most Aussies think that they are a native! One town, Grafton, has had a regular festival every year since 1935!

On the 29th October 1935, Grafton's first Jacaranda Festival made its debut before 4000 enthusiastic fans in brightly illuminated Jacaranda Avenue (in Pound Street).

The winner of the annual 2007 Jacaranda Queen Crown:

Yggdrasil
0 Replies
1
Reply Wed 8 Feb, 2017 01:46 pm
An interesting tree story from the North Coast Journal, still a favorite newspaper of mine - I used to live around there:

http://www.northcoastjournal.com/humboldt/dawn-redwoods-alive-and-kicking/Content?oid=4329441
A photo from the article by Barry Evans - the photo by him as well:

The article isn't all that long, and quite a tree tale... 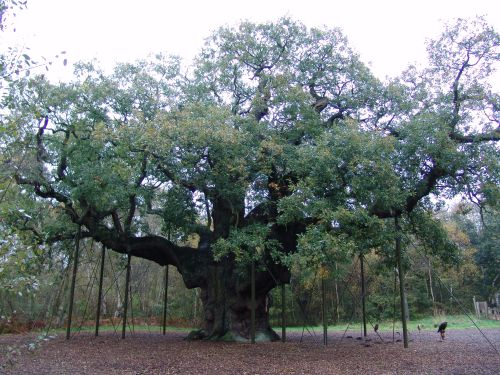 The Major Oak is a large English oak (Quercus robur) near the village of Edwinstowe in the midst of Sherwood Forest, Nottinghamshire, England. According to local folklore, it was Robin Hood's shelter where he and his merry men slept. It weighs an estimated 23 tons, has a girth of 33 feet (10 metres), a canopy of 92 feet (28 metres), and is about 800–1000 years old. In a 2002 survey, it was voted "Britain's favourite tree". In 2014 it was voted 'England's Tree of the Year' by a public poll by the Woodland Trust, receiving 18% of the votes.

It received its present name from Major Hayman Rooke's description of it in 1790.

A lot of the creative were very talented ex Hollywood people blacklisted by the McCarthyites, (although I didn't know that at the time.)
0 Replies
1
Reply Wed 8 Feb, 2017 02:56 pm
Meantime, I still miss Stillwater..
0 Replies