Forums: History, Literature, Communism, Justice, Kundera
Email this Topic • Print this Page
Reply Tue 14 Oct, 2008 05:55 pm
Collaborators, secret agents, etc.. that issue periodically arises in the Central and Eastern European press. All sorts of people went through the public mill, people pointing fingers, saying “what a shame” when a personality of public life is outed for having links with the secret police in one way or another (as if they were any kind of heroes back then…but I digress).

It’s a complex moral dilemma. I myself do not know what kind of a person I would have been in the 1950s (would I be brave and end up in a working camp or would I be a nodding apparatchik?), but beyond that, it’s a matter of establishing facts correctly, it’s a matter of judgment " what purpose does this ‘unveiling’ serve (other than, in most cases, having a best-selling popular scandal)… how to balance history with justice, how to deal with these topics with some sort of a nuance and not as if it was a repeat of political trials…from the other side of the barricade. How does a conscientious professional (journalist, historian, educator...) approach this subject?

The media always portray these stories as a sentence for cowardice, if not outright treason. And surely facts must try to be established (even though I would think twice before basing a large scale accusation on one document from the secret police archives. Back in the day, you could become an ‘informer’ of the police just by saying hello to someone and never even know about it… Not to mention countless fabrications just to make police reports look ‘better’ at the time. They ,too, had quota to fill…).

They release these “news” without checking facts, without any depth, which can lead to much ruin and suffering. But let’s say the document is true and tried and likely it is… the approach still is appalling, reductionist, judgmental. Certainly does not foster any additional understanding of an era.

Story of the Czech folk singer Jaromir Nohavica is very similar to that of Kundera now. And there are countless others. For some reason, former dissidents are a popular target for this kind of a story, perhaps because they were always sort of suspicious to the others (“what was in it for them?”), perhaps because they tend to be high profile in today’s politics or cultural life, or most likely both. In these two cases you have two people who spent decades in the underground and exile, vocalizing against the regime when the silent majority didn’t….but today they are remembered more as hypocrites and collaborators.

But I will stop here, as this has turned into a rather lengthy rant. Long story short, I believe it’s an important subject, especially because the media are only issuing a value judgments, reductionist and simplistic stories that do not help to understand this most painful period of our past, quite the contrary… and, perhaps obviously from this post, it’s a topic that makes emotions run high…

The original file on M. Dvoracek (by the Institute for the Study of Totalitarian Regimes) is here: http://www.ustrcr.cz/en/recollections-of-anti-communist-fighters-and-resistants-miroslav-dvoracek

Unlike the paper, they qualify the report with this disclaimer: “The story of Miroslav Dvořáček was compiled from information gathered by security bodies at the time of the investigation. It is necessary to take this into account and approach the story accordingly”.
Kundera denies he reported a western spy in 1950 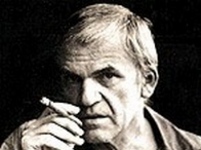 Allegations of a shady past have made Milan Kundera break his traditional silence.

Prague - Czech-born writer Milan Kundera yesterday talked to Czech journalists for the first time after many years of silence, in an effort to fight an allegation that he reported a western secret agent to the communist police in 1950.

In a telephone interview with the ČTK agency Kundera denied the allegation. He said the details, published by the Institute for the Study of Totalitarian Regimes (ÚSTR), were false. 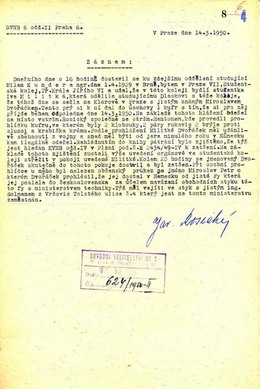 The allegations against Kundera were first aired by yesterday's issue of the weekly Respekt. The magazine reports that Kundera in 1950, while being a student at Prague's Academy of Performing Arts, tipped the police about Miroslav Dvořáček, a secret agent sent from Germany.

Dvořáček was arrested and sentenced to 22 years in communist lagers. At early stages of the trial he was even facing the death penalty.

The ÚSTR yesterday presented the media with new findings, including a detailed description of Dvořáček's activities in Czechoslovakia. Dvořáček had emigrated from Czechoslovakia to Germany in 1948 and later came back as a secret agent working for the West.

His task, assigned to him by his boss, General František Moravec, was to contact the then director of Chemapol, Mr Václavík, solicit him to provide information about the chemical industry and arrange a method of communication.

During the second attempt to contact Mr Václavík, Dvořáček made himself vulnerable when he stored his suitcase with his friend Iva Militká at the student hall Kolonka. Militká confided to her friend Miroslav Dlask, also a student, who in turn told Kundera.

The ÚSTR claims that Kundera immediately informed the police. When Dvořáček returned to the hall in the evening to pick up his bag, the police were already awaiting him.

In the end Dvořáček did not receive the death penalty demanded by the prosecutor, but was sentenced to 22 years in jail. In addition to that, he was handed a fine worth CZK 10,000, stripped of his citizen's rights for 10 years and all his belongings were confiscated.

He served his term in several prisons, including one of the toughest lagers, Vojna near Příbram, where prisoners had to work under atrocious conditions. He was only released at the end of 1963, after almost 14 years.

Five years later Dvořáček emigrated to Sweden, where he is living today. He has always believed that the informer was his friend Militká.

Type: Discussion • Score: 0 • Views: 4,187 • Replies: 4
No top replies
1
Reply Tue 14 Oct, 2008 06:03 pm
@dagmaraka,
Thanx for posting that, Dag. A much shorter version of the story has appeared here and there in the American media. Most people I've talked to seem to think that Kundera was set up. They prefer to believe him rather than the (admittedly uncorroborated) documents.
1 Reply
1
Reply Tue 14 Oct, 2008 06:07 pm
@Merry Andrew,
as do i, actually... the police reports at the time were written in a most haphazard way, often exaggerated, or even made up... i would not be surprised if he really didn't even know Dvoracek, then again, it's a word against a word...we'll never really know.