Farrakhan on Obama: 'The Messiah is absolutely speaking'

Ignorance - Anything with which a Liberal disagrees
0 Replies
1
Reply Mon 13 Oct, 2008 05:59 am
@OCCOM BILL,
They were there to listen to Farrakhan. Farrakhan wants them to support Obama. Obama will take the support of people who support Farrakhan.

That is a character problem Obama has to deal with.
0 Replies
1
Reply Mon 13 Oct, 2008 06:00 am
@Cycloptichorn,
Open your other eye and see the facts and the reality.

The fear mongerer is Farrakhan telling his people to vote for Obama.
1 Reply
1
Reply Mon 13 Oct, 2008 09:51 am
@Woiyo9,
Well I don't quite agree with that Woiyo. I don't think it necessarily says anything about Obama that Farrakhan endorsed him except in the sense that somebody like Farrakhan sees Obama as a messianic figure and somebody that young people should follow. The fear factor doesn't really fit there. But it isn't irrelevent either.

So what is it about Barack Obama that makes him somebody that a Farrakhan and his congregation or members of ACORN or William Ayers or Hugo Chavez or any number of radicals, domestic and foreign, hold up as someone to be admired, revered, adored, followed, lifted up? And is that something that deserves a closer look? Is that something of concern? Something to be afraid of?

Conservatives are excoriated for asking such questions. But if a similar number of radical national leaders and American radical groups were holding up John McCain as someone to be admired, revered, adored, followed, lifted up, you can bet McCain's opponents would be advertising that as the kind of person McCain is and it would be a huge negative. And they wouldn't be the least bit reserved or shy in doing so.
0 Replies
1
Reply Mon 13 Oct, 2008 01:30 pm
How do you know that you're dealing with religious fervor more than politics? Religious fanatics do not question and in fact defend their religious leaders: 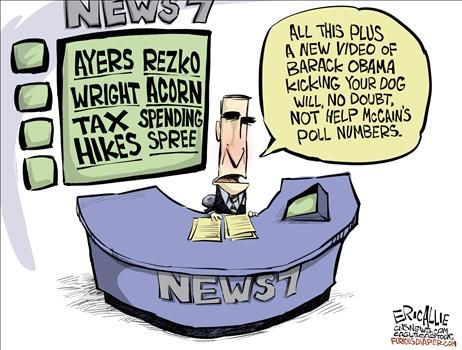