Forums: Humour, Humor, Totally Fucking Awesome, Passive Aggressive Notes, Passive Aggressive
Email this Topic • Print this Page
Reply Fri 15 Aug, 2008 09:47 am
If you are as lucky as I am, and your horrible boss has been on vacation all week, please enjoy wasting time at the delightful http://www.passiveaggressivenotes.com/ 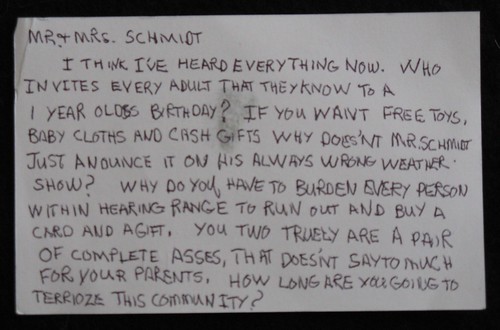 Care to share any of your own? Ones you've received, or even penned?

I was gonna post something really passive aggressive, but then I got afraid your thread would be too popular and decided not to.
1 Reply
1
Reply Fri 15 Aug, 2008 09:57 am
@DrewDad,
Leaving an angry note--where you are free to say things you wouldn't to someone's face--is by nature passive-aggressive.
0 Replies
2
Reply Fri 15 Aug, 2008 10:02 am
I have a bunch of notes somewhere, gargamel, that were given to me by a friend. This guy owns a house in the city and there is an old garage out back with four stalls and only the first two, closest to the alley, are in use. The other two went years without inspection and my friend, finally deciding to do so, discovered a crack-head couple had been living there for quite some time, judging from the notes on the wall and the clothing piled up in the corner. There was also a flimsy mattress and, like I said, a plethora of notes tacked to the wall. They were hysterically funny. One of them the woman wrote, "Were are you? I try to make a home here and you go off to buy crack. I might not be here wen you get back"

You JERK! Next time you park in my neighborhood, don't take up two spaces, you selfish bastard. 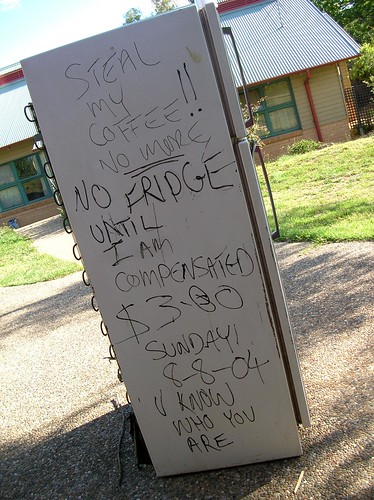 Wow, I just decided to read the instructions on the new site. I like the instant placing of our messages between the quotes, as I always forgot to do that. I also like the self policing . Im not one who gets particularly offended at **** or cock sucker. Such words allow the Pennzy spices of english to be sprinkled on our sentences. I do miss the little pouty girl in the bikini who appeatred in almost all of my strings. I shall miss her .
1 Reply
1
Reply Sun 17 Aug, 2008 02:27 pm
@farmerman,
apparently I dont quite have it down to a practice yet. Ill get it, dont mind me .
0 Replies
2
Reply Tue 19 Aug, 2008 02:31 pm
Wow. I'm so bored I'm actually going to participate in one of my own shallow, two-page threads.

So not long ago there was a sign posted in the men's bathroom on my floor here at Bored Shitless Inc. It was a poorly-written, scattershot tutorial on hand washing, a passive agressive way to police company hygeine. It was very stupid, and something had to be done about it. This was back when I still had the enthusiasm to pull pranks at the office. I have since been lobotomized.

So I snatched the sign off the wall, stealthly scanned it and emailed it to myself, and returned it to its original place. I then killed about an hour trying to replicate the font on Microsoft Word. I devised a parody, a tutorial on back shaving, which I then PDFd, printed, and taped up in the hand washing sign's place.

I unfortunately cannot post PDFs here, so I will just copy and paste the text of the original, and then that of my parody.

Washing your hands may seem rather
unsophisticated compared to today's
medical advances, but it works. Washing
your hands reduces the rate of
bacterial and viral infections by 1/3
to 1/2, and gastrointestinal infections
by 80%. "Frequent hand-washing is one
of the best ways to prevent the spread of
infectious disease," say the Centers for
Disease Control.
You should wash your hands before,
during, and after food preparation; before
eating; after using the bathroom; and
after touching pets, animals, or waste of
any kind. To wash your hands: apply soap
and rub your hands together vigorously
for 10-15 seconds not forgetting under
your finger nails, rinse and dry your hands
after.

Stupid, right? Replete with pretentious and unnecessary semicolons. I now give you my sign, which was removed after ten days.

Shaving your back may seem rather
unsophisticated compared to today’s
medical advances"e.g. electrolysis"but it works.
Shaving your back reduces the rate of
overheating and combustion by 1/3 to ½,
and public embarrassment by 80%.
“Frequent back-shaving is also one
of the best ways to prevent the spread of
back lice,” says the Center for Back Hair Control.
You should shave your back before
competitive swimming and running events,
before cooking shirtless near a stove,
and before camping in the woods during hunting season.
To shave your back: procure a long sturdy stick,
such as you would before roasting marshmallows
around a campfire; fasten the shaving razor of your choice
to the end of the stick; apply a large quantity
of shaving cream to a towel spread across the floor;
lie with your back against the towel;
using your crude back-shaving stick,
reach over your shoulder and remove hair
with sure, steady strokes.
0 Replies