there was one question to which the country representative always answered with a firm NO !
the question was : "can anyone i your country ever go bankrupt from from excessive health care costs ? " .

the president of the switzerland (the swiss federation) answered with an astonished : "THAT WOULD BE A SCANDAL ! " .

Co-payments: None for most services; some co-pays for dental care, eyeglasses and 5 percent of prescriptions. Young people and the elderly are exempt from all drug co-pays.

What is it? The British system is "socialized medicine" because the government both provides and pays for health care. Britons pay taxes for health care, and the government-run National Health Service (NHS) distributes those funds to health care providers. Hospital doctors are paid salaries. General practitioners (GPs), who run private practices, are paid based on the number of patients they see. A small number of specialists work outside the NHS and see private-pay patients.

How does it work? Because the system is funded through taxes, administrative costs are low; there are no bills to collect or claims to review. Patients have a "medical home" in their GP, who also serves as a gatekeeper to the rest of the system; patients must see their GP before going to a specialist. GPs, who are paid extra for keeping their patients healthy, are instrumental in preventive care, an area in which Britain is a world leader.

Average family premium: $280 per month, with employers paying more than half.

Co-payments: 30 percent of the cost of a procedure, but the total amount paid in a month is capped according to income.

What is it? Japan uses a "social insurance" system in which all citizens are required to have health insurance, either through their work or purchased from a nonprofit, community-based plan. Those who can't afford the premiums receive public assistance. Most health insurance is private; doctors and almost all hospitals are in the private sector.

How does it work? Japan boasts some of the best health statistics in the world, no doubt due in part to the Japanese diet and lifestyle. Unlike the U.K., there are no gatekeepers; the Japanese can go to any specialist when and as often as they like. Every two years the Ministry of Health negotiates with physicians to set the price for every procedure. This helps keeps costs down.

Co-payments: 10 euros ($15) every three months; some patients, like pregnant women, are exempt.

What is it? Germany, like Japan, uses a social insurance model. In fact, Germany is the birthplace of social insurance, which dates back to Chancellor Otto von Bismarck. But unlike the Japanese, who get insurance from work or are assigned to a community fund, Germans are free to buy their insurance from one of more than 200 private, nonprofit "sickness funds." As in Japan, the poor receive public assistance to pay their premiums.

How does it work? Sickness funds are nonprofit and cannot deny coverage based on preexisting conditions; they compete with each other for members, and fund managers are paid based on the size of their enrollments. Like Japan, Germany is a single-payment system, but instead of the government negotiating the prices, the sickness funds bargain with doctors as a group. Germans can go straight to a specialist without first seeing a gatekeeper doctor, but they may pay a higher co-pay if they do.

Average family premium: $650 per year for a family for four.

Co-payments: 20 percent of the cost of drugs, up to $6.50; up to $7 for outpatient care; $1.80 for dental and traditional Chinese medicine. There are exemptions for major diseases, childbirth, preventive services, and for the poor, veterans, and children.

What is it? Taiwan adopted a "National Health Insurance" model in 1995 after studying other countries' systems. Like Japan and Germany, all citizens must have insurance, but there is only one, government-run insurer. Working people pay premiums split with their employers; others pay flat rates with government help; and some groups, like the poor and veterans, are fully subsidized. The resulting system is similar to Canada's -- and the U.S. Medicare program.

How does it work? Taiwan's new health system extended insurance to the 40 percent of the population that lacked it while actually decreasing the growth of health care spending. The Taiwanese can see any doctor without a referral. Every citizen has a smart card, which is used to store his or her medical history and bill the national insurer. The system also helps public health officials monitor standards and effect policy changes nationwide. Thanks to this use of technology and the country's single insurer, Taiwan's health care system has the lowest administrative costs in the world.

What is it? The Swiss system is social insurance like in Japan and Germany, voted in by a national referendum in 1994. Switzerland didn't have far to go to achieve universal coverage; 95 percent of the population already had voluntary insurance when the law was passed. All citizens are required to have coverage; those not covered were automatically assigned to a company. The government provides assistance to those who can't afford the premiums.

How does it work? The Swiss example shows that universal coverage is possible, even in a highly capitalist nation with powerful insurance and pharmaceutical industries. Insurance companies are not allowed to make a profit on basic care and are prohibited from cherry-picking only young and healthy applicants. They can make money on supplemental insurance, however. As in Germany, the insurers negotiate with providers to set standard prices for services, but drug prices are set by the government.

What are the concerns? The Swiss system is the second most expensive in the world -- but it's still far cheaper than U.S. health care. Drug prices are still slightly higher than in other European nations, and even then the discounts may be subsidized by the more expensive U.S. market, where some Swiss drug companies make one-third of their profits. In general, the Swiss do not have gatekeeper doctors, although some insurance plans require them or give a discount to consumers who use them. 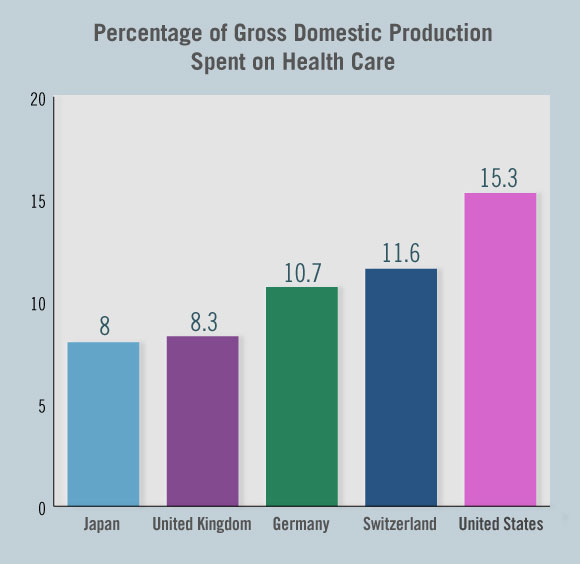