Forums: Humor
Email this Topic • Print this Page
Reply Tue 23 Oct, 2007 08:40 am
Recently I posted a thread about the impending doom of our species. I fear I may have spoken too soon, for the author of my new favorite blog is doing God's work, making the world a better place. 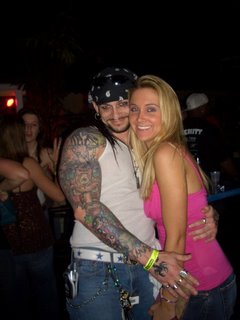 What's wrong with that guy?

What's wrong with that guy?

He has on more makeup than the girl? 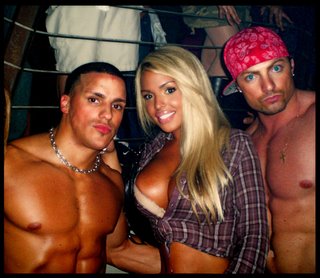 Hahaha! That guy on the right made my day! He's even got fake blue eyes!

He looks like what would happen if Kid Rock and Tommy Lee simultaneously impregnated Pamela Anderson, and the resulting offspring took steroids and got a job at your area mall foodcourt as a cook for Sbarro.

Tell us how you really feel.

I looked on that website, and damn, some of those pictures took me back.

I remember having to exist in the same space as these knuckle dragging, mouth breathing troglodytes for entire minutes at a time.

Even thinking about it, my face is drawing up toward the center, to a pinched little mass on the tip of my nose.

You only have about 5 million times the things to offer than those dopes.
0 Replies
1
Reply Tue 23 Oct, 2007 06:35 pm
I just spent over two hours looking at that site. That guy is a BOMB! It took a second or two until I understood what he wanted with those pictures, then it hit me! It's all about agoodlooking girl with a guy who tries to look better than her, which the boys, invariably, cannot do! And the looks on the supposed "tuff" guys from the "hood"! Instant hilarity!
0 Replies
1
Reply Tue 23 Oct, 2007 07:05 pm
No, I think it's because they're douchebags.

I thought of something before....

You know how slappy will give guys encouragement to be "confident" and make with the jokes, etc?

Whenever he does that, I picture these guys.

Like, who the hell but some chick who maybe has some good looks, but doesn't have 2 brain cells working would want to spend more than 30 seconds with you?

Oh, I know, I must be jealous.

I love that! It really makes me happy to see men who've clearly spent time looking in the mirror trying out different expressions to see what looks most sultry... *snork* I guess if we can't get beyond making women try to live up to impossible beauty ideals, the next best thing is for men to start making themselves miserable and self-conscious too!

I thought the chicks were supposed to be good looking?

I'm kinda with you there. The people on that site deserve each other. They can have all the little douchelets they want.
0 Replies