Forums: Australia, Hingehead, Cyclone Yasi, Blog, Weather
Email this Topic • Print this Page
2
Reply Wed 2 Feb, 2011 06:51 am
Interesting comparison. This is Yasi imbedded on a map of the US mainland:

This is a satellite view of the blizzard sweeping over most of the US at the moment:

Not sure how Hinge powers his tweets, but don't panic if we don't hear more.

Emergency services likely to be no longer able to respond...and news is hard to come by as power fails.

You guys may be able to access this...not sure.

hoping it will deviate more, but Innisfail is gonna be clobbered, lotsa power out now

Sun has set - now we sit and play 'what the heck was that?'

listening to a lady talking on ABC news... so sad, she's trying to sound so brave but is really scared, says there's lots of crashing around upstairs - she's in a newly built house that had a bunker built underneath - says she doesn't even want to think about what has happened above her


not so good re roof it that happened

North Queensland's small coastal communities have borne the brunt of Cyclone Yasi's fury, while the region's major cities of Cairns and Townsville have escaped relatively unscathed.

It appears Yasi, billed as a "a monster, killer storm", has not claimed any lives, nor caused any serious injury, a relieved Premier Anna Bligh said on Thursday morning.

Authorities had feared that Yasi - the first category five cyclone in a century to cross the coast - would cause widespread destruction across north Queensland, comparable to 2006 Cyclone Larry.
Advertisement: Story continues below

Small communities including ground zero at Mission Beach, where Yasi hit at midnight, nearby Tully, Innisfail and Cardwell have been hardest hit by Yasi's violent winds and rains.

Apocalyptic is one word being used to sum up the scene at Mission Beach.

Cairns and Townsville, where thousands spent a very long, nervous night in powerless evacuation centres, appear to have been spared any serious structural damage, and worst-case scenarios about damaging storm surges.

"The early news is not anything like I expected to hear this morning from a category five cyclone," Ms Bligh said, describing the absence of reports of deaths or injuries as a huge relief.

But there was a note of caution: "I do stress in many cases we are yet to see any assessments."

Authorities were yet to get into places like Cardwell, where a large storm surge was expected.

"It's far too early yet to start talking about dodging bullets."

The scene at ground zero has been described by one Mission Beach businessman as apocalyptic.

The manager of the Elandra Resort David Brook said the area now looked like "Vietnam (in the war movie) Apocalypse Now".

Trees are down, cars have been swept away, roofs have been torn off and the sand on the beach is gone.

"Nothing's been spared. The devastation is phenomenal, like nothing I've ever experienced," the veteran of at least five cyclones told the ABC.

Police who bunkered down in the Mission Beach cop shop say they don't know how bad the damage is, as it's still to dangerous for a proper look around.

But officer in charge Sergeant Dan Gallagher said trees had been reduced to sticks, streets were littered with debris, and some buildings had been damaged.

Tully, just inland from Mission Beach, is among the worst hit with roofs torn from homes, and banana and cane crops decimated.

Cassowary Coast Councillor and Tully resident Ross Sorbello said there were scenes of mass devastation in the town, with the roof torn from his mother's home where he took shelter.

He was forced to abandon the property with his mother and wife and take shelter in a car. Many other residents had similar stories of roofs peeled back in winds the bureau has put at up to 290km/h.

"(Cyclone) Larry was a boy compared to this," he said.

"People are calling up telling me they've got roofs off, one farmer said he had a great big shed blow away."

The premier said early reports suggested about 90 per cent of Tully's main street had been extensively damaged.

Tully resident Stephanie Grimaz said houses in her street had been ripped apart.

"The flat from across the street is in our front yard and we can see other houses which have just been destroyed," she told AAP.

"There are sheets of iron everywhere, the streets are just full of debris."

The situation in Cardwell, which was evacuated before Yasi hit, remains unclear but forecasters had said a very high storm surge would inundate the town.

"I've been through about half a dozen cyclones and this is the first one that when it hit land, it just kept pumping. It didn't back off at all," he told the Nine Network.

"All night it was like standing beside a 747 with the engines roaring, and trees flashing and bashing, and things going bump in the night."

At Innisfail, which was devastated by Cyclone Larry in 2006, Cassowary councillor Bill Horsford says daylight has revealed a devastated landscape.

"It's just like the place has been sprayed with napalm, there's hardly a green leaf around, all of the beautiful mountains are now brown," he told the ABC.

Major General Peter Cosgrove, who led the recovery effort after Cyclone Larry, said the main priority must be counting heads.

"It's particularly important in rural communities where you have farmers that are isolated. Emergency workers have to make sure people are safe," he told the Nine Network.

The premier said a major logistical task was now looming, initially to free up evacuation centres for people whose homes had been hit, and then to rehouse those people.

"We don't know the extent of it yet, but we are planning for a very significant homelessness problem, for potentially, you know, several thousand people," she said.

Yasi is now a category two, but remains a dangerous storm front, the Bureau of Meteorology says.

It's making a beeline for inland communities including Georgetown with other towns such as Hughenden, Richmond and Julia Creek also in its sights as it weakens.

Yasi is expected to arrive at Mt Isa - 883km west of Townsville - on Thursday night as a tropical rain depression. 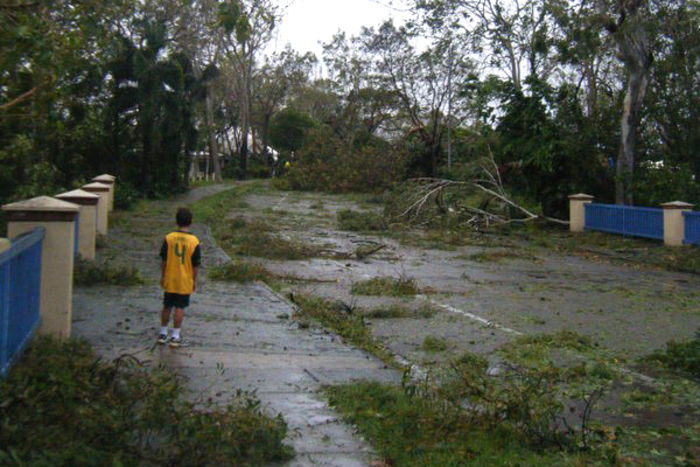 Here are some that caught my eye:

0 Replies
2
Reply Wed 2 Feb, 2011 07:08 pm
Not to ignore the horror, to the contrary, but building codes and some materials may change. Not that I know the local codes. Just that California building has changed over the years re our dealing with earthquakes.