A woman was motivated by "naked greed" when she used her position to steal more than $340,000 from taxpayers, a judge has told a court in far north Queensland.

Sakina Lyn Morgan, 27, pleaded guilty on Tuesday in the District Court in Cairns to 11 offences.

She stole money earmarked for Indigenous employment projects and attempted to steal another $849, 900.

The offences were committed while Morgan worked as an Indigenous contract manager for the Commonwealth Employment Department in Cairns, and after she resigned.

The court was told Morgan became angry after being refused leave without pay and being overlooked for voluntary redundancy.

She transferred almost $80,000 of department funds into her sister's account before she resigned in June 2011.

She then stole security cards from a former colleague to access the building on a public holiday and transferred more money to her own accounts.

Judge Brian Harrison told Morgan she was in a position to help Indigenous people but instead squandered more than $300,000 on luxuries.

The court heard while on bail in October last year, she donned a fake pregnancy belly and convinced a cleaner to give her his security card for an audit, which she used to gain access to her former employer to steal more money.

"No regard for the Commonwealth, no regard for the people of Australia whose money you tried to help yourself to again after you'd already squandered well in excess of $300,000 in the space of eight months and had nothing whatsoever to show for it,"

"I'm told your motivation was anger – it seems to me that was a long time to maintain the rage.

"It seems more likely to me that your motivation was naked greed and that’s how I treat what you did."

Morgan was sentenced to seven years' jail and her sister, Siobhan Atima Morgan, 25, was ordered to serve three months of an 18-month sentence.

What a dreadful tragedy!
0 Replies
1
Reply Fri 19 Dec, 2014 02:09 pm
Very strange--just after i read your post, there was a news story on the radio about the killings in Cairns. They said that a woman was also found, who is the mother of all but one of the children. She had been stabbed repeatedly in the chest, but was said to be in stable condition.
0 Replies
1
Reply Sat 20 Dec, 2014 12:40 am
The mother, with the wounds, has been arrested for the murders

Skytrans staff might have to leave town in search of work, with the company now in voluntary administration
http://www.cairnspost.com.au/business/skytrans-staff-might-have-to-leave-town-in-search-of-work-with-the-company-now-in-voluntary-administration/story-fnjpusdv-1227174674376

I imagine in the upcoming state election will ALP will take back all the seats it lost in the last election. And my very unbrave prediction is that Cairns state MP Gavin King (former editor of the Cairns Post and Murdoch lickspittle) will be used to mop the electoral floor by counciller Rob Pyne (a personal friend and former work colleague)
0 Replies
3
Reply Wed 11 Feb, 2015 02:52 pm
Some bad news for us domestically house got inundated with filthy water during the weekends downpour (over 300mm) 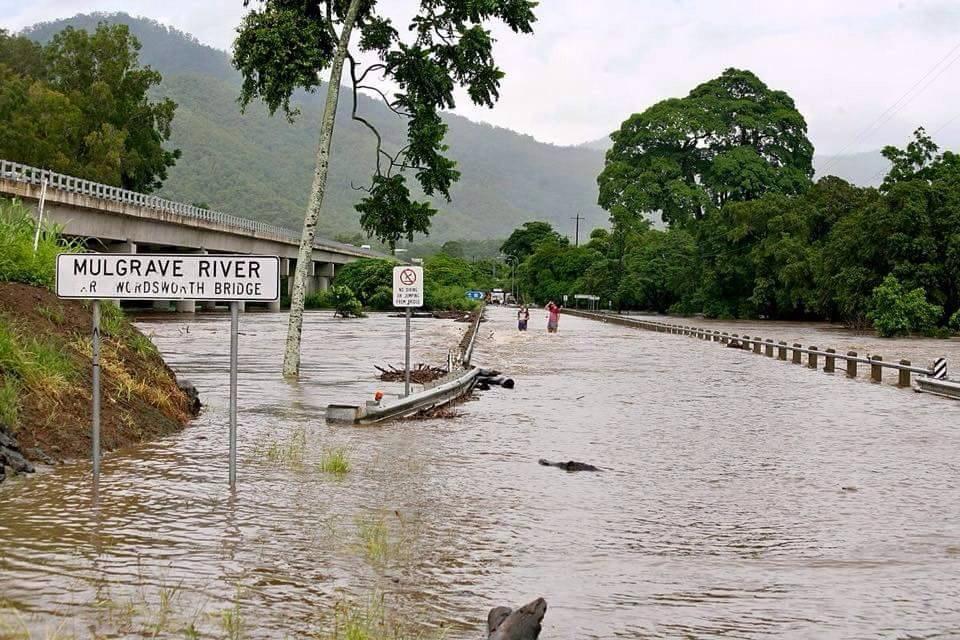 By Jane Wardell and James Regan

SYDNEY, Feb 20 (Reuters) - Tens of thousands of Australians hunkered down on Friday as a powerful cyclone crossed the northeast, damaging houses, bringing down trees, cutting power lines and causing flash flooding, while a second storm made landfall to the west.

The major storm caught Queensland state almost unawares after it intensified in just a few hours before slamming into the coast midmorning as a category 5 system - the highest rating.

Emergency services scrambled to evacuate thousands of homes in the direct path of Cyclone Marcia before pulling out and warning anyone who had not left to barricade themselves inside to avoid wind gusts peaking at 285 kph (177 mph).

Rail lines to coastal ports, an essential part of Queensland's A$280 billion ($218 billion) commodities export-driven economy, were brought to a standstill.

"Stay indoors, don't go outside," Queensland Premier Annastacia Palaszczuk told a news conference as the storm passed over the coastal town of Yeppoon, home to 16,000 people about 550 km (340 miles) north of the state capital, Brisbane.

She warned the 75,000 residents of Rockhampton, just south of Yeppoon, that Marcia still posed great danger even though it had weakened to a category 3 system: "The eye of the storm is heading directly towards you."

Meteorologists said the worst of the winds should ease by Friday afternoon local time but warned heavy rains and flooding were likely to continue for several days and extend inland.

More than 10 percent of Australia's sugar crop is at risk from Marcia, an industry body warned. The world's No. 3 exporter of raw sugar is set to produce 4.6 million tonnes of the commodity in 2015.

Marcia's forecast trajectory indicated the impact on coal mining was expected to be less severe than in 2011, when Queensland missed its annual coal export target by 40 million tonnes after storms dumped unprecedented amounts of rain into coal pits.

Emergency services officials in the neighbouring Northern Territory were beginning to assess the damage caused by a second cyclone that hit the remote region earlier on Friday.

Cyclone Lam, a category 4 storm, made landfall in the early hours near the settlement of Ramingining, where residents were beginning to emerge to inspect the damage. Communications had been cut with tiny Elcho Island, which was believed to have experienced widespread damage, Northern Territory police said.

By midmorning Lam was downgraded to a category 2 storm but continued to dump heavy rain across Australia's north as it moved southwest.

It was also looming as a gloomy weekend for sports fans, with torrential rains from Marcia likely to force a halt to Australia's second World Cup cricket match against Bangladesh scheduled to be played in Brisbane on Saturday.

Not that everything's great. Our house was flooded by a blocked council drain back on the 8th Feb - we've been relocated to Yorkeys Knob in a 2 bedroom besser block shack (they call it a holiday home #lilygilded) with our 4 fur kids.

Once that's done the builders can start on ripping out the walls, floors, bathrooms and kitchen.

Thank you for telling us.

I don't know what to say that doesn't sound sucky.

report when you can. 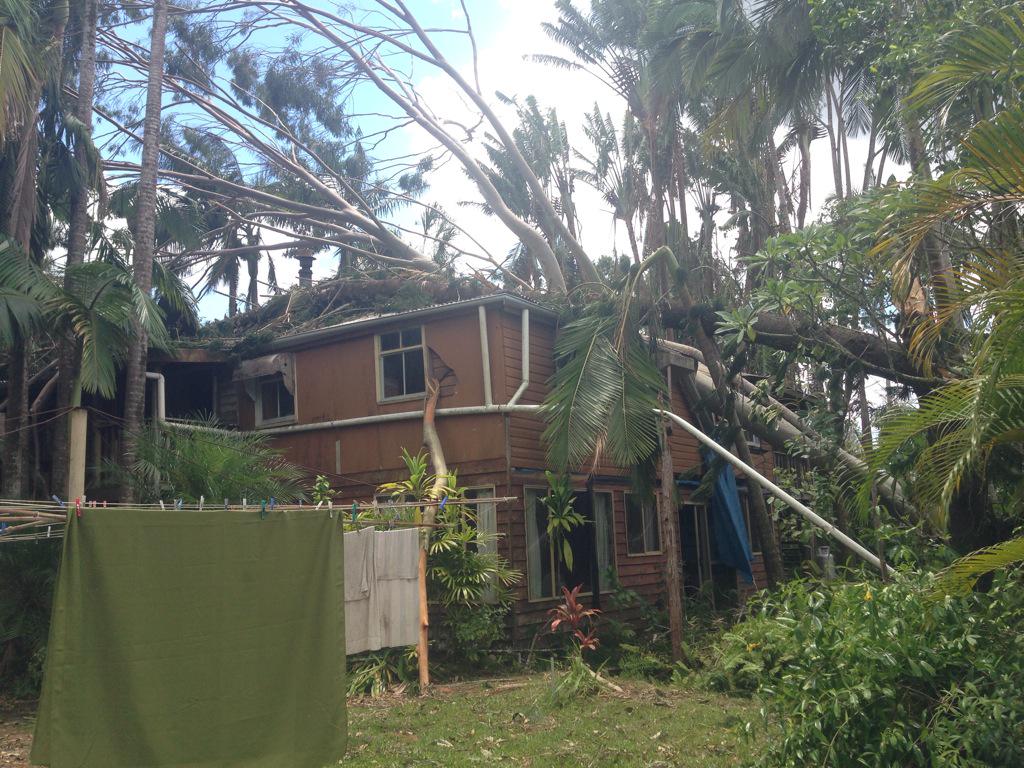 That said, cyclone season runs to April so we're not out of the woods yet.

We're on the northern tip of Estonia, Byfield in the Russia/Belarus/Ukraine tri-state area, and Ramingining (in the Northern Territory and also hit by cyclone) is in the middle of Sweden.
2 Replies
2
Reply Sun 22 Feb, 2015 09:09 pm
@hingehead,
yoiks

So I'll say hello from Krista, not joking.

Keep reporting.
0 Replies
2
Reply Sun 22 Feb, 2015 11:44 pm
@hingehead,
Good to see you posting. When I didn't see any activity from you on Facebook or here, I figured you were heading to higher ground and out of the high winds.

Soggy household belongings are not fun. Hope you have lots of help sorting through it all and that you will be able to rescue a good portion of it.
1 Reply
2
Reply Sun 22 Feb, 2015 11:46 pm
@Butrflynet,
That, and I hope he has real good insurance.
1 Reply
2
Reply Sun 22 Feb, 2015 11:59 pm
@roger,
We do indeed have good insurance but it's a nightmare of logistics. Insurance guys came within hours to do damage mitigation (i.e. get mud out of house and spray antimicrobial spray to keep the stink down)

But since then it's them figuring out what they can save by cleaning and what has to be replaced. 3 garbages skips filled and two rooms full of boxes to be taken to storage and we're only just getting to the electricals which have to be 'tagged and tested' by an electrician. Looks like they'll just throw it all out because they can't guarantee that it hasn't been affected and it's cheaper for them to replace an item than have us reopen a claim in 3 months when the tv stops working.

Anyway - once we're 'packed out' (all our surviving stuff in storage) the builders come in rip the gyprock out up to 1.35 meters and rip out the bathrooms, laundry, toilet and kitchen then lift all the tiles. Then they dry the house for several days at 45c and 20% humidity (until the concrete slab is less than 3% moisture. Then they do the microbial spray all over the timber frame to ensure no mould grows, then they grind the concrete slab to replace the tiles (although we are thinking about getting Sexy Floors throughout - but we'll have to make up the difference.

Then the walls and 'wet areas' are all redone and a couple of coats of paint. We think we have to live in a shoebox for 2 months before we can get back in.

When I have time I will tell of the exciting tale of finding calf deep water in your bed room at 2am on a Sunday morning.

We have the only latte swimming pool in the world. Garage flooded too and I've lost a few hundred vinyl LPs and singles. Mrs Hinge lost a bunch of photos. My job after work is to find replacement prices for so much electric equipment - some of it you can't really get any more - even though it's only a few years old, like a 7 port usb hub with audio pass through. No-one does audio pass through any more.