In Tully Heads, 21 properties had major damage, 19 had medium damage and 12 had minor damage, he said. The storm also inflicted major damage on about 70 boats in Port Hinchinbrook.

“I do want to stress, however, that this is aerial surveillance and until we get people on the ground making assessments property by property, they are preliminary assessments,” Mr Roberts told reporters early this afternoon.

“But I think that does give an indication that there is quite significant structural damage to properties, particularly in the area where the cyclone crossed the coast.”

He said authorities still had not been able to enter the communities of Silkwood, Halifax, Lucinda and Taylors Beach.

“As the day unfolds we will get people in there and get more of an impact,” he said.

Other communities were yet to be assessed from the air.

Mr Roberts said a second storm surge of half a metre above the highest tide level that had affected Cairns and Townsville had passed.

“That was in excess of what occurred in many of those communities last night,” he said.

However, there were still concerns about flash flooding from heavy rain in areas such as Ingham and Giru.

Residents in Cairns and Townsville who fled their homes before the cyclone have been given the green light to return.

Debris and fallen powerlines are causing growing traffic jams along the Bruce Highway as evacuated north Queenslanders attempt to get to their houses.

Cairns avoided the worst of the category-five storm overnight but there were fears about the storm surge on today’s 9.30am high tide.

Because of the surge, the city’s evacuation centres had been kept in lockdown, but thousands of people have now been given the okay to leave.

Authorities are still surveying the damage around Cairns and residents are urged to stay off the roads over the coming days to keep them clear for emergency services, police say.

0 Replies
5
Reply Wed 2 Feb, 2011 11:40 pm
Well all is well so far - I've been doing some chainsawing but now we're in the middle of an electrical storm so I can show you some pics.
A bit of the backyard mess 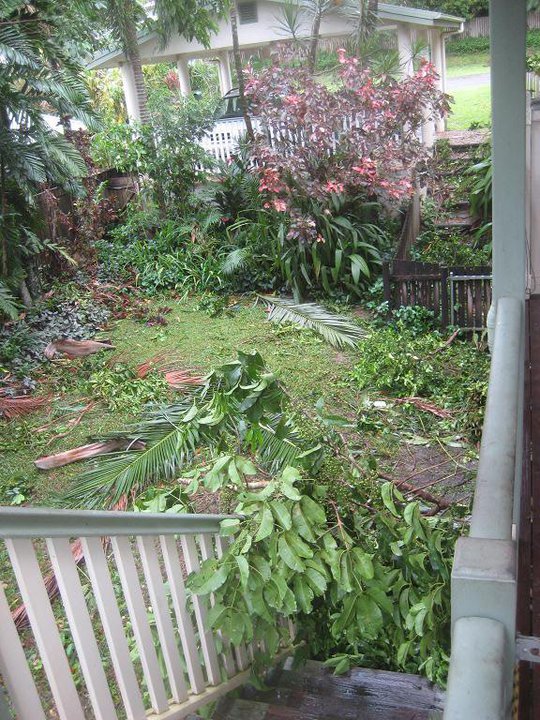 A large Hibiscus attacked our cars 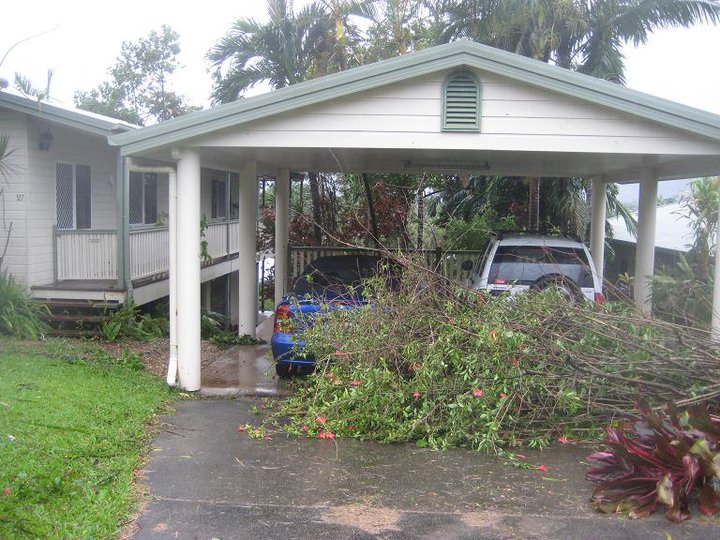 A few of our trees lost their tops - the broken end of this about a foot and a half from the glass sliding door of the granny flat - we don't even remember hearing it (unless it was one 'bang' when Mrs Hinge said 'Did you latch the gate?') 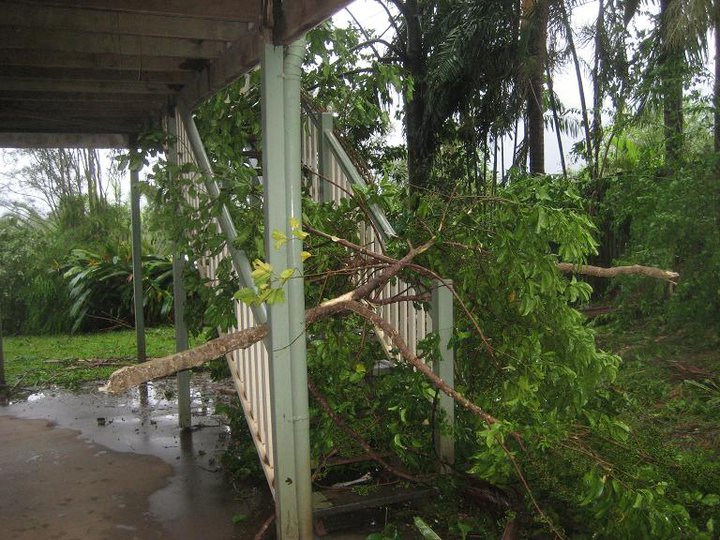 Sounds like Cairns got off a bit more lightly than anticipated, compared to other places. (Not that that made your experience any more scary, I'm sure.)

Looks like you have some yard tidying up to do. Is that it? Any damage to your house, or anything else? I like your yard & your home! Even in this state. (Ah Cairns! Loved the place!)

Tell us a little about your "bunkered" time. What was it like when Yasi came through?
How did your cats & dogs cope with the confinement? How are they now?
And you & Mrs Hinge?

I left my bedside radio on all night ... would wake up every now & then & hear a bit more of the travails people were experiencing. A very weird night's sleep.
It must have been quite strange for people , finally coming out when the coast was clear & there was enough light to see what your post-Yasi world looked like.

No damage to house - much better than Larry which covered it in a fine spray of mud. The 'bunker' made it easy, much quieter than being upstairs during Larry - we watched the cricket with the radio on and just wished it would be over so we could start cleaning up (or in Mrs Hinge's case: rebuilding)

Dogs and cats were majorly fine, the cats probably sensed something was up when the wind picked up around 10 but the dogs were oblivious, will post some pics later as proof.

We got off a lot lighter than Larry. No power loss (three days last time), less vegetation carnage, just. Very tired though - not much sleep last night.

All the neighbours seem fine too. Haven't gone for a drive yet, but I did see on Twitter that Cairns Central (the mall, if you will) will be open tomorrow, but Uni is closed until Monday (it was used as an evac centre - apparently a refugee family is camped under my desk).
3 Replies
1
Reply Thu 3 Feb, 2011 12:47 am
@hingehead,
Yes, do post more photographs, hinge! Would love to see them.

I'm so glad it wasn't much worse. (Though I heard on the news that Cairns hadn't lost power & hadn't experienced the anticipated damage ... )

I'm not surprised that your cats were onto something going on. They're so much smarter than dogs & people.

Yes, I heard about the shopping malls being used as "refugee" centres ... must have been quite an experience for the folk jammed into them. Imagine giving birth in a situation like that! Crikey.

So you have a few days off work & will have the time to clean everything up around your place? Good. Make sure you have a good rest, too. Not that I think you'll have much choice in the matter!

Phew, thank goodness it's over!


We still have power, Aus won the cricket, we may lose our roof but on the whole..... #tcyasi #cairns
5 hours ago 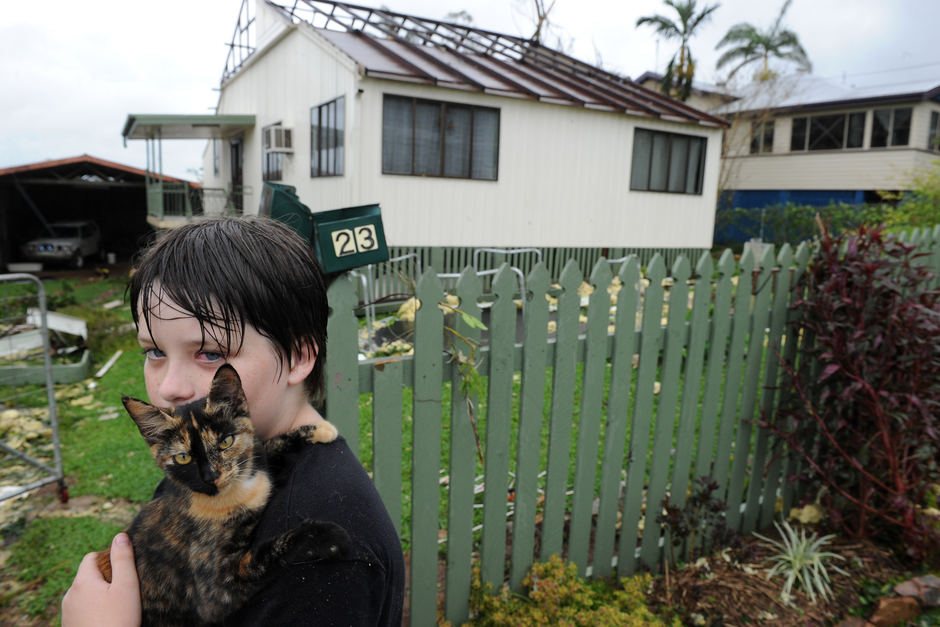 Nathan Long walks with his cat, Marbles, in Tully

It is not only humans affected by the wrath of Cyclone Yasi - animals suffer terribly in natural disasters.

Pets were not allowed in the cyclone evacuation centres, while farm animals were in paddocks when Yasi hit.

RSPCA spokesman Michael Beatty says there have been plenty of bird deaths as well as reports of animals wandering the streets.

"Our call centres have taken calls from people who have found animals in the street; unfortunately the way things are at the moment, there's no place for them to take in them in the short-term," he said.

"Certainly wildlife, particularly birds, appear to have been affected in the worst-hit areas."

But he says the RSPCA has not been able to reach the worst-hit areas yet.

"Our inspectors haven't been able to get through down to Tully, Mission Beach and that area because the roads are cut, so we don't know the full extent of it yet," he said.

"It appears that most of the animals in the Cairns area are fine, but the situation could be really different in the Mission Beach, Tully, Cardwell areas. As soon as the roads are open, we'll be down there."

Mr Beatty says the situation is made harder for owners because they cannot take their pets to evacuation centres.

"It's unfortunate that the evacuation centres didn't have separate areas for pets," he said.

"People had to leave them in the houses or give them to people who were in areas that weren't affected.

"So far, touch wood, it appears to have been pretty good. People did heed the warnings and tried to get their pets out."

Mr Beatty says natural disasters are a horrible time for our furry friends.

"All animals seem to sense natural disasters long before humans do," he said.

"Some dogs get absolutely petrified during thunderstorms, and obviously they're going to be petrified by the sound of the wind and the rain and the debris flying about. Pets get very anxious."

Most of the animals at the RSPCA shelters in Townsville and Cairns were flown out before Yasi hit, but now inspectors are working to help with any injured animals.

The roof and a pen at the Townsville shelter were damaged in the cyclone, but fortunately no animals were hurt.

"They're OK but there's been some damage so it will be at least a week before we can get the shelter operating again," he said.

"It's just really lucky Cairns didn't get hit as badly as everybody thought it would."

How are you all?

Very happy the Hinges are all safe and well.