Forums: Health
Email this Topic • Print this Page
Reply Fri 7 Sep, 2007 01:14 pm
i wonder why i was NOT invited to serve on the panel proving the health enhancing power of guinness ?
since we were talking about encouraging "preventive health measures" on another thread , i think it only right that the government supply a FREE pint a day ! 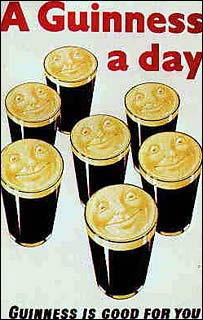 Guinness good for you - official
The old advertising slogan "Guinness is Good for You" may be true after all, according to researchers.
A pint of the black stuff a day may work as well as an aspirin to prevent heart clots that raise the risk of heart attacks.

Drinking lager does not yield the same benefits, experts from University of Wisconsin told a conference in the US.

Guinness were told to stop using the slogan decades ago - and the firm still makes no health claims for the drink.

The Wisconsin team tested the health-giving properties of stout against lager by giving it to dogs who had narrowed arteries similar to those in heart disease.

They found that those given the Guinness had reduced clotting activity in their blood, but not those given lager.

Clotting is important for patients who are at risk of a heart attack because they have hardened arteries.

A heart attack is triggered when a clot lodges in one of these arteries supplying the heart.

Many patients are prescribed low-dose aspirin as this cuts the ability of the blood to form these dangerous clots.

The researchers told a meeting of the American Heart Association in Orlando, Florida, that the most benefit they saw was from 24 fluid ounces of Guinness - just over a pint - taken at mealtimes.

We already know that most of the clotting effects are due to the alcohol itself, rather than any other ingredients
Spokesman, Brewing Research International

They believe that "antioxidant compounds" in the Guinness, similar to those found in certain fruits and vegetables, are responsible for the health benefits because they slow down the deposit of harmful cholesterol on the artery walls.
However, Diageo, the company that now manufactures Guinness, said: "We never make any medical claims for our drinks."

The company now runs advertisements that call for "responsible drinking".

A spokesman for Brewing Research International, which conducts research for the industry, said she would be "wary" of placing the health benefits of any alcohol brand above another.

She said: "We already know that most of the clotting effects are due to the alcohol itself, rather than any other ingredients.

"It is possible that there is an extra effect due to the antioxidants in Guinness - but I would like to see this research repeated."

She said that reviving the old adverts for Guinness might be problematic - at least in the EU.

Draft legislation could outlaw any health claims in adverts for alcohol in Europe, she said.

The original campaign in the 1920s stemmed from market research - when people told the company that they felt good after their pint, the slogan was born.

In England, post-operative patients used to be given Guinness, as were blood donors, because of its high iron content.

Pregnant women and nursing mothers were at one stage advised to drink Guinness - the present advice is against this.

The UK is still the largest market in the world for Guinness, although the drink does not feature in the UK's top ten beer brands according to the latest research.

experts from University of Wisconsin

.
perhaps BUD will come out with a brew with added antioxidants :wink:

personally , just spelling the word provides my brain with plenty of mental activity to last for the rest of the day :wink:
hbg

A spokesman for Brewing Research International, which conducts research for the industry, said she would be "wary" of placing the health benefits of any alcohol brand above another.

She said: "We already know that most of the clotting effects are due to the alcohol itself, rather than any other ingredients.

but I would like to see this research repeated." (AND SO WOULD I - perhaps i can be the guineapig :wink: )