What Do You Want On Your Pizza? 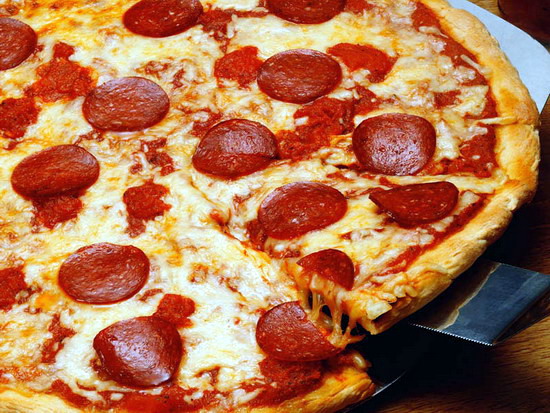 Whenever I got there, they'd already have ordered their favourite pizza - triple cheese, bacon and garlic. Not bad, but I'd rather have cheese, tomato and garlic. Love that garlic hiding in the middle of the smooshy, stringy, drippy cheese.
0 Replies
1
Reply Mon 4 Jun, 2007 06:41 pm
Aussie Supreme.

Would'ja believe that in Hawaii they'll actually put pineapple on your pizza?

Pizza topped with olive oil, fresh mozzarella, basil and tomatoes. None of that red sauce for me.
0 Replies
1
Reply Mon 4 Jun, 2007 11:11 pm
Heres my idea. Breakfast Pizza. Dont make a decision now, just think about it.
A pizza shell with an onion cilantro and egg omelette and cheese with bacon or links strewn with fried potatoes. A glassa fresh juice and a cuppa coffee on the side.
No tomatoes, just al blanca. Fresh ground pepper in big chunks , not this powder that some mills make.
0 Replies
1
Reply Mon 4 Jun, 2007 11:47 pm
I'm the original pizza snob.

It all had to do with my fourth pizza in Italy.

First, there was the one in the bowling alley caffe just outside of Firenze, not far from the gas station; we got this kind of shell like thing with mushrooms that attacked your face if you lifted the thing at too high an angle. This was the night we stayed in a estimable palazzo off season, and feared to check out the restaurant, because of our money concerns, and so took off, looking for a place to eat. Dumb on a Monday in early April, every place in town was Quiet. Thus the bowling alley...

Second, in campo dei Fiori, this thin crusted thing with ONLY some very thin sliced wurstel on it, the fatty parts dissolving in the oven, and us with some beer.

Third, the pizza vesuviana, at the place, well, if you want to know, I can find it. Something like Pizzeria Archetto. North of the Trevi.
That pizza was two thin discs, the top with a hole in the center, brought to the table by a near running waiter, steam wafting out of the hole, the whole thing in a certain cone form... Within, scrambled eggs, and I don't remember what else, but let's guess, pancetta and garlic and and and.

The fourth, at La Foccaccia, in front of the church,
santa maria della Pace.
Thin crust, good mozzarella, a tad of gorgonzola but not too much,
a few walnut halves.
I died and went to heaven and was revived by the chilled white wine.

I make my own pizza. Virtually always weird, hills and valleys of goodness.

OK, OK, I have some sense of guilt. That kitchen at the Villa might have stayed open for us, when we went out for that pizza that late night.

We just squeaked in there. (It had been listed in Am Express as a three star, which is why we ventured to inquire in the first place. So much more than that, geez, incredibly more.) It's in at least one of my ital garden books.

So, if the place is still going, I surely recommend it. Villa Viloresi, in Sesto Fiorentino, a Florence suburb.
0 Replies
1
Reply Tue 5 Jun, 2007 07:49 am
A couple of my west coast favorites.

Spicy chicken pizza with loads of dried ground peppers, fresh jalapenos, a little onion and of course some cheese!

Here in the midwest they bastardize foods that are not "from here" so I stick with classics like deep dish sausage and pepperoni. Even ordering a margherita here can be a challenge - "What flavor?" "Just plain". "Plain strawberry?". Argh. Also, many places, like Texas, use pickled in place of fresh. Pickled jalapenos are fine on nachos but they ruin a pizza.
0 Replies