Nutella/ It's Taking Over My Life

Forums: Nutella, Food And Drink, Snacks, Dessert, Cure For Pms
Email this Topic • Print this Page
Reply Sun 20 May, 2007 12:39 pm
For years, on Abuzz, and then A2K, I have been hearing of the wonders of Nutella. At first I had never heard of it. A few years ago, my supermarket started carrying huge jars of the stuff.

I once took a peek at the label, and it said something about ground hazelnuts. So I figured that Nutella was something like peanut butter, just made with another kind of nut.

But I kept my control, and left the jar on the shelf. In my heart I just knew that there was something devilish about that concoction.

Today was the beginning of the end. I was in a store, and saw a reasonably sized jar of Nutella. I figured, "What the hell, maybe I will give it a try", and I BOUGHT IT!

That little jar is sitting in my pantry, and I swear, I can hear it calling out to me. To throw it out would be absolute sacrilege, but to keep it there may be a portent of disaster.

On my good days, I can ignore my Nutella stash.

On my bad days, I use a spoon--only a teaspoon, mind and I cap the jar and put it away before I stuff my face.

Even unto the third and fourth helping I always use a clean teaspoon.
0 Replies
1
Reply Sun 20 May, 2007 02:31 pm
I used to eat Nutella with a teaspoon - frankly the only way to go -
but the American version tastes somewhat different and I weaned
myself off that one alltogether.

Yet, it's still the only cure for PMS.

HELP !
if i have any nightmares i'll blame you lot for it !
hbg 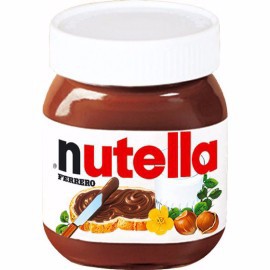 it is approved by "AKADEMIE DER KUENSTE" for surrealistic paintings

I have to stay clear of the whole AISLE where they carry nutella. I cannot just pass by and not buy it. When I buy it it's gone within two days (and that's WITH exercising exorbitant restraint). I think it should be illegal.
0 Replies
1
Reply Sun 20 May, 2007 04:05 pm
dag- Just think. If you ever wanted to get rid of somebody, you can just get him hooked on Nutella. Just keep feeding him the stuff, and his arteries would do the rest. It would be the perfect murder!

0 Replies
1
Reply Sun 20 May, 2007 05:57 pm
OMG I knew I shouldn't have gone near this thread- when I come across Nutella in the grocery store I run the other way. I discovered it in London a few years ago, and could not stop- I literally ate a jarful on baguette. If it was in front of me right now, I wouldn't stop until I'd licked it clean.


It will ALWAYS be banned from my home.


I know what would happen if I allowed it in.
0 Replies
1
Reply Sun 20 May, 2007 08:48 pm
Hazelnuts and chocolate are good for us now, in moderation of course.
It's the Haagen-Daz vanilla ice cream I fear..

http://www.westnut.com/info.htm
0 Replies
1
Reply Sun 20 May, 2007 08:59 pm
We have a Nutella problem in this house. Our kids eat Nutella sandwiches -- well, it's considered dessert, but still. I shouldn't tell you this, but we buy it at Sam's Club. Two gigantic jars are something like 7 dollars. It's obscene.
1 Reply