Forums: Art, Sculpture, Patricia Piccinini, We Are Family, Surrealism
Email this Topic • Print this Page
Reply Sat 28 Jun, 2003 09:40 am
I saw a picture of Patricia Piccinini's sculpture "The Young Family" in a NYT story about the Venice Biennale. 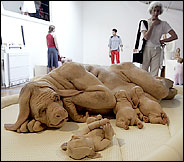 It really made an impression on me, and I have found more pictures and info:

What do you think?
Type: Discussion • Score: 0 • Views: 8,738 • Replies: 19
No top replies
1
Reply Sat 28 Jun, 2003 11:36 am
I looked at all of the pictures in the "We are family" exhibit with the sozlet, and her reaction was interesting. She really wanted to label them. This one was a big mama camel with baby camels. (??) The meerkat-types ("Leather landscape", I think) were monkeys. (Makes sense.) The "Still life with stem cells" stem cells were ducks.

Yeah, to all of those observations. What I liked, in no particular order...

- The archetypes of motherhood = beautiful, and babyhood = adorable, in the context of rather horrible beasts.

- Related, questions of what is beautiful, what is ugly, and why.

- Pure technique -- look at some of the closeups shown in my first link. Amazing detail -- veins, hairs, skin folds, everything.

- The labeling thing I mentioned with the sozlet (I thought that was really interesting).

(By the way she now just LOVES to look at this. She's asked to see the picture of the mama camel and the baby camels several times today.)
0 Replies
1
Reply Sun 29 Jun, 2003 01:41 am
I saw the biennale article too, and just about the only thing that pulled my interest was this picture you pulled up, with the humanoid doggie and pups, or perhaps I have it wrong.

"Surrogate (for the Northern Hairynosed Wombat)"

Check out the back detail:

And more in this exhibition:

I was poring over her stuff until I went out yesterday.

I'd love to get further thoughts from you.

I've only seen photos so far, would love to see something of hers in person.
1 Reply
1
Reply Sun 4 Apr, 2010 07:02 pm
@sozobe,
Well, it was HUGE! Not all that much taller than a real person, but the head and body and arms and hands and feet were enormous! The pain in the eyes was heart-breaking, and the fleshness without disguise or artifice was heart-breaking.

She's kind of based on the true story of a baboon mother whose baby died, and, in her grief, who stole an infant human and kept it for a while. The baby was unharmed.
This Mother is conceived as a kind of genetically engineered wet nurse...her buttocks and back look as though there has been vivisection...

There is something of the "mammy" in her...forced to raise babies not her own, while grieving for her own baby.

The details of the juxtaposition of the human infant in a disposable nappy, suckling from engineered "human" breasts, and the presence of the ordinary bags of baby stuff, against the Mother's nakedness and animal attributes was profound.


She's working in Australia so I hope I get to see more of her work.


There's a treasure trove of detailed photography of her work in one of the links I posted on my thread.


This is an actual photo I came across that looks to me like it could be one of Piccinini's sculptures (it's a sphynx cat):