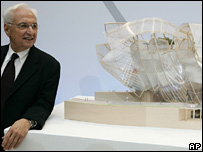 The 6,000 square metre space will be designed by Frank Gehry, the architect behind the Guggenheim Museum in Bilbao.

The building is still a 'plan' and needs the planning and building permission by the City of Paris.

It's thought that will happen until the end of this year, and the 100million-building would be built between 2007 and 2010.
0 Replies
1
Reply Mon 2 Oct, 2006 03:10 pm
For some reason I don't react negatively to this model - at this time - though I do have a concern with the way the wall at the bottom doesn't relate to the street, if it is a pedestrian accessway. But since I don't know the site, I may be way off on that.

I've had trouble not howling in laughter about the new building of his in Spain though; not the Guggenheim in Bilbao, which I like, but an Inn in Rioja (or a similar name).
0 Replies
1
Reply Mon 2 Oct, 2006 03:39 pm
The building will be made in "crumpled paper" style.
0 Replies
1
Reply Mon 2 Oct, 2006 05:22 pm
Nick, whatever the intellectual discourse that is out there about him, re deconstruction, I see him as all about materials and their uses. He did a lot of early work in Venice (my home town) and with his own house in Santa Monica, which is the next city north, making chain link fence fly in the air, wrapping his original house with another walled room, using plywood as a major component of his three houses on Nebraska Avenue in Venice... and has only carried on with more and more flights of material, into the realms possible with titanium. His first forays with titanium were not done with computer, though that is going on now. In the meantime, he's designed chairs out of corrugated cardbord...

Mostly I'm glad he's out there playing. He pushed the envelope of tolerable for the Santa Monica neighborhood with his own house, but I've always liked it, took lots of photos (filed away). Neighbors did complain. On the other hand, he is said to be building about six lots from my old house in Venice and have the neighborhood be ok with it (not sure that is still going on.) Well, we were quite a stalwart group open to architectual play, in my time there.

Occasionally I get aggravated, as with the Rioja building (I'll go get a link.)
Much depends on context for me. I'd like to see what this place in Paris would be next to.
0 Replies
1
Reply Mon 2 Oct, 2006 05:49 pm
The Marques de Riscal Hotel in Spain 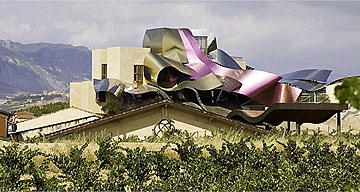 I seem to remember a more usual Spanish building next door, with a red tile roof, but can't find the photo.. maybe in an email from a friend.
0 Replies
1
Reply Mon 2 Oct, 2006 05:59 pm
Hmmm, too bad, I remember photos of how the structure of the hotel was worked out - but I see I ex'd the email.
0 Replies