Forums: North America
Email this Topic • Print this Page
Reply Sat 15 Jul, 2006 06:47 am
This sounds terrible!
Any further developments? (this report was hours ago, Oz time)
Any A2Kers affected?: 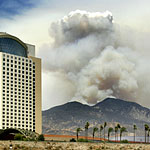 Inferno: The blaze has raged behind the Morongo Casino in the hills north of Cabazon, California. (Reuters)

Thousands of firefighters are battling a huge inferno in the southern California high desert, hours after two wildfires merged.

The California Department of Forestry and Fire Protection says the blaze is advancing on the Joshua Tree National Park, a wooded mountainous region, after roaring through nearly 69,000 acres and destroying hundreds of buildings.

"The two fires are together since [Friday] afternoon," department spokeswoman Kristel Johnson said.

"The smaller fire had burned 10,000 acres, mostly at higher elevations and is still 5 per cent contained."

The two vast fires east of Los Angeles have merged in the heart of the San Bernardino National Park, where acres of dry wood weakened by years of drought have provided a ready-made tinderbox.

Rough terrain, strong winds and high, dry heat have made it difficult for firefighters to battle the blazes. ... <cont>

Did you know that California & SE Australia share the unfortunate distinction of being the most wildfire prone areas on earth? (In Oz we call them "bushfires".) A feature of every summer here, it seems. Grim stuff!

I've never gotten used to it Amigo, even as a city slicker following the news bulletins ... the lost homes, sometimes the death of firefighters (mostly volunteers, here) & the poor bloody wildlife!

This is such a familiar sight:

Anyone who comes to Califronia stays at my house for free.


Just curious, Amigo. Are your firefighters mostly professionals or are many of them volunteers, like here? Fires being such common occurrence in your part of California. (As I recall, during last summer's bushfires in Victoria & New South Wales we had reinforcements from California flown in to help out. Big fires, that took ages to get under control.)
0 Replies
1
Reply Sun 16 Jul, 2006 05:43 am
Both, Also they have a prison program were if you qualify you can go too "fire camp" were instead of being in prison you get to live at a camp in the woods. Many ex-cons talk about all the positive things they learned at firecamp and how people would come up to them and hug them and tell them "thank you so much for your help" and a life they had never knew existed int the ghettos of the city.
0 Replies
1
Reply Sun 16 Jul, 2006 05:47 am
Fire camp. Hey, that's interesting, Amigo. I've never heard of a program like that before. That's great!
0 Replies
1
Reply Sun 16 Jul, 2006 05:55 am
Ain't it, and it's hard work so it is still a punishment and out there you might experience some real soul searching and introspection.

Stop panicking, Amigo!)
0 Replies
1
Reply Sun 16 Jul, 2006 06:05 am
I'm just kidding too. But the offer is open. I am also a traveler and have had lots of people stay at my house with no hidden motives except to extend things that have been extended to me.
0 Replies
1
Reply Sun 16 Jul, 2006 06:19 am
And fair enough, too!
0 Replies
1
Reply Sun 16 Jul, 2006 08:22 am
So much of California is subject to fires.. but then the fire was here before we were. Human populations and defense of them change, to some extent, the manner of fires happening - fires tend to burn to the edge of the last fire edge, or so I've read. My impression is that fires have gotten much bigger than they were before we all got to California - with fire not burning to it's natural edge and then the area between that defense line and the next burn getting larger. There are all sorts of complications, pros and cons, about the best way to deal with the natural fire ecology and human habitation. Add to this that we have "firebugs", arsonists who start a fair number of the fires. And we have trees that aren't native (oh, say, eucalyptus) that can to be explosive in fire girdling people's homes. And we have quandaries about clearcutting and clearing out underbrush going on.

When I lived in west Los Angeles in the early sixties, one of the fires on the west side came within six blocks of my family's house. By now there is a lot of information available about how to best build your abode, how to plant around it in zones to reduce fire fuel, what areas to water (water being a scarce substance), and what plants are resistant, or tend to be.
In many ways we live too heavily on the land when we should be living lighter and smarter. (soapbox)
0 Replies
1
Reply Sun 16 Jul, 2006 11:51 am
My son had a college friend with a hobby of volunteering for fire fighting. He hoped to help in every state in the West before he turned thirty.
0 Replies