I love how it kinda looks like a snowman.

We had so much fun tonight -- we went to what has to be one of the best Halloween events ever. And get this -- it was sponsored by the Mormon church. (Mo's best friend is Mormon and his mom is (becoming) one of my best girlfriends -- they live right across the street).

Anyway... They do this thing called "trunk or treat". They had the event at a park just a few blocks from the house -- a park known as the circle park to everyone around here. Everybody shows up, parks along the park's perimeter, opens their trunk and hands out candy. There were probably 75 cars and 200 kids.

It was an absolute blast. Other groups should mimic this type of thing. No joke.

Mo likes to hand out candy more than receive candy so he trunked it with me most of the time.

Mo's pal, Shep, was dressed as Blue from Blue's Clues but wearing Mo's extra Darth Vader mask -- making him Blue Vader I guess. I thought it was the best costume among hunderds of wonderful and creative costumes.

Next year Mo is going as Zorro the Cowboy or Crusty the Clown Robot or some kind of mix-up. Trust me. I can be persuasive. Sometimes.

What a knock down fun night.

That is interesting about the hands, littlek. I know I will be looking at Mo's sleeping hands a bit closer now.

"Snowman" was the theme, soz! We only did the one jack too - I had to work hellish hours last weekend and it mucked up my fun. Still, we'll probably carve our pumpkins up just for kicks. I'll post photos if we do.

"Convenient creativity"? Is there such a thing, Noddy?

"Convenient creativity"? Is there such a thing, Noddy?

Ummm. Maybe if you shred the crayons in the cheese grater and melt the colors into the coloring book through your magnifying glass.

My fully dressed KinderVader boy could have been any old boy in the world so the photos aren't much more fun than something to stick in his photo album.

But my disgust about buying a store bought coustume is abated. It turns out that a Darth Vader helmet makes a great interstellar transport for Thomas the Tank Engine and the train gang.

If I had known that the thing would have made such an adequate and interesting rocket I would have bought it ages ago. 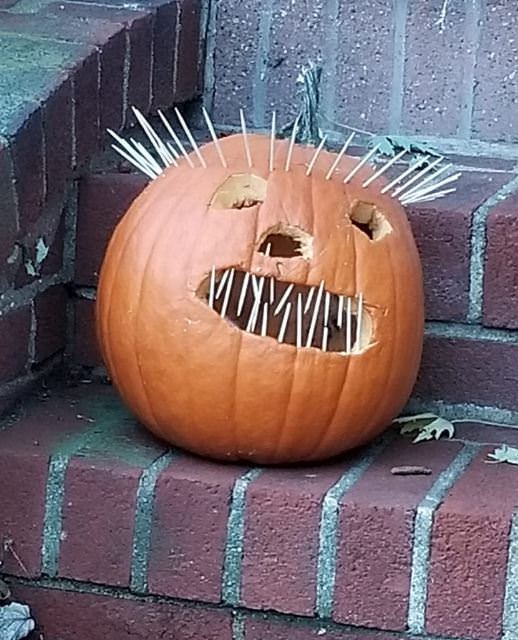 the resemblance is quite striking...
0 Replies