Unnatural homosexual union (think of the kids who see this)

Boston's beloved pair of swans -- feted by city leaders, residents, and tourists alike as one of the Hub's most celebrated summer attractions -- are a same-sex couple. Yes, scientific tests have shown that the pair, named Romeo and Juliet, are really Juliet and Juliet.

The city's Parks and Recreation Department conducted the tests months ago, but didn't announce the results for fear of destroying the image of a Shakespearean love story unfolding each year in the Public Garden.

''Each year when the swans go in, the kids immediately come to us and say, 'Which one's Romeo, and which one's Juliet?' " parks spokeswoman Mary Hines said yesterday in response to a Globe inquiry. ''It's just like one of those fairy tales; why spoil it?"

This year and last, the swans have laid eggs in the spring and then stood guard at the nest as visitors and nearby residents made regular pilgrimages, hoping to see the eggs hatch. Neither batch did. Turns out, that's because they were never fertilized by a male swan.

The news ignited something of a debate among swan spectators in the Public Garden yesterday, with some insisting the city now should buy a true Romeo and others saying the city should embrace the two as a couple.

''If these two swans are happy together, they shouldn't have to have a guy," said Emma Stokien, a 15-year-old from New York. ''It's good to have the swans as a symbol of the acceptance in Massachusetts." 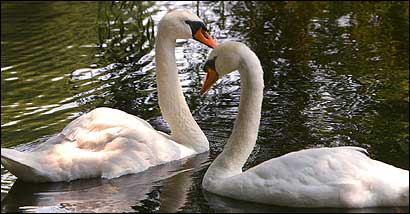 Swans will pair up with members of the same sex if there are no opposite-sex mates available, and one will act out the role of the opposite gender. They tend to stay with the same mates until death, typically between age 20 and 30.

oh god, and what about those, I can't remember what they're called Bonono Monkeys?

It's like a group grope.
0 Replies
1
Reply Fri 12 Aug, 2005 02:49 pm
Technically speaking, as the gender is known, what you have there are a pair of pens. To fertilize eggs, they would need to introduce a cob--but if these pens truly are lesbian pens, then the cob would be rather useless. However, if they showed any interest, upon hatching a brood, they would have produced cygnets.
0 Replies
1
Reply Fri 12 Aug, 2005 03:03 pm
ebrown_p wrote:

Here is the picture (please don't let any young kids see this.