Is your personal beliefs or privacy worth losing your job over?

Forums:
Email this Topic • Print this Page
-2
Reply Wed 13 Oct, 2021 08:42 pm
There is a sane middle ground. Covid is serious and yes 700,000 have died. However even at its worst, covid was not the largest cause of death (it was number 3 behind heart disease and cancer).

Can anyone here admit the costs of draconian policies. Most people who aren't vaccinated are from minority communities. Have you considered tge increases social cost of preventing people from already distressed communities from working?

A sane policy balances costs with benefits. Draconian measures that threaten people with ruin often cause more problems than the solve.

2 Replies
-1
Reply Wed 13 Oct, 2021 09:04 pm
@maxdancona,
The arguments being made on this thread are not sane. They are hysterical and emotional and angry. But they aren't logical.

A rational discussion on vaccine mandates will ask to things

1) What are the benefits of preventing people with vaccines from working? This has nothing to do with how many people have died, or the civil war, or smallpox..There two options, voluntary vaccinations or mandated vaccines. The difference in lives lost may not be very much between the two.

And all she had to do was where her mask, or act like and adult and leave.

Please explain to me how a 16-year-old who just wants to get the public education that her parents are paying for with their tax dollars, is an "adult" according to you.

What are the costs of preventing unvaccinated people from working? Will this hurt communities of color?

This post implies that there is significant similarity between smallpox and covid. This argument has zero basis in reality or fact.

My point is that there is a balance to be made. If a disease is serious enough, I would support deastic measures that take away civil rights. Innthe case of covid (especially as the pandemic is waning), we aren't anywhere close to this point.


LOL so 700 thousand deaths and counting is not serious enough and that is not even counting people who end up with long terms problems. Hell due to this disease for the first time in our history at least since record had been keep the average lifespan had decrease or so I had read.

COVID-19 has generated a huge mortality toll in the United States, with a disproportionate number of deaths occurring among the Black and Latino populations. Measures of life expectancy quantify these disparities in an easily interpretable way. We project that COVID-19 will reduce US life expectancy in 2020 by 1.13 y. Estimated reductions for the Black and Latino populations are 3 to 4 times that for Whites. Consequently, COVID-19 is expected to reverse over 10 y of progress made in closing the Black−White gap in life expectancy and reduce the previous Latino mortality advantage by over 70%. Some reduction in life expectancy may persist beyond 2020 because of continued COVID-19 mortality and long-term health, social, and economic impacts of the pandemic.

0 Replies
0
Reply Wed 13 Oct, 2021 10:40 pm
@maxdancona,
Just for the fun of it what is your opinion what should be the number of deaths before we mandate shots?

A report by the Odessa Accountability Project of Texas claims that a 17-year-old patient thought to be unvaccinated was humiliated by Hospital staff who placed a plastic bag over her head after she removed her face mask. 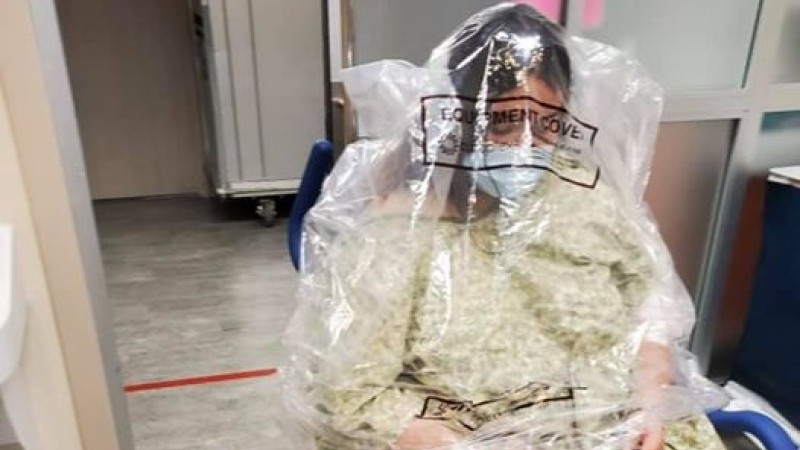 A photo of the teenager posted to the group’s Facebook page shows the young woman with the bag, which features the words “equipment cover,” placed over her head and upper body. She is also wearing a face mask in the photo. You don’t need to be a doctor to know the dangers of putting plastic bags over people’s heads, especially if they are already suffering from breathing difficulties.


The young woman was “humiliated and dehumanized by the staff” for apparently removing her face mask. “The girl’s mother said she complained of not being able to breath well, taking off the mask, and was asked to put it back on,” states the post.

“The bag was over her head for roughly 30 minutes and she was instructed to save the bag for future use throughout the hospital.” Respondents to the post reacted with horror.

“If that was my child, or grandchild, I’d walk her out of that hospital after telling them where to put that bag,” remarked one. "I can’t believe they did this to her,” said another.

“I don’t believe in most medical lawsuits but in this case I would definitely be talking to an attorney,” commented another.


This is unlikely to be an isolated incident, a unvaccinated people are looked upon as second-class citizens in this 'brave new world'

https://www.visionnews.online/post/treatment-of-unvaccinated-girl-dehumanising-as-medical-staff-put-plastic-bag-over-her-head
1 Reply
0
Reply Thu 14 Oct, 2021 02:05 am
@BillRM,
Max seems to be of the opinion that being slightly to the left of Mot makes him centrist.

It doesn't , it makes him the same as Hitler.

Some things have no middle ground like public health or the
Final Solution.
0 Replies
2
Reply Thu 14 Oct, 2021 03:04 am
@ManOfTruth,
ManOfTruth wrote:

Right... And please do tell, what are your doctorate credentials in exactly?

Are you saying at those 700,000+ deaths all happened since Jan of 2021? What about those who died last year? Why do people like to blame the current president for everything when this pandemic started more than a year ago under the past president?
1 Reply
2
Reply Thu 14 Oct, 2021 05:34 am
@maxdancona,
Take note that some patients in some states are finding it very hard to get the care they needed from cancer and heart attacks and car wrecks due to the hospitals being full up by anti vacciners.

Just for the fun of it what is your opinion what should be the number of deaths before we mandate shots?


We are talking about vaccine mandates. And, we are trying to do the most good and the least harm.

You are asking the wrong question. The number of deaths that have already happened is irrelevant to the question (unless the vaccine is able to raise people from the dead). There are two relevant questions.

1) How many lives will be saved by a vaccine mandate? The facts that most people are choosing to be vaccinated voluntarily and that deaths are already falling rapidly without vaccine mandates are relevant.

2) What are the social and economic costs of a vaccine mandate? A mandate viilates a persons privacy, and is forcing people to get a medical procedure against their will. These issues are amplified in minority communities, some people see a connection to Tuskegee and understandably suspect forced public health.

Take note that some patients in some states are finding it very hard to get the care they needed from cancer and heart attacks and car wrecks due to the hospitals being full up by anti vacciners.


I was just listening to this on NPR this morning. I was surprised by the number of cases reported although some of those might be cases where there was no harm from the delay. The idea that "well, we'll just put you on chemical treatment for breast cancer to hold it in check until we can do surgery" was kind of shocking.

With hospitals crowded from COVID, 1 in 5 American families delays health care
2 Replies
0
Reply Thu 14 Oct, 2021 08:03 am
@engineer,
This cherry picking of data is kind of silly. People searching for reasons to exaggerate what is actually happening.

In normal times, ICUs are designed to run at 70-80% capacity. Right now, nationn wide, ICU capacity is at 75%. This is normal, but is being reported as a high numer.

Engineer's statistic that 20% people report having delayed health care due to covid is also not that scary. I am one of those people, and it is because of completely reasonable social distancing measures in hospitals more than a lack of beds.

The fact is that there are open hospital beds in the great majority of hospitals (with few exceptions).

Covid is clearly impacting the health care system. I have no problem accepting these facts. But the facts dont support this sense of hysterical panicked outrage coming from the political left.
0 Replies
2
Reply Thu 14 Oct, 2021 08:24 am
@ManOfTruth,
Quote:

“I don’t believe in most medical lawsuits but in this case I would definitely be talking to an attorney . . .

Health care workers bullying and assaulting a teenager. It's on camera, so yeah, they're going to be charged with endangering the health of a teenager.
0 Replies
1
Reply Thu 14 Oct, 2021 08:25 am
@maxdancona,
Quote:

These issues are amplified in minority communities, some people see a connection to Tuskegee and understandably suspect forced public health.


That misconception has been debunked many times from numerous sources. Here's one:

(...) “It's ‘Oh, Tuskegee, Tuskegee, Tuskegee,’ and it's mentioned every single time,” says Karen Lincoln, a professor of social work at the University of Southern California. “We make these assumptions that it's Tuskegee. We don't ask people.”

When she asks the Black seniors she works with in Los Angeles about the vaccine, Tuskegee rarely comes up. People in the community are more interested in talking about contemporary racism and barriers to health care, she says, while it seems to be mainly academics and officials who are preoccupied with the history of Tuskegee.

“It's a scapegoat,” Lincoln says. “It’s an excuse. If you continue to use it as a way of explaining why many African Americans are hesitant, it almost absolves you of having to learn more, do more, involve other people – admit that racism is actually a thing today.” (...)

The key to addressing this mistrust requires a paradigm shift, says Warren of Tuskegee University. If you want Black people to trust doctors and trust the vaccine, don’t blame them for distrusting it, he says. The obligation is on health institutions to first show they are trustworthy: to listen, take responsibility, show accountability and stop making excuses. That, he adds, means providing information about the vaccine without being paternalistic and making it easier to access in Black communities.

kqed
1 Reply
1
Reply Thu 14 Oct, 2021 08:38 am
@hightor,
I agree with this article. Many African Americans are hesitant to get the vaccine. This article is not in support of a vaccine mandate to force minority communities into compliance. It is proting effoets by the public health sector to build trust.

I support this.
0 Replies