Forums: Politics, Ronald Reagan
Email this Topic • Print this Page
Reply Sat 28 Aug, 2021 09:04 am
My brother revered Reagan. He kept a handsomely framed photo of him in a prominent spot on the wall from the 70s until he died. I felt a fondness for the man, initially. I had watched him be always the good guy in movies and saw him in person speechifying for Goldwater. I even smiled along with many others when he pursed his lips and said, "There you go again." The single act that got him elected. After all I had experienced from people like him throughout the 60s I let my guard down and voted for him. By the time he left office I was a Reagan hater and had vowed never again to vote for a Republican. This thread is dedicated to taking a close look at his life, particularly as president.
Type: Discussion • Score: 5 • Views: 397 • Replies: 18
No top replies
1
Reply Sat 28 Aug, 2021 11:04 am
Wikipedia has much to say about him. Here is a portion of their article.

Ronald Wilson Reagan (/ˈreɪɡən/ RAY-gən; February 6, 1911 – June 5, 2004) was an American politician who served as the 40th president of the United States from 1981 to 1989 and became a highly influential voice of modern conservatism. Prior to his presidency, he was a Hollywood movie actor and union leader before serving as the 33rd governor of California from 1967 to 1975.

Raised in a low-income family in small towns of northern Illinois, Reagan graduated from Eureka College in 1932 and worked as a radio sports commentator. After moving to California in 1937, he found work as an actor and starred in a few major productions. As president of the Screen Actors Guild, Reagan worked to root out alleged communist influence. In the 1950s, he moved into television and was a motivational speaker at General Electric factories. In 1964, his speech "A Time for Choosing" earned him national attention as a new conservative spokesman. Building a network of supporters, Reagan was elected governor of California in 1966. As governor, he raised taxes, turned a state budget deficit to a surplus, challenged the protesters at UC Berkeley, and ordered in National Guard troops during a period of protest movements.

In 1980, Reagan won the Republican presidential nomination and defeated the incumbent president, Jimmy Carter. At 69 years, 349 days of age at the time of his first inauguration, Reagan was the oldest person to assume the U.S. presidency, a distinction he held until 2017, when Donald Trump was inaugurated at age 70 years, 220 days. Reagan faced former vice president Walter Mondale when he ran for re-election in 1984 and defeated him, winning the most electoral votes of any U.S. president, 525, or 97.6% of the 538 votes in the Electoral College. It was the second-most lopsided presidential election in modern U.S. history after Franklin D. Roosevelt's 1936 victory over Alf Landon, in which he won 98.5%, or 523, of the (then-total) 531 electoral votes.[5]

Soon after taking office as president, Reagan began implementing sweeping new political and economic initiatives. His supply-side economic policies, dubbed "Reaganomics", advocated tax rate reduction to spur economic growth, economic deregulation, and reduction in government spending. In his first term, he survived an assassination attempt, spurred the War on Drugs, invaded Grenada, and fought public sector labor unions. Over his two terms, the economy saw a reduction of inflation from 12.5% to 4.4% and an average real GDP annual growth of 3.6%. Reagan enacted cuts in domestic discretionary spending, cut taxes, and increased military spending, which contributed to increased federal debt overall. Foreign affairs dominated his second term, including the bombing of Libya, the Iran–Iraq War, the Iran–Contra affair, and the ongoing Cold War. In June 1987, four years after he publicly described the Soviet Union as an "evil empire", Reagan challenged Soviet General Secretary Mikhail Gorbachev to "tear down this wall!", during a speech at the Brandenburg Gate. He transitioned Cold War policy from détente to rollback by escalating an arms race with the USSR while engaging in talks with Gorbachev. The talks culminated in the INF Treaty, which shrank both countries' nuclear arsenals. Reagan began his presidency during the decline of the Soviet Union, which ultimately collapsed nearly three years after he left office.

When Reagan left office in 1989, he held an approval rating of 68%, matching those of Franklin D. Roosevelt, and later Bill Clinton, as the highest ratings for departing presidents in the modern era.[6] He was the first president since Dwight D. Eisenhower to serve two full terms, after the five prior presidents did not. Although he had planned an active post-presidency, Reagan disclosed in November 1994 that he had been diagnosed with Alzheimer's disease earlier that year. Afterward, his informal public appearances became more infrequent as the disease progressed. He died at home on June 5, 2004. His tenure constituted a realignment toward conservative policies in the United States, and he is an icon among conservatives. Evaluations of his presidency among historians and the general public place him among the upper tier of American presidents.
0 Replies
1
Reply Sat 28 Aug, 2021 11:27 am
His approval rating mostly had to do with his image manipulation and perception, not his performance. After he has shot, he took on a heroic glow. When he said “Honey, I forgot to duck”.

My objections have to do with the following reasons:

1. Was at the beginning of the sanctimonious religious right “Silent Majority, which was neither.
2. Fired air traffic controllers and did his best to bust unions. The economic tax burden was so damaging that the poor and middle-class gave way to the rich. At that time one of the greatest transfers of wealth this country had seen in its history.
3. Allowed Ollie North Carter’s Blanche to be a loose cannon and funnel money to Ayatollah Khomeini.
4. He was not a good manager, to say the least. And, by the time he left office, he was going senile. Allowed his wife to be an unofficial cabinet member.
0 Replies
1
Reply Sat 28 Aug, 2021 12:32 pm
@edgarblythe,
I, too, was taken in, Edgar.

I voted for him...and regretted that vote almost immediately. The moment I heard him (in his first Inaugural Address) say, "Government is not the solution to our problem, government is the problem"...I knew I had screwed up.

Anyway...we live and we learn.

I'll give him this: He was almost always upbeat...and had a smile on his face most of the time. Those are good qualities to have for any human.

Other than that...he was a net negative for America, not a positive.
0 Replies
1
Reply Sat 28 Aug, 2021 03:06 pm
His (and his administration's) squeamishness about gay people caused us to squander multiple opportunities to act on AIDS.

I'm not saying everything would have been awesome, but putting $ into condom PSAs in particular could have saved lives.
0 Replies
1
Reply Sun 29 Aug, 2021 07:19 am
Reagan had a coating of Teflon that even his most egregious screwups couldn't wear away. They had enough on him to impeach over Iran/Contra but feared to act against the Teflon. He put troops in a barracks in Lebanon with no protection that I could detect by reading news accounts. I fretted every day because to me it was obvious they were sitting ducks. When the explosion came and about three hundred of them died I read no criticism of the president. He moved out the living and all was forgiven and forgotten. Even today nobody brings up the incident. I wrote a letter to the editor of my local paper criticizing "these military geniuses" but they didn't print it.
1 Reply
1
Reply Sun 29 Aug, 2021 07:24 am
The U.S. peacekeeping force occupied an exposed area near the airport, but for political reasons the marine commander had not been allowed to maintain a completely secure perimeter before the attack. In a national address on October 23, President Reagan vowed to keep the marines in Lebanon, but just four months later he announced the end of the American role in the peacekeeping force. On February 26, 1984, the main force of marines left Lebanon, leaving just a small contingent to guard the U.S. embassy in Beirut.
https://www.history.com/this-day-in-history/beirut-barracks-blown-up
0 Replies
0
Reply Sun 29 Aug, 2021 07:55 am
@edgarblythe,
I never liked him, I thought he was a warmonger and I was very worried when he got in. I honestly thought there would be a nuclear war.
1 Reply
1
Reply Sun 29 Aug, 2021 08:42 am
@izzythepush,
Quote:

I honestly thought there would be a nuclear war.

a lot of us did too.

in the summer of '81 i was sixteen and freaking out, thinking the world was coming to an end.

It was a double whammy, we’d already got the Thatch in power and then that.


That was a one/two punch to the gut for humanity, Izzy.

1 Reply
0
Reply Sun 29 Aug, 2021 09:32 am
@Frank Apisa,
I can’t post links, and I have posted it on A2K before, but there is a really good parody of the Gone With The Wind cinema poster with Reagan and Thatcher.

I can’t post links, and I have posted it on A2K before, but there is a really good parody of the Gone With The Wind cinema poster with Reagan and Thatcher. 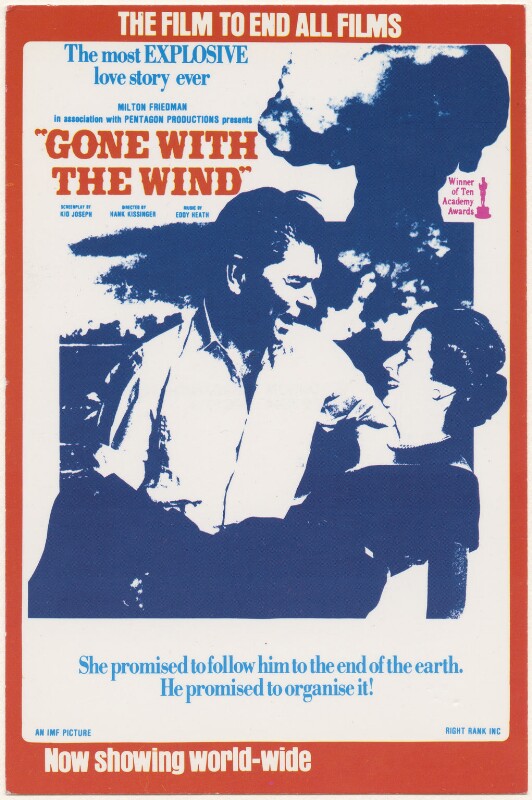 They had enough on him to impeach over Iran/Contra but feared to act against the Teflon.

The Democrats have proven that they will impeach people over nothing at all, so they technically could have impeached him.

I honestly thought there would be a nuclear war.

a lot of us did too.
in the summer of '81 i was sixteen and freaking out, thinking the world was coming to an end.
(turns out i had an advanced case of strep throat, which clouded my thinking...)

Actually there nearly was a nuclear war. We came a lot closer than most people realize. But it would be silly to blame Mr. Reagan for it.

When the US conducted the Able Archer '83 exercises, the Soviets thought it was the prelude to a US nuclear strike, panicked, and brought their alert level all the way to DEFCON 1 (or whatever their equivalent to DEFCON 1 was).

The US general in charge of our nuclear alert levels saw no reason for tension, figured it was some internal Soviet matter, and didn't want to ruin people's plans unnecessarily by suddenly putting them on maximum alert, so he ignored the Soviets and did not raise our own alert level.

Had he reciprocated by raising the US alert level, the Soviets would have figured that it was the beginning of the attack that they believed was about to come, and it is likely that they would have launched their nukes.

Instead the Soviet government huddled all night on the outskirts of Moscow waiting for our nukes to rain down on them, and when the next morning came and we had not attacked them, and they were stunned when they realized how close they had come to an accidental nuclear war.

Later the Reagan Administration was equally as stunned when our spies revealed how close we had come to nuclear war, and how it had only been avoided by a general who had no idea the stakes of the decision he was making.

That ultimately put the fear of God into both sides and got them to tone down the tensions a bit. It was after this that they stated taking peace talks seriously and negotiating disarmament treaties.

Coincidentally the nuclear war, had it happened, would have been just a couple weeks before the airing of The Day After on TV.

In the years that followed, replacing striking workers became a commonplace practice in the private sector, union membership declined to historic lows, the wealth and power of the 1% exploded while real wages for most workers have remained stagnant, despite workers in the US being more productive than ever. The breaking of the PATCO strike was an event that played an outsized role in shaping the world we are living in today—a world in which a once-strong labor movement had its back broken, leaving working people to be systematically stripped of their individual will to exercise their rights in the workplace and their collective ability to protect themselves from being crushed into subservience by the profit-seeking prerogatives of the business class.
https://therealnews.com/we-are-living-in-the-hell-ronald-reagan-made
0 Replies