How come there has never been a month-long observance for Christians?

Mardi Gras season begins on Epiphany, a Christian holiday celebrated on January 6 that is otherwise known as Three Kings Day or the Twelfth Day of Christmas. This period between Epiphany and Fat Tuesday is known as Carnival. Whichever name you prefer to use, the revelries of Mardi Gras last until Ash Wednesday ushers in 40 days of Lent.

Don't get me started on Catholics. Roman Catholicism is a CULT.


Sometimes I forget what a complete nut-case you are, JG. I forget just how full of **** you are.

Thank you for the occasional reminders.
1 Reply
2
Mon 8 Mar, 2021 07:02 am
@JGoldman10,
According to a few online searches, Moore generally preaches about prosperity gospel, which is the belief that donating to the church will lead to receiving blessings both material and spiritual.
https://www.heraldtribune.com/article/LK/20111128/News/605225077/SH

I have never liked that particular theology because certain pastors have abused it to get money from their followers. That theology also runs the risk of pushing people away from Christianity if their donations to the church fail to improve their own lives.
0 Replies
0
Mon 8 Mar, 2021 08:02 am
@bulmabriefs144,
Quote:

"White American" Christianity, as you put it, is no different from Protestantism in Europe.

Of course it is. Protestants in Europe.

White American Christianity is based on "America First"... an idea that is foreign to the Bible, and to Christians in any other country.

Trump voters range from:
1. Former liberals who had their own party push them too far.
2. Small business owners who have been scraping by for years having laws like Obamacare, with its huge penalty for not being insured shoved down their throats (btw, being forced to close their businesses because of COVID or because having a pipeline wasn't eco-friendly or whatever the hell excuse Biden used, doesn't endear the them to Biden either).
3. Black voters who actually saw things turn worse for race under Obama, and better under "racist" Trump.
4. Women who got tired of being competed with for femininity by trans types.
5. Legal immigrants that saw illegal ones "jumping the line" and getting benefits for sneaking in. That's right, the most "racist" against Hispanics are actually those who came there lawfully.
6. People in general who were tired of this crap.

I'm no longer one of them, because I've come to realize that an ideal government in this world is the way of the Antichrist, and voting, by definition, creates social divide. I saw how the more Trump failed to get the punishment they wanted for him, the more unhinged the left became. Almost as though, this is a seesaw effect.
But you should know that how CNN portrays Trump voters as a sort of while male Christian cult is wrong. 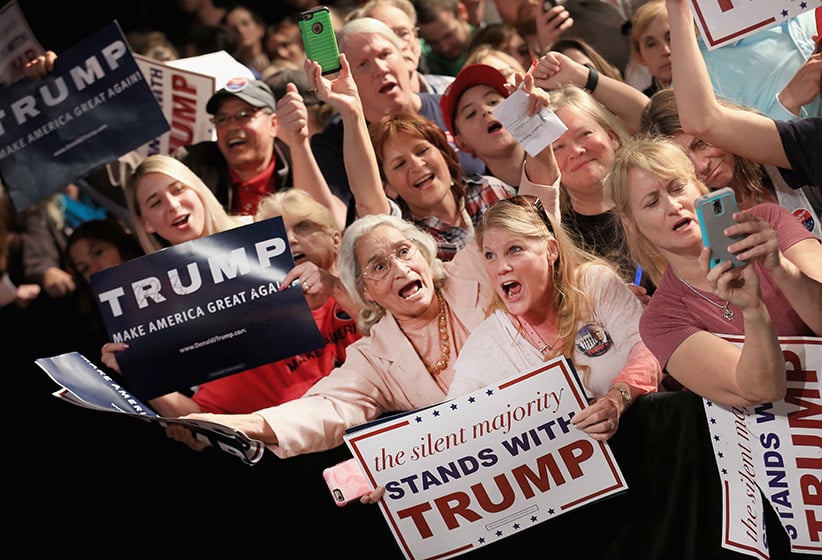 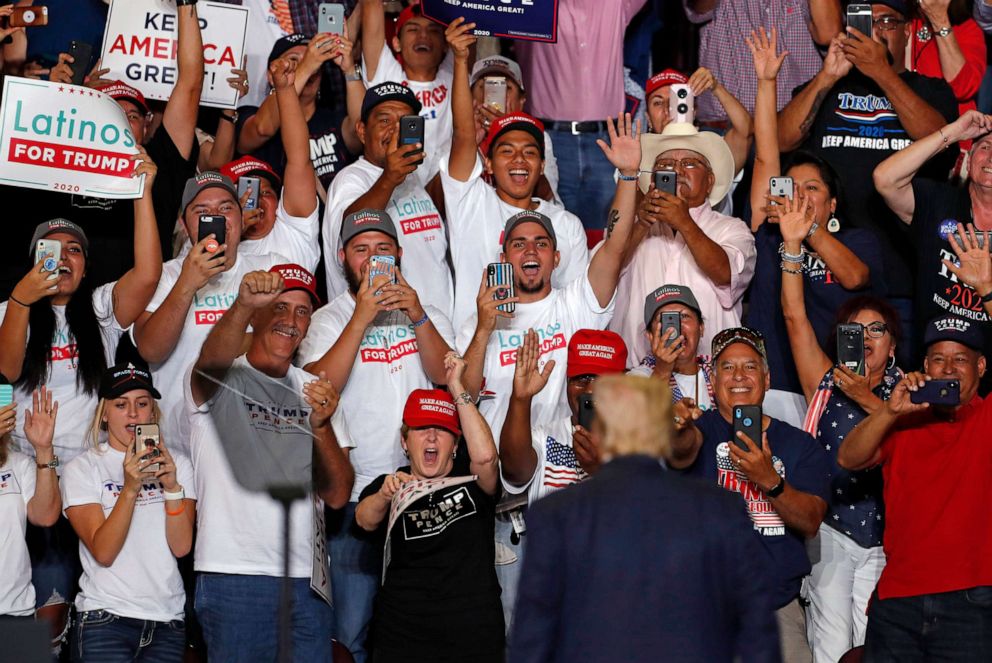 As you can see, chunks of Hispanic, black, and female voters voted for the guy.

There are actually people who didn't vote for Trump at all, they voted to protest leftist extremism. They voted against Hillary and Biden. That's people like me.

This stuff, btw, is not called religion. It's called nationalism. And it's something Europe ran out of, when they all got trashed by World War II and then subjugated by the EU. When your country is told they can't even fish their own harbors without bureaucratic red tape, you're not in the mood to be patriotic.

The most racist group in terms of denying undocumented (as you put it) immigrants are actually the Hispanics.

2 Replies
1
Mon 8 Mar, 2021 09:11 am
@bulmabriefs144,
We aren't talking about Trump voters. We are talking about how White American Christians are different (and opposed to) other types of Christian.

White American Christianity is its own religion.
1 Reply
-1
Mon 8 Mar, 2021 09:22 am
@maxdancona,
You're talking about the "religion" that's not actually part of religion at all.

This is simply the American right. Their religion is no different from any other Protestants. I know this, because I've gone to both liveral and conservative churches over the years. All but the most messed up churches, they leave politics at the doorstep, and they talk about Jesus.

While it is tempting to see political idealism as part of religion, the leftist Christians (dude, seriously, goto a Unitarian church, you'll probably change your mind about this "all Christians are anti-immigrants" thing, though they tend to the exact ppl to bring politics into a sermon) are also guilty of political idealism. What, you don't think Nancy Pelosi's and AOC's attempts to remake this country are because of seeing some perfect America that gives them what they want? But this is not religion. This is not what they do the one day of the week they are supposed to sit down and pray.
1 Reply
-1
Mon 8 Mar, 2021 09:50 am
@bulmabriefs144,
If the leader of a church told the people in his congregation that they should sell their belongings to give their money to people in need. Or if a pastor told people not to defend themselves from criminals.

Would this church leader be out of line?

The more you talk about what you believe the less it sounds like Christianity, perhaps you should call it something else.
3 Replies
2
Mon 8 Mar, 2021 02:14 pm
@izzythepush,
izzythepush wrote:

You are a complete idiot. The lion the witch and the wardrobe is a retelling of the crucifixion. It’s as Christian as you can get.

The more you talk about what you believe the less it sounds like Christianity, perhaps you should call it something else.


I don't think JGoldman understands metaphors and even similes. Those concepts would be blasphemous to his literal Bible-thumping worldview.
0 Replies
3
Mon 8 Mar, 2021 02:16 pm
@izzythepush,
JG talked about this before. He does not like the depiction of any and all kinds of witchcraft, even if it is shown in a negative way.

Of course, JG apparently belongs to a very conservative Christian church, so that is not unexpected.
2 Replies
1
Mon 8 Mar, 2021 02:33 pm
@Rebelofnj,
I think I might have mentioned Planet Narnia about the third meaning in the books.

JG talked about this before. He does not like the depiction of any and all kinds of witchcraft, even if it is shown in a negative way.

Probably not. Regardless of their faith, they would have been killed by the government and forced to relocate to the West.


So there's no place in the world Native Americans could have gone to take refuge? To avoid being killed and/or persecuted?

If more Native Americans embraced Christianity they could have prayed and the Lord would have revealed to them where to go.
3 Replies
-1
Mon 8 Mar, 2021 06:42 pm
JGoldman10 wrote:

Roman Catholicism IS A CULT. Kindly bug off.


Any form of Christianity is a CULT. What is your point?

Sigh. Roman Catholicism IS NOT CHRISTIAN.

The Catholics abandoned God's laws and teachings in exchange for their own.

Jews did the same thing.

The Catholics have their own version of the Bible. They added to and/or took things out of it.

The Christian Bible clearly says NOT to do that:

Also, Catholics do a lot of practices and have a lot of beliefs that contradict what's in the Christian Bible.

Jimmy Swaggart Ministries has a DVD series out about the truth of Roman Catholicism:

I believe I posted a link to this a long time ago.

I have a book that a Christian wrote about the truth about Roman Catholicism.

How can we be sure that all religions are wrong? - Discussion by reasoning logic
What if no religions are correct, but there still is a God? - Question by neologist
We are all like little children who often say: "Mom, Dad, leave me alone, I want to be on my own". - Question by Leaffan
Beyond tribalism; How well does your religious label serve you? - Discussion by MattDavis
Is religion responsible for the opposition to peace in the Israel-Palestine conflict? - Question by maxdancona
Concern for Religious Freedom or Preaching Political Messages? - Discussion by wandeljw
Are atheists being more illogical than agnostics? - Discussion by igm
Why believe in god? The theist perspective. - Discussion by msolga
Why People Seek Solace In Gods. - Question by mark noble
Catholic remarried couples should abstain from sex - Question by Tes yeux noirs
How can a good God allow suffering - Question by SawyerMentink
Copyright © 2021 MadLab, LLC :: Terms of Service :: Privacy Policy :: Page generated in 0.04 seconds on 09/27/2021 at 02:38:07
▲ ▼