Forums: Trump, Moron, Dupe
Email this Topic • Print this Page
3
Reply Tue 26 Oct, 2021 11:42 am
@Brandon9000,
sigh.
1 Reply
4
Reply Tue 26 Oct, 2021 12:36 pm
@Brandon9000,
So many of your posts involve you demanding a very specific piece of evidence, Trump caught on tape saying a particular phrase, or being photographed doing something, or something else that fits your extremely narrow parameters.

When that is not available you unilaterally declare yourself the winner and claim the matter is ended and then start accusing everyone else of mental illness and being obsessed.

It's the sort of thing adolescents do, appoint themselves judge and jury of everything.

There is plenty of evidence pointing to Trump's criminal and treasonous behaviour, and if you want to be wilfully blind because of what he says about guns and immigrants that's your concern, but drop the act.

You're not fooling anyone.
2 Replies
2
Reply Tue 26 Oct, 2021 01:45 pm
@izzythepush,
Lord Trump did a lot of his criminal behaviors in front of the world and he did not hide actions including his promoting a mob in front of the White House to attacked congress to stop the counting of the votes of the EC.

That act alone should be enough proof of his crimes not needing such actions as his phone tape conversations trying to get state officers to come up with votes for him out of thin air.
0 Replies
3
Reply Tue 26 Oct, 2021 02:51 pm
I’ll say it once more. The only people who can’t see what a criminal, immoral, lowlife Donald Trump is are the ones who don’t want to see
1 Reply
2
Reply Tue 26 Oct, 2021 07:51 pm
@snood,
snood wrote:

I’ll say it once more. The only people who can’t see what a criminal, immoral, lowlife Donald Trump is are the ones who don’t want to see


Do you think that such people do no in fact know what Trump is and are selling another version of the man for other reasons?
0 Replies
3
Reply Wed 27 Oct, 2021 04:57 am

“I believe if we had fully implemented the mask mandates, the reduction in indoor dining, the getting
friends and family to understand the risk of gathering in private homes, and we had increased testing,
that we probably could have decreased fatalities into the 30 percent less to 40 percent less range,”
Dr. Deborah Birx testified...

...There is plenty of evidence pointing to Trump's criminal and treasonous behaviour...

You've already pointed out what you will accept and nothing else.

As long as dark coloured people are being stopped at the border, black people are bring killed by your police, and the NRA are shooting up schools you're happy.

Taking five days to come up with a response isn't a good idea, once you leave it that long you're only confirming your simplistic thinking.
2 Replies
4
Reply Sun 31 Oct, 2021 04:26 am
@izzythepush,
Happy, but in denial.

This snippet of conversation reminds me of the times when people try to “convince” Trump fans that he’s a racist.

If you say what about this stuff, they just explain it as misunderstandings, false accusations, fake news, alternate facts, or anything else besides the truth.

And every time you point to another racist thing that comes out of his mouth, they would go into their sick tap dance.


These are the same people who don’t want the unvarnished truth about the racist underpinnings of this country taught in schools. They like their nice, comfy white supremacy. And will fight you to the death to hold on to that comfort.

When they look at Billy Bob stomping through the Capitol with a giant confederate flag, they see a patriotic tourist.

So, you’re absolutely correct not to waste time or effort trying to convince them of Trump’s immortality or criminality.
There are 70 million of them - half of the voting public - and they don’t need to be persuaded or tolerated.

It was widely reported that Trump was talking about a group of girls as young as fourteen.

That's not good enough for them, they want photographic evidence which would count as child pornography and illegal.
1 Reply
4
Reply Sun 31 Oct, 2021 05:30 am
@izzythepush,
If the ‘pee tapes’ ever surface, they’ll say they are “deep fakes”.

When family members or former business associates report of his using the n-word, they just say they’re disgruntled or trying to cash in.

Hey, if someone dug up a photo of him strangling a child, they’d say it was photoshopped.

His supporters are constantly trying to waste our time by demanding this or that.

It's like Glenn demanding access to a study on the coronavirus referenced by CNN,the access to the news report wasn't enough he wants someone to waste their time tracking it down only to say it's not a proper study because it did not use the words, "Eeh Ah Oo Ah Ah Ting Tang Walla Walla Bing Bang."

Rich people like Georgebob don't care about social issues all they care about is getting as rich as possible.

Then there's the bigots like Mot, the delusional nut jobs like Builder and the handwringing apologists like McGentrix who complain about being grouped with the above.

the GOP has become the "let's own the libs" trump party.

few can be reasoned with, and those few are disillusioned and trapped in a nightmare.

illinois rep Adam Kinzinger, for one, has decided not to run for reelection.

can't blame him one bit.

he was one of the ten R's who voted to impeach. 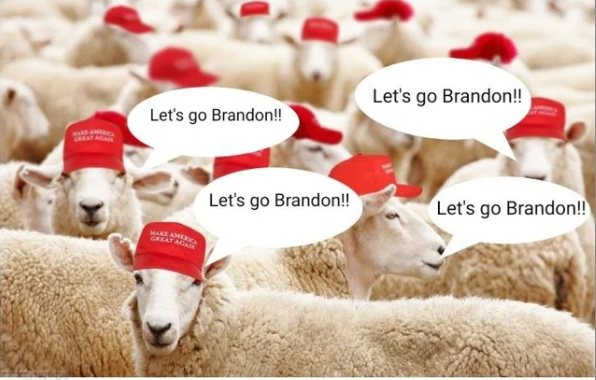 On Oct. 31, The Washington Post published a three-part investigation [*] that found that law enforcement officials failed to heed mounting red flags that there would be violence when Congress formalized the electoral college vote on Jan. 6. The project documented the consequences of President Donald Trump’s inaction during the Capitol siege and examined how his false claims of election fraud helped incite the attack and, in the ensuing months, fostered a deep distrust of the voting process across the country.

The Post investigation was based on interviews with 230 people and thousands of pages of court documents and internal law enforcement reports, along with hundreds of videos, photographs and audio recordings.

The Post provided Trump a list of 37 findings reported as part of its investigation. His spokesman Taylor Budowich provided a lengthy written response that included series of unrelated, inflammatory claims that The Post is not publishing in full.

In response to the investigation’s findings, Budowich said that the former president “greatly objected” to all of them. He disputed The Post’s investigation as “fake news” and falsely cast people who entered the Capitol on Jan. 6 as “agitators not associated with President Trump.” The statement repeated Trump’s false claim that the 2020 election was rigged.

“The media’s obsession with the January 6th protest is a blatant attempt to overshadow a simple fact: there is no greater threat to America than leftist journalists and the Fake News, which has avoided a careful examination of the fraudulent 2020 election. The media, just like the Democrats, do not want to see secure and honest elections. Instead of reporting the facts, outlets like the Washington Post sow division, hate, and lies, like it is doing with this story.”

“The media has failed to do its job, including truly exposing Silicon Valley for its role in illegally rigging the election with hundreds of millions of dollars in dark money--which is probably a gross underestimate. America is furious at the results of November 3rd and deserve answers. They deserve to protest and demand the truth from their Representatives. However, since the media isn’t asking the questions, it’s being left up to the people to seek the truth.”

illinois rep Adam Kinzinger, for one, has decided not to run for reelection.

can't blame him one bit.

he was one of the ten R's who voted to impeach.

that POS #45 celebrated Kinzinger's announcement as "two down, eight more to go!"


Kinzinger is also a very Conservative Republican, goes to show what is important in the current "Republican" party.
1 Reply