Is Crime Going Up or Down?

This is a conversation I have occasionally with my father. He watches the Justice Network and sees a continuous stream of crimes, so he is convinced that crime is everywhere when it fact crime has been on a downward trend for decades. This article is from the statistics website fivethirtyeight.com.

Will you get robbed this year? How would you rate your chances?

Over 10 years, from 1994 to 2004, the national Survey of Economic Expectations asked respondents to do just that. People estimated their risks for a whole host of bad-news life events — robbery, burglary, job loss and losing their health insurance. But the survey didn’t just ask respondents to rate their chances: It also asked whether those things had actually happened to them in the last year.

And that combination of questions revealed something important about American fear: We are terrible at estimating our risk of crime — much worse than we are at guessing the danger of other bad things. Across that decade, respondents put their chance of being robbed in the coming year at about 15 percent. Looking back, the actual rate of robbery was 1.2 percent. In contrast, when asked to rate their risk of upcoming job loss, people guessed it was about 14.5 percent — much closer to the actual job loss rate of 12.9 percent.

Take the crime rate. In 2019, according to a survey conducted by Gallup, about 64 percent of Americans believed that there was more crime in the U.S. than there was a year ago. It’s a belief we’ve consistently held for decades now, but as you can see in the chart below, we’ve been, just as consistently, very wrong. 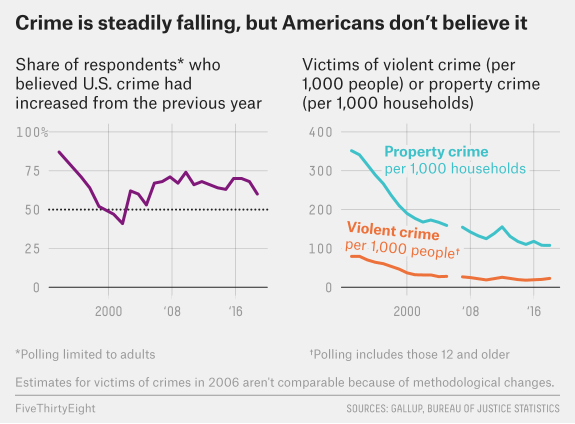 On the surface they paint a happy landscape. Looking deeper, one learns, quickly that the results vary from town to town. Further, while the total overall crime rate across the nation may have lowered, it is not too much of a useful tool.

Some crimes have decreased, others are on the upswing.

In New York City, crime is technically down. Rapes and robberies have decreased. Murder is up. Burglary is up. Grand Larceny is on the rise too.

So for the month of June, the rate from 2019 to 2020, the rate lowered by 5.5%. Of course since murder and shootings are greatly increased, it's hard to find consolation in the other numbers.. While in person robbery dropped, in home/business robbery (burglary) more than doubled.

It is clear why there is a sense of things having become worse.


www1.nyc.gov/site/nypd/news/pr0706/nypd-citywide-crime-statistics-june-2020
1 Reply
1
Reply Mon 3 Aug, 2020 01:20 pm
@Sturgis,
But that's the point of the article. Every year people think it has gotten worse. In reality we've been on a positive overall trend since the late 60's. Crime is personal so we overestimate it, but our misperceptions drive errant behavior. A couple of years ago, I tried to get my father to drive to the nearby big city and fly out to catch a couple of his grandchildren's graduation ceremonies. He said "oh crime is bad there". I was stunned. Crime was at a four decade low in that particular city and crime at the airport was unheard of, but no way could I convince him of that. We make a lot of decision around police spending and community investment based on our beliefs about crime. I think stepping back and looking at the overall picture is helpful on occasion.
1 Reply
1
Reply Mon 3 Aug, 2020 01:36 pm
@engineer,
To each their own, I suppose.

Personally, the thought of someone spitting on person, is of much less concern and worry than the sound of gunfire. Or the sound of glass breaking as a home is invaded....possibly with tenant/s inside.

Then again, I'm in NYC and Karl Marx DeBlahsio has been an utter disaster. Plus, the recent protests here had helicopters swirling around overhead for a few days and nights, nonstop.

Other than that, I have rarely felt unsafe. Even in areas which are supposedly crime-ridden.


The media...all media, both left and right, local and national and international, print, video and audio, are a part of the problem. They seem to thrive on the most gruesome stories they can find. If there isn't a brutal crime within 100 miles, no problem. Locate something in another country or state or someday, another planet.


(sorry, I seem to be in a testy mood)
1 Reply
2
Reply Mon 3 Aug, 2020 01:55 pm
@Sturgis,
That's the exact point I make to my dad, there is always a violent crime somewhere to put on TV. That it doesn't affect your area at all is not the point, if it bleeds, it leads.
0 Replies
1
Reply Mon 3 Aug, 2020 02:12 pm
Crime rate stats and such are way to measure quality of life. From my humble observation quality of life for most Americans has gone down ... WAY down. I'll take being robbed or mugged any day of being dead due to randomly passing by a COVID sufferer.
0 Replies
3
Reply Mon 3 Aug, 2020 03:32 pm
@engineer,
My wife is a Dr of Psychology and Criminology. As such I also know a very great deal about criminology (and psychology) after our 30+ years together.

Irrespective of country the expectation of crime in the public rises and falls in direct ratio to actual crime figures ... The more crime the less the fear of crime. The less crime the greater the fear.

As a simplified example ..... My wife and I live in an uber rural situation. Our nearest shop is 35km away in a small village of c.2000 people. That village and surrounding area has no reported crime for 2019 ... and that is normal.

So if we had say a random murder, then the fear of crime would go through the roof for most .... although the likelihood or them suffering crime is still next to 00.00%

However if my wife and I still lived in our last major European city, as we did back in 2008, if there was not several murders every other week ... That would be odd .... Hence our fear of crime was very low because it was the norm. It was what we expected.

In truth criminal activity levels have little to do with policing or judicial systems. Crime is dependent on the society, education and relative wealth.

It is a inalienable fact that the type of Retributive 'justice' favoured in the US & say the UK, is totally dysfunctional.

Right now the USA & UK are at around 60% first year adult recidivism and the deeply depressing 80% first year for youth offenders. Endless academic research clearly shows that retributive systems simply do not work for the surrounding society .... Such systems do not cause rehabilitation to happen in prisoners .... The more brutal the system, the longer the sentences .... the more it increases crime.

In N Europe however such as in Denmark, they use supportive rehabilitation methods/systems for criminal activities ...... following academic guidelines.

* All possible ways to not criminalise/imprison people are used
* Any sentences are uber short on purpose
* The goals have no cells, each prisoner has a single room. Which is en suite and definitely 3 star hotel level at minimum.
* The inmates doors lock from the INSIDE to protect their privacy
* Prisoners work for a proper wage in real jobs
* They are encouraged to shop at the on site supermarket
* They have their own cooking facilities in their rooms
* Sites are open ... no walls, no fences
* Conjugal visits are encouraged
* People with young families can choose to live on site in a bungalow with their family
* All prisoners have mobile phones
* The staff are NOT allowed to search the prisoners rooms by law ... Indeed one was recently sacked for doing so
* All in mates are given skill and social skill rehabilitation courses
* When they leave they are given as required - housing, social support and a proper job.

Now I could continue ..... but before the 'Hang 'em high' mob kick off in their total ignorance of the facts .... Do realise this.

The USA remember has 60% adult recidivism 1st year and in fact about 98% recidivism over 5 years ... Youth offenders 80% at year one and indeed 98% over two years ... Once in this system then youth or adult, they are almost certain to never leave it. So in the USA they let a prisoner out and within a year 60 of every 100 are back inside ... within 5 years, 98 out of 100 are back inside.

Denmark? They of the super low sentencing and hotel style accommodation? They have under 20% recidivism over 1 year ... and indeed over 5 years.

In Denmark they all pay huge taxation ... because they want to ... This is because they are an adult, educated society. They understand society is the responsibility of all within it ... If someone is sent to prison the question the public ask is "How did we let them down?" and want that fixed.

The US voting pool seem to spend most of their time fretting about paying a cent in taxation .... It is taxation which creates a modern, decent society. It is society which supports (or not) all those within it. America is a horror story, a truly nasty, viscous place, which is supposedly a meritocracy.

But that is not true, now the US is almost entirely post industrial it's various societies have collapsed in most every city ..... and the ignorant are looking for someone to blame.

Due to their lack of education and understanding they always start blaming anyone that is not 'them' ... Ergo, it has to be the fault of immigrants, and religious minority groups and socialists. When in fact the people who are the issue are the ignorants who vote for the like of Trump.

Somehow I doubt any of the Trump type understand it is precisely what happened in Germany and why Germany ended up with National Socialism.

It is pathetic to behold.

1 Reply
0
Reply Tue 4 Aug, 2020 09:24 am
@Teufel,
Nice post Teufel. If only everyone thought like you do (and Denmark in regards to dealing with crime, etc), the world would be a far better place, nice work.

At a time - Approaching - You will encounter a choice - Of two, inevitable journeys.

I know how this ends for you.

Are you happy being you?

I’m with the people I love most in the World, just been to see friends for a drink.

...just been to see friends for a drink.

I myself never cottoned much to peach infused alcohol. Never touched the stuff such as peach Schnapps.

Come to think of it, I'm generally not too fond of anything peach...

although as a tea it can work.


As a child I was often disappointed when I'd confuse a peach and think it was an apricpot.

The above rambling diversion was presented to help people get back to the opening topic.

The above rambling diversion was presented to help people get back to the opening topic.

A glass of orange juice and some carbs used to be my relief method.