Next Sunday, the Tour will be here:

And to finish this 'forecast', on Independence Day (USA), it's this part of France

Vendée is part of the French region «Pays de la Loire» (consisting of departements are Morbihan, Ille-et-Vilaine, Manche, and Orne to the north, Eure-et-Loir to the northeast, Loir-et-Cher and Indre-et-Loire to the east, and Vienne, Deux-Sèvres, and Charente to the south.

The area today called the Vendée was originally known as the Bas-Poitou. In the south-east corner, the village of Nieul-sur-l'Autise is believed to be the birthplace of Eleanor of Aquitaine (1122-1204) and was part of her Kingdom. Eleanor's son, Richard I of England (the Lionhearted) often based himself in Talmont. The Hundred Years' War (1337-1453) turned much of the Vendée into a battleground.

Since the Vendée held a considerable number of influential Protestants, including control by Jeanne d'Albret, the region was also greatly marked by the 36-year French Wars of Religion which broke out in 1562. Eventually King Henri IV, issued the Edict of Nantes and the Wars came to an end. When the Edict of Nantes was revoked in 1685, it caused many Huguenots to flee from the Vendée.

It is also remembered as the place where the peasants revolted against the Revolutionary government in 1793. The bloody conflict, in support of the Monarchy and against the changes imposed on the Roman Catholic Church erupted in defiance of the Revolutionary government's military conscription. A guerrilla war, led by an underground faction known as the Chouans (screech owls), known as the Revolt in the Vendée and would cost more than 100,000 lives until it ended in 1796.


The region slowly recovered from the devastation of the Vendée Wars. Vast areas of pine and "chêne vert" (holm oak) were planted from the mid-19th century to anchor the shifting sands along the coast around St-Jean-de-Monts, Les Sables-d'Olonne, and Longeville. The coming of the railways in the 1860s helped to develop tourism around the ports of St-Gilles-Croix-de-Vie and Les Sables-d'Olonne where you can still see some fine examples of Victorian-period seaside architecture. The railways also provided a means of escape for many of the inhabitants of marshland farms, leading to a rural exodus around the turn of the century. From the late 18th until the mid-20th century there was a coal-mining industry at Faymoreau-les-Mines, north-east of Fontenay-le-Comte.

For more than four years of World War II the Vendée was occupied by German forces, who commandeered the coastline and denied access to many villages along it. Vestiges of their reinforcements can be seen on the beaches at Pont-Jaunay, Jard and other places.

Tourism has today taken the lead as the county's main money-spinner. Close behind come agriculture (beef and dairy cattle, pigs and poultry in the woods and hills of the "bocage"; cereal-growing in the plains; sheep and cattle in the marshes; and early vegetables on the island of Noirmoutier); fishing (sardines, tuna, sole and langoustines, oysters and mussels); manufacture of clothes and shoes; boat-building (St-Gilles-Croix-de-Vie is the home of the world-famous Bénéteau yachts); food-canning; and the construction of agricultural machinery.

The tour will start on the Island of Noirmoutier, which is linked to the mainland by a bridge and has 9,000 inhabitants.

Its salt marshes alternate with polders and cultivated areas of land, which produce a highly appreciated variety of potatoes.

But the sel is used for some nice sweets as well:

0 Replies
1
Reply Thu 30 Jun, 2005 11:10 am
A really interesting object - seldom visited, since tourists usually just stay for recreation and fun on the island 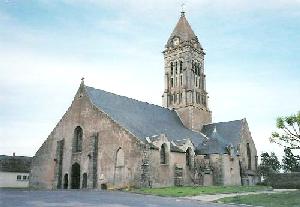 Some nice photos (just click on the thumbs) and a short history (in French) are to be found on the website of the parish HERE
0 Replies
1
Reply Thu 30 Jun, 2005 11:30 am
A really impressive building isn't to be found at this place, besides the church with its crypte and 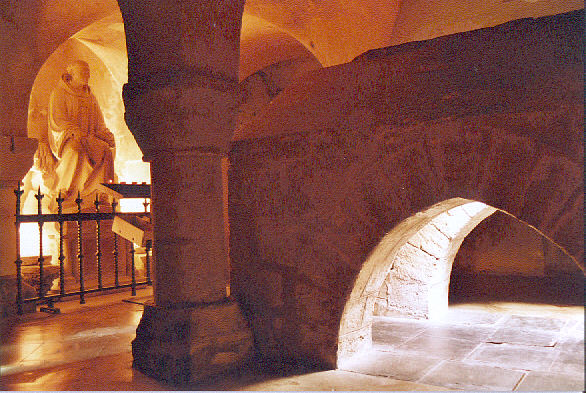 But now, let's look at some of those in Vendée

The first half of the 16C witnessed the emergence of a more residential architecture, and the former fortified castles were thus taken over and altered. The château d'Apremont was rebuilt in 1540 by Philippe Chabot, admiral of France and friend of François I's, who had it opened by wide windows and fitted with a belvedere gangway. A broad bridle ramp dug in the rock links up the edifice and the river it towers above.

The dwelling of the de Bessay family on these premises is attested since the 13C. Giron de Bessay was a personal friend of Henri de Navarre's, and he became vice-admiral of Guyenne. One of his descendants, the cardinal of La Fare, was born in the circular Renaissance tower erected in 1577 near the central main building that has been re-fitted during the Classical period. A felicitous restoration undertaken in 1988 has just been completed.
0 Replies
1
Reply Thu 30 Jun, 2005 01:38 pm
Château de la Chabotterie

Built in the 15C by the Chabot family after which it was named, the castle was significantly altered in the 17 and 18C, and then enriched with new fittings in the following century. La Chabotterie witnessed the end of the Vendée war after Charrette was captured. It is now exclusively devoted to the recounting of these bloody times (exhibitions, audiovisual animations).

85440 Avrillé
Opening Times: interieur, open w.-e. and bank holidays from April to May. Daily in June to September.

Initiated in 1560, the building-up of the castle was interrupted after twenty years and only resumed in 1773. The residence is nonetheless a rare instance of Renaissance architecture in this region. The estate stretches over 86 hectares. It is embellished by a wide ornamental pond dug in the 18C and edged by centenary trees.
0 Replies
1
Reply Thu 30 Jun, 2005 01:40 pm
Perhaps the most picturesque here

85200 Fontenay-le-Comte
Opening Times: interieur, open from May to September. Groups all year round on request. Built in 1580, this castle was restored and its façade redesigned in the 19C when it became Marquis Octave de Rochebrune's property. The duke of Sully, Agrippa d'Aubigné and Georges Simenon more recently sojourned in the castle which has retained its stone-coffered ceilings and its monumental Renaissance fireplaces one of which is exceptionally adorned with alchemical symbols. It preserves wood trims from the château de Chambord, several 17 and 18C painting masterpieces, furniture and clothes.