From NASA's "Beyond Our Worlds" An artist's depiction of a spacecraft under the power of solar sail. NASA is exploring the use of such alternatives to traditional rocket propulsion for cleaner, more efficient methods of reaching deep space. 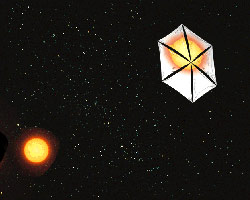 . The basic concept involves using the light energy of the Sun to slowly accelerate the sail to tremendous speeds; in the case of Interstellar Probe, up to 41 miles a second. Shortly after passing through the Asteroid Belt, Interstellar Probe would discard its sail and coast past the orbits of the outer planets.

"Highland mangabey" is first African monkey to be described in more than two decades. 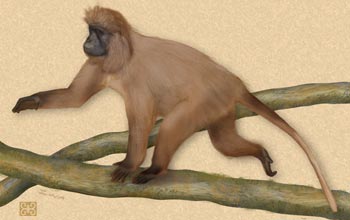 Two research teams working independently in Tanzania have discovered a monkey that had eluded scientists despite decades of research in the region. The "highland mangabey" is the first monkey species to be described in Africa since 1984.

The entire known range for the highland mangabey totals a mere 28 square miles (73 square kilometers). Due to the combined threats of logging, charcoal-making, poaching and excessive removal of forest resources, this rare animal is at great risk of extinction, and the researchers estimate only a few hundred of the monkeys remain.

All the solar sailing info is extremely interesting. I understand that sunlight actually has weight - avg several pounds of it landing on Earth each day.

I wonder when the dimensions of Earth will be officially revised. Each year the planet is growing larger - with the flora and fauna (which originates from sunlight) adding at least an average of 1/16 to 1/8 inch to the mass. Interesting..

Saw a piece about Voyager's "departure" and passing through the next barrier. Hope it can survive all the buffeting about and flotsam and jetsam of deep space. The sail concept has been around for some time. All it would take is one teeny, tiny piece of something or other..... and the speed would be greatly reduced by the puncture. Theoretically.

Loved the new monkey!!!! For such a small area, they ought to make the entire area off-limits to everyone.

I want to go search for that story about bird flu and migrating geese.
0 Replies
1
Reply Thu 26 May, 2005 08:46 am
My success rate at posting images has been low recently. This one may be too large, or this site may not recognize Audobon Magazine as a public site. We'll see. If it doesn't come through, it is on the site, which also has a very interesting story about the bar-headed geese.

The bar-headed geese were found dead in Qinghai Lake, China's biggest saltwater lake. The area is home to a group of rare, endangered birds, including black-necked cranes and wild swans.
0 Replies
1
Reply Thu 26 May, 2005 08:47 am
Could someone please help me figure out why my images don't post? Pretty please.
0 Replies
1
Reply Thu 26 May, 2005 09:08 am
Merry, the title of Clarke's novel called "The Wind From The Sun". He wrote 18 stories in the series, published '62 - '72. Remember Clarkes' "Dolphin Island"? <Published: 1963> when a cargo hovership crashes into the Pacific, the sole survivor is saved by a school of dolphins who guide him to an island on Australia's Great Barrier Reef.

sumac, the disease affecting birds called Avian Flu. Most suseptable to the disease are farmed animals <turkeys, chickens, ducks> culling millions of birds in the United States and oversees in the past two years.
Factory farms housing a large quantitiy of birds administer the avian flu vaccine.

For transfering pics to a2k:
Right click the photo, click 'properties', highlight the URL, right click and click copy. Open a2k window, click IMG, then right click mouse again and place cursor on IMG window and click "paste". When url address appears, click "OK". <at the website you may also have to click "ok" at the photo 'properties' window after highlighting and copying the url address>
0 Replies
1
Reply Thu 26 May, 2005 11:31 am
Hmmm. I appear to be forgetting two parts of two steps. I will try that again.

Yes, normally "farmed" birds/poultry is at risk. That is why this news is particularly disturbing. The bar-headed geese are one of the high-altitude migrators, wintering in India and then crossing Mt. Everest and nearby ranges to get to their summer habitat in China.
0 Replies
1
Reply Thu 26 May, 2005 11:34 am
I take that back. Just reread your instructions and I appear to be doing things correctly.
0 Replies
1
Reply Thu 26 May, 2005 11:35 am

No go. Is there a maximum size (which ehBeth regularly exceeds) that we are supposed to use here?

JoanLee is at 244 clicks for the WildClickers (and the world in general)!

Today, Thinkzinc's at 156 clicks, and JoanLee is at 245 clicks - so the clicks are definitely counting on the aktbird57 total.


(I pasted her link into another browser address window - deleted the google info between the http:// and the www. - hit enter - and the pic came up - then I followed the image posting protocol already posted - there is some kind of weirdness about posting google thumbnails that I've never mastered)
0 Replies
1
Reply Thu 26 May, 2005 05:01 pm

bar-headed geese on the lower right

from http://mawba.com/ (turn up your speakers if your dogs like to listen to squawking


scroll down to
Quote: