part of our neighbourhood Falun Gong troupe - always well-received in the parade
0 Replies
1
Reply Sun 3 Jul, 2005 05:39 pm
part of the basketball club
this kid definitely had a 'tude of his own

PS: I noticed your new signature. It reminded me of one of my old sayings back when I could back it up physically. "Happiness is = Being able to say I have no tan line." grin
0 Replies
1
Reply Sun 3 Jul, 2005 05:55 pm
It was a lovely small town parade, danon, in the middle of Canada's biggest city. Something kinda neat about that dichotomy.
My friend Brenda and I teared up, as usual.
We are mushballs.

Here's hoping everyone has a smalltown parade to go to tomorrow!

ehBeth, thanks for sharing your photos! Looks like you had a wonderful day celebrating.

Seems to come more quickly than in the past.

Now it is time to get ready for Bastille Day. Wayfarer, any ideas?
Maybe starting from Département #61--Orne ?

Orne is in the current region of Basse-Normandie and is surrounded by the departments of Eure, Eure-et-Loir, Sarthe, Mayenne, and Calvados; it is the only departement of Basse Normandie and Haute Normandie to be landlocked.

Yes, we Wildclickers are still moving in the right direction.

At our current rate of saving rain forest - we will have saved ONE HUNDRED acres in 4.8 years from now. That's at approx the turn of the year 2010.

Most of all hoping Wayfarer will start new thread with guardian angel George (late, darling, doggie) as subject, being entirely convinced that our dogs have great wisdom we lost in our rush to "civilization" but they share our spirit and stand ready to help us even after their deaths in that respect.

Just as planned..........
With the second stage of the two-part spacecraft, known as the flyby stage, watching from a safe distance, an 820-pound copper-core "impactor" craft smashed into the nucleus of comet Tempel 1 at 23,000 miles an hour, sending a huge spray of debris into space 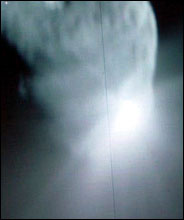 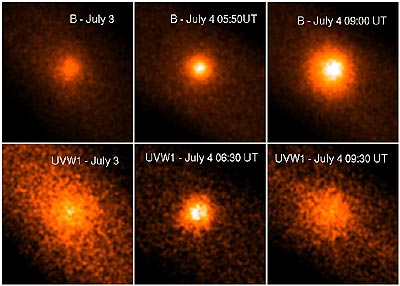