Why California is watering down its wine 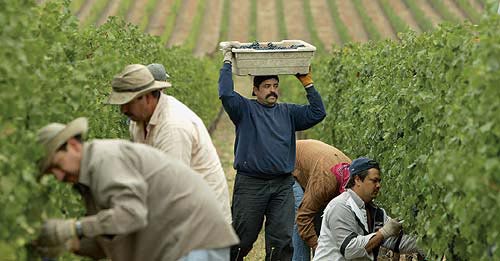 Few insiders will admit it, but the dirty little secret about Californian wines today is that many of them are adulterated. That happens to be no bad thingThe longer, the cheaperMuch of a muchness?John Andrews is the Los Angeles correspondent for The Economist

That's why it was watered


Thanks, Walter. Last year a restaurant opened up downtown called Brix. I had to ask what it meant.

People are becoming very, very serious about wine around here.

Seems to me, if the end-result wine wins prizes for its taste and flavor, then it is a pretty good argument for adding water. I imagine the grape growers would be up in arms about it.

What an industry -- all those rules, designations, appellations, etc.

Even though Mr Drake reckons that "anybody getting sugars over 26½ degrees is adding water," very few winemakers in Napa and Sonoma are willing to confess to the practice and praise its worth. (Karl Wente, whose family produces the Nth Degree wines in Livermore, is a notable exception.).


I had to wonder what Wente was saying, so I went searching. I thought you might be interested. He's only twenty-seven -- fifth-generation winemaker.


The following long quote was taken from this article out of New Zealand, but I added it all for your convenience:

Karl Wente presses the back of his hand down into the vat of crushed Cabernet grapes, then watches the dark purple liquid fill his cupped palm. He sips the newly fermented juice, which will become an ambitious new wine, Wente Family Estates Nth Degree Cabernet. He plans to sell it for $50 a bottle.

Wente smiles, clearly delighted with the result: He's added just the right amount of water to the wine.

That's heresy, as far as most wine lovers are concerned. The idea of pouring a few buckets of water into a steel fermentation tank smacks of watering down, stretching and cheapening wine. And to do it in pursuit of a showcase wine - the Wente family's first - well, who would do such a thing?

Actually, in California it's been done for decades. Wente, an aggressive 27-year-old, fifth-generation winemaker in Livermore, Calif., stands out not because he adds water to his wines, but because he's willing to talk about it.

Wente is shattering the silence, he says, because "watering back" - adding water during fermentation - can be an important tool for improving California winesAdding water at any point in the winemaking process has been illegal in France since 1907 and now is illegal in all countries that are members of the International Organization of Vine and Wine.

"This law was introduced at that time because there was an overproduction of wine in general," Saucier says. "If you increase the yield of wine either by viticultural practice or by watering down the wine, you will decrease wine quality."

That is, unless there's a crisis, says Sicilian vintner Marco de Grazia, who exports a broad selection of Italian wines to the United States. Last year's vintage in Sicily, for instance, was characterized by an extremely hot and dry summer. Sugar concentrations went through the roof. There were stuck fermentations everywhere, he says.

De Grazia is quick to say he didn't add water during fermentation, but that many of the vintners he knows did. "It's illegal, of course. But what are you going to do?"

In California, it's legal - sort of. State regulations allow adding water "to facilitate fermentation." The intent is to avoid technical disasters from occurring during the winemaking process, most specifically what is known as "stuck fermentation," in which the sugars in the juice do not convert to alcohol. The amount of water and whether it is necessary to add it are left entirely to the discretion of the winemaker.

Local regulations reflect local necessity, according to Mary Ewing Mulligan, a master of wine and president of the International Wine Center in New York. Although throughout France it is illegal to add water to wine, in Burgundy, where the typically rainy, cold weather retards the natural development of sugar in the grapes, winemakers are allowed to add sugar during fermentation, a process known as chaptalization.

Adding sugar is less invasive than adding water, Saucier says. "When you add sugar to the juice, it affects only the alcohol of the resulting wine. If you add water, you are diluting and modifying all your initial wine parameters, including thousands of quality compounds like aromas and polyphenols."

But Mulligan argues that adding water is no worse than adding sugar. "I see it as a correction that should be used when it's necessary and appropriate - that is, when the grapes have been left too long on the vine and sugars are too high, making the alcohol levels unacceptable," she says.

The universality of the problem in California and the resulting need to add water every year raises a bigger question for Mulligan: "You need to rethink whether you should grow grapes in a region that needs to have overripe fruit to get the flavors you want," she says.

The necessity of adding water is a matter of simple chemistry for winemakers such as D'Alfonso and Wente. In much of California, sugars develop early in wine grapes and continue to build up until harvest. The rest of the flavors and tannins that make great wine may not show until later, in some cases not until the grapes are overripe.

By contrast, in France, with its cooler, more inclement weather, the sugars in wine grapes develop more slowly and in concert with the rest of the flavors and tannins. Sometimes they fail to develop fully, or at all.

Wineries across California have been leaving their grapes to hang on the vine longer and longer, striving to capture the full complement of flavors. That means the grapes have high sugar levels, which translate into high-alcohol wines, as high as 18 percent.

Table wine is legally defined as having less than 14 percent alcohol, so the issue isn't only one of balance; excessive alcohol also raises the federal excise tax rate wineries must pay on the wine.

To tone down the alcohol, there are only two options, says Linda Bisson, professor of oenology at the University of California at Davis: Add water during fermentation, or de-alcoholize the wine after fermentation, which, from Bisson's perspective, is a far more invasive mechanical process, and so, less desirable.

Before April 2002, no one would have admitted that, according to Wendell Lee, general counsel for the industry-supported Wine Institute. Until then, the conventional understanding of the state regulations was that nothing more than the moisture left in a tank after washing was allowed. The Wine Institute strongly advised its members against adding water during fermentation at all.

As a matter of practice, however, the state doesn't act as a watchdog on this issue.

(Okay, I'll do penance for my last response and buy you a Augburger Himmelströpfchen aka Schwabenbräu :wink: )

I guess that means, you have a permission slip for Augsburg

Piffka, I don't drink that often so when I do, I get "tippsy" very fast.
Alcohol content? I actually don't know, the wine was good though.
0 Replies
1
Reply Fri 20 May, 2005 10:20 am
Looks like almost everybody BUT the United States is in the OIV -- International Organization of Wine & Vine

News is that Chile just joined as the 39th member.

I guess that means, you have a permission slip for Augsburg