There is a better explanation for taxonomic charts and the way that families of living creatures appear to be able to be described in what look like tree diagrams. Taxonomic charts are evidence of object-oriented design. In other words, it looks as if God has used the selfsame methodology which you would call best practices in software engineering. The analogy would be between our living world and a pure object language such as Smalltalk or Eiffel which begins with a base object for the entire programming system.

The clumsy manner in which you dance around here seems to make that a distinct possibility, ros.
0 Replies
0
Fri 7 Sep, 2018 04:19 pm
@farmerman,
Quote:

. Spoken like a true bigot. Concentrate on the world view of the group of scientists and the publication rather than the facts.

I dont think I know an atheist who isnt a bigot. I cant say that about the John Birch Society.
2 Replies
1
Sat 8 Sep, 2018 09:07 am
@brianjakub,
the paper is a function of the Birchers, or didnt you know??

Concentrate on the world view of the group of scientists

I did, and to my un surprise I saw that they would introduce your "Experts" first based upon their religious views first. and not their scientific expertise.
Sounds a bit like the Trump Whitehouse."**** the law and th Constitution" we must first protect the President!!"
3 Replies
1
Sat 8 Sep, 2018 09:43 am
@farmerman,
Here you are, farmerman, taking part in a gungasnake thread about "science" but you can't seem to discuss science that matters, science that is real.
0 Replies
0
Sun 14 Jul, 2019 07:13 am
@farmerman,
Quote:

If I said that "Gee I never knew the KKK was made up of Creationists" would you still call me a bigot?

But the KKK has beliefs similar Nazism and they based the idea that they were the master race on Darwinism. A bigot is someone who judges an argument according to the person who is delivering the argument rather than the validity of the argument.
0 Replies
1
Sun 14 Jul, 2019 07:20 am
@farmerman,
My quote was
Quote:

. Spoken like a true bigot. Concentrate on the world view of the group of scientists and the publication rather than the facts.


I meant Spoken like a true bigot who concentrates on the world view of the group of scientists and the publication rather than the facts.

I did, and to my un surprise I saw that they would introduce your "Experts" first based upon their religious views first. and not their scientific expertise.
Sounds a bit like the Trump Whitehouse."**** the law and th Constitution" we must first protect the President!!"

So, the introduction describing the religious views of the person disqualifies their argument? Why not just discuss where their argument is flawed?

I haven't seen Trump do anything unconstitutional yet, could you give an example?
0 Replies
1
Thu 19 Nov, 2020 09:25 am
I love how half the people here are like "they must not be real scientists then."

Congratulations, typically the No True Scotsman fallacy is applied to religion, not science. But that still doesn't mean there can't be scientifically feasible reasons why real scientists might deny it.

Aside the idea that because this is in Istanbul, Turkey, they might just be religious nutters posing as scientists they are a few things to consider.
First, they might be right in saying that the theory of evolution is indirectly or directly responsible for communism and national socialism (also known as the Nazi party), two dictatorship systems that killed and oppressed millions, and also eugenics which was responsible for trying to weed out undesirable races. Without the pureblood mentality that was behind Hitler's hatred of the Jews, he had only a few personal grievances, and things would have gone better.
Second, as wikipedia has pointed out, not only are there theists who believe in evolution
https://en.wikipedia.org/wiki/Theistic_evolution
but there are many alternate theories to Darwin's ideas. In particular, I favor Lamarck's and Geoffroy Saint-Hilaire's ideas. I have not known natural selection to be effective at anything but ethnic cleansing. But species do tend to adapt to environments.
https://en.wikipedia.org/wiki/Alternatives_to_evolution_by_natural_selection
Third, really, I do not believe the Linnaean classification of reptiles as close to birds is sound. They do so purely on the basis that feathers are like scales. But their anatomy is nothing alike.

Here is a dinosaur skeleton.

Now here is a crocodile skeleton.

Reptiles have cervical, thoractic, lumbar, and caudal vertabrae. When we get into internal organs, the differences widen even further.
Reptiles, aside from amphibians having gills or whatever, are fairly similar to humans internally. 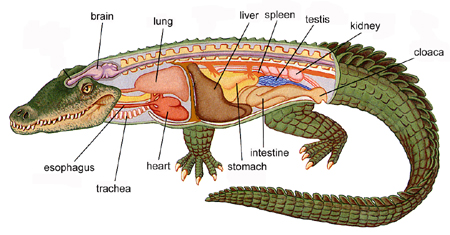 With me so far? This is what a bird's anatomy looks like.

Much less anatomy in general, and they have organs like the gizzard that neither mammals nor reptiles have. Conclusion? Reptiles did not evolve into birds (which are less evolved, and more specialized), they evolved into mammals if evolution took place at all.

1 Reply
2
Thu 19 Nov, 2020 10:00 am
@farmerman,
Somebody said that gungasnake died. I shall miss him as he at least tried to make arguments ,even though quite flawed.

Somebody said that gungasnake died. I shall miss him as he at least tried to make arguments ,even though quite flawed.

I don't know if you are completely closed minded or not... but I will take a chance that you are open to actual facts.

Science is about things that are testable. When there is a question in science, you set up an experiment or a set of observations, and then you make the measurements to see what is correct.

Lamark's claims are pretty easy to test. And they are factually incorrect. Hilaire's claims are equally testable (and false). That means that Lamark and Hilaire are simply wrong.

In science there are right answers and wrong answers. These answers are determined by experiment. If the experiment or the observation contradicts with your belief, then if you claim to be a Scientist (or a Scotsman) you need to drop your belief.

This is just how science is done.

St Hillaire not so much
1 Reply
0
Thu 19 Nov, 2020 05:12 pm
@farmerman,
My understanding of Lamark (which may be simplistic) is that if you provide stresses to change a fruit fly, it's children will inherit the change. At the extreme... if you pull the wings off of a fruit fly, it should have wingless offspring.

Is there more to it?

1 Reply
1
Thu 19 Nov, 2020 05:32 pm
@maxdancona,
Since epigenetic expression can retain "acquired characteristics" for a few generations in which they can become fixed generationally. Lamarck is getting a new look-see in light of epigenetics .


St Hillaire, is like a poster child for ID. His big observation wasnt that big to start with. He just had enough money to be listened to.
1 Reply