Forums: Environment, Global Warming, Politics, Environmentalism, Science
Email this Topic • Print this Page
1
Reply Mon 30 Nov, 2020 09:20 pm
@hightor,
Good answer. That was a very good explanation of your opinion. I appreciate the detail. I learned a lot.
0 Replies
2
Reply Thu 3 Dec, 2020 09:33 am
Spring starts earlier and earlier. Since 1960, apple blossoming has been delayed by five days per decade. Birds also breed earlier.
Because the winters are getting milder, many birds such as storks, starlings or wrensels no longer migrate south at all. They still find food on the banks of waterways and a few really frosty days do not bother them. Some blackcaps even no longer fly south, but north: to England. The climate there is relatively mild and there are many birdhouses with food, just like here.


Now, data from 120,000 birdwatchers in 48 countries shows forest birds have expanded their range while area occupied by farmland birds has shrunk.

Europe’s breeding bird populations have shifted on average one kilometre north every year for the past three decades, likely driven by the climate crisis, according to one of the world’s largest citizen science projects on biodiversity.

Scientists with the Copernicus Climate Change Service said that global temperatures in November were 0.1 degree Celsius (about 0.2 degree Fahrenheit) above the previous record-holders, in 2016 and 2019. November 2020 was 0.8 degree Celsius (or 1.5 degrees Fahrenheit) higher than the average from 1981 to 2010.

• Globally, last month was the warmest November on record, by a clear margin
• For Europe, November tied for second warmest on record
• In the Arctic, Second lowest sea ice extent for November since satellite measurements began in 1979. Meanwhile, in the Antarctic levels sea ice extent was close to average, but with large regional variability

For 10 days in September, satellites in orbit sent tragic evidence of climate change’s destructive power.
0 Replies
3
Reply Fri 22 Jan, 2021 10:44 am
We need to start refreezing the Arctic Ocean as soon as possible to save our megacities

A top scientist has warned we need to start refreezing the Arctic Ocean as soon as possible, if we are to save many of the world’s largest megacities from sinking within 30 years.

Sir David King laid out the stark picture of what could arise after a speech given by the former governor of the Bank of England, Mark Carney. Carney’s BBC Reith Lecture on climate and finance was interesting enough, but it was the question from Sir David that made me sit up.

Sir David was the chief scientific adviser to both the Blair and Brown governments and is currently the chair of Independent SAGE, which has been alerting the public about what government action is actually needed during the pandemic.

He asked what should be done about the Arctic icecap melt passing the irreversible tipping point that scientists have been warning about for decades - although whether this point has been reached is still a matter of debate for many in the scientific community.

When I spoke to Sir David after the lecture, he explained that a climate tipping point occurs when levels of carbon in the atmosphere pass a point whereby the earth’s own thermodynamic processes take over and trigger greater heating. By then, even if we immediately halt all new carbon emissions, the planetary heating increases regardless. The Arctic ice-cap melt, he said, is one of these tipping points.

Rising carbon levels have already led to a 4C rise in Arctic temperatures, which has led to a 75 per cent loss of Arctic summer-ice volume. This has led, in turn, to the dark waters of the Arctic Ocean being exposed, which absorb heat from the sun. If they were covered with white ice, this would reflect it and thus keep the earth cooler.

But the warmer Arctic waters are now melting the adjacent enormous ice-cap on Greenland at a rate seven times faster than in the 1990s, which in turn is raising global sea-levels faster than predicted.

Sir David said that as adviser to the UK government, he had successfully argued that globally we should not go above a 1.5C rise in temperatures for safety. He then astounded me by saying he now realised this was wrong, and believes the passing of the Arctic tipping point has been reached.

He said the 1.1C rise that we already have is too dangerous - and candidly admitted he believed US climate professor James Hansen had been right after all; in 1988, when he warned the US Congress that we should not pass 350 ppm. We have now breached 415 ppm and are heading fast towards 500ppm, Sir David said.

So, what should governments do now that this tipping point is in crisis? And how can we now save Mumbai, Jakarta, London, Kolkata – and other vulnerable cities? According to Sir David, governments need to do three things, the first of which is to halt all new carbon emissions as soon as possible – and then get back to the Hansen safety level of 350ppm, by removing 40 to 50 million tons of CO2 from the atmosphere per year.

But in order to do this, they would need to restore much of the planet’s destroyed peat-bogs and forests, to help absorb millions of tons of carbon using natural ecosystems. This would have the added benefit, if done correctly, of reversing the ecocidal destruction of wildlife populations.

Sir David also said his Centre for Climate Repair is working with scientists across the world to identify engineering approaches to atmospheric carbon removal – but that even this might not be enough to save our megacities from disappearing under the waves!

Third? We now have to literally refreeze the Arctic Ocean, otherwise the heat from its open seas will continue to accelerate the melting of the Greenland ice-cap – which has enough water stored in it to raise the world’s oceans by seven metres. I admit that I laughed at the outlandishness of such a concept – but he chastened me by pointing out that studies are already being carried out into how this might be achieved.

Research at Edinburgh University has proposed that if the clouds over the Arctic in summer are sprayed with sea-water, the salt in it would make the clouds whiter. This would reflect the sun’s heat and the ocean waters below them would start to refreeze. But how to get governments to take the collective action necessary?

Sir David agreed that the UN COP process appeared incapable of acting in time, as the oil-producing nations can veto, or dilute, the outcomes; and so lead to dangerous compromise.

The solution he advocated was to build on Mission Innovation, which was launched at the Paris COP in 2015 to create a $30bn climate innovation fund – by 30 countries willing to take more radical action.

Twenty-three billion dollars has already been committed, with the hope the remaining $7bn will be funded by the Biden administration.

Sir David advocated that Mission Innovation be expanded at the COP to include political agreements on how to reduce carbon emissions.

He advocated progressively increasing a global carbon tax to $150, but when I pointed out the political difficulties of implementing such high carbon taxes in poorer countries – and that it was too slow in light of the emergency – we discussed instead how to divert the $5tn planned for new fossil fuel projects over the coming decade over to renewables, instead. For this to take effect, central banks should immediately mandate the ending of all such new fossil fuel investments.

Diverting this $5tn away from dirty fossil-fuel investments into renewable energy, energy efficiency and carbon-removal measures, Sir David agreed, could provide a sliver of hope in a world where some terrifying tipping points have already been passed.

Back to you, Mark Carney… 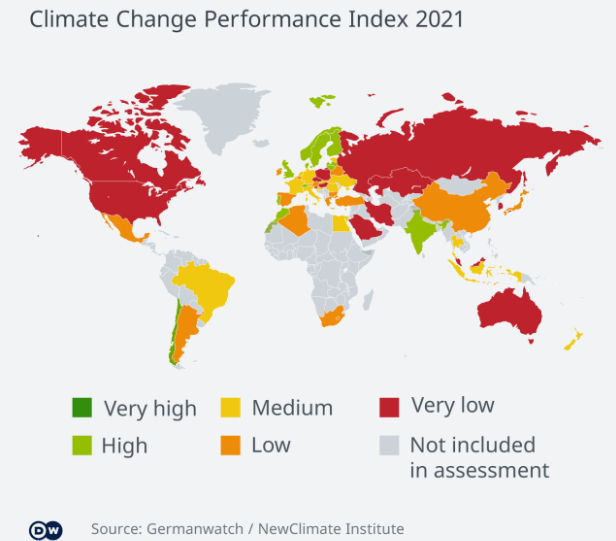 Climate Change Performance Index: How far have we come?
Quote:

In a repeat of 2019, the three top spots on this year's Climate Change Performance Index have been left conspicuously empty. Quite simply, according to the more than 100 experts who assessed the 58 countries — and the EU — responsible for 90% of global CO2 emissions, because their climate protection efforts are lacking.

The nations on the list are scored on the basis of energy consumption per person, as well as their strategies used to reduce it, the percentage of renewables in the energy mix, the pace of clean expansion, and what policymakers are doing to implement the climate change agreement at home and internationally.

"There is gradual progress in almost every area. But this is far too slow and does not correspond to the urgency that is necessary to protect our planet," said Professor Niklas Höhne of the Cologne-based NewClimate Institute, which analyzes the climate protection activities of countries around the world.

"One thing that stands out is that the EU has improved significantly,” he said. "The EU is trying to move forward on policies with long-term goals, and the new short-term goal is to try to bring other countries along for the ride." Thanks to a much higher scoring climate policy, the EU has advanced six places to 16, and has received the overall rating "good."
[...]
According to the index, Sweden is the international role model for the fourth year in a row. While the Nordic nation did not do well enough to occupy one of the top three slots, and still has some way to go to achieving the Paris climate goals, it has set high standards in CO2 emissions, renewable energy and climate policy.
[...]
Sweden is followed by the UK, Denmark, Morocco, Norway, Chile and India — in that order — all with the rating "high." Finland, Malta, Latvia, Switzerland, Lithuania and Portugal also got the same ranking.

Until 2009, Germany was a role model in climate protection, even taking the top spot in 2008. But in the years that followed, its performance has largely been on a downward trajectory. The only exceptions were 2012 and 2013, when the expansion of renewable energies boomed in Germany following the nuclear disaster in Fukushima.
[...]
Also around the middle of the list are Croatia (18), Ukraine (20), Egypt (22), France (23), Indonesia (24) and Brazil (25).
[...]
In recent months, China and a number of other countries have declared their intention to reduce their high CO2 emissions to zero — most by 2050, China by 2060. US president Joe Biden wants to make the US climate-neutral by 2050 and the power supply climate-neutral by 2035.
...