i con't accept your premise that an eruption like Pinatubo would do that, alone.

Then you will be pleased to note I was using it to paint volcanoes with a broad brush. You say they dont matter, I say they do. Volcanic activity is one of the major causes of climate change.

I note that you don't even name your source

Didn't you read your source? The first ref you gave is the same as mine. I would hate to think you were quote mining but that you read it through. How come you didn't recognise it then?

your nomral method is ipse dixit

You have the hide to say that? Shall we look at all your comments on history?

at no time have i proposed that others do anything, nor is my self-image involved here

So you propose we do nothing to cure AGW. Ok, good! As for your self-image, it isn't very good from previous conversations I have had with you, but how would you feel if AGW was wrong? It could be you know...it just could be. Then we will have spent trillions because you were wrong.

the energy sector is OK with that as long as they get to keep selling fossil fuels.

Those people aren't being paid to do any research

I understand that this is a distinction which it is difficult for your to make in your own mind, but your mental health problems are of no interest to me.

Perhaps this is just an ad hominem, or perhaps it is a reflection of your inability to control yourself. If you were serious in investigating AGW, you should have more self control to enable you to overcome your biases and prejudices.
0 Replies
1
Reply Mon 21 Dec, 2015 03:08 am
@Setanta,
Quote:

Since you're descending once again into personal invective, i'll just say you can kiss my red Irish ass, and i will have nothing more to say to you.

Oh dear! Does the following comment by you count as personal invective because I believe chronologically it came first? Shall I give you a ref?

your mental health problems are of no interest to me.

"Lucky Bob isn't here, he would mark you down for coherence. The format for your post was a bit scrambled but I think I got the idea."

Then, in your very next post, you posted this:

"But you need AGW to feel important and tell others what to do so I'll leave it there."

That first snide remark was in response to a post in which i quoted other members in the order in which they had posted. You're just a foul-mouthed hateful son of bitch to can't go very long without lashing out at someone. **** off and die.
1 Reply
1
Reply Mon 21 Dec, 2015 03:36 am
@Setanta,
Quote:

Have a look at the post dummy! Its format was scrambled and I said that in case I got your meaning twisted and you attacked me for it.

You're just a foul-mouthed hateful son of bitch to can't go very long without lashing out at someone. **** off and die.

I wouldnt put that to a vote as to whether you were worse than me if I were you. Perhaps you have a ref to my foul mouth because I will have no problem finding a ref for your's.
0 Replies
1
Reply Mon 21 Dec, 2015 03:49 am
Just go back a few pages in this thread to where you were addressing me as "**** for brains." Basically, you've been doing crap like that every since i called bullshit on your specious claim of lots of historical evidence for Jesus--and that was years and years ago. You're pathetic.
1 Reply
1
Reply Mon 21 Dec, 2015 04:05 am
@Setanta,
No, it goes back further than that to where I said the Allies stopped the assassination attempts on Hitler because they didn't want to feel forced to negotiate with his replacement but wanted unconditional surrender. As for Jesus, I claimed there was just as much evidence for him as a lot of historically accepted characters.

Just go back a few pages in this thread to where you were addressing me as "**** for brains."

Oh, you mean my reply to this well thought out and referenced post? :

http://flip.it/Rku_y
0 Replies
2
Reply Mon 25 Jan, 2016 07:17 am
Right wing media (and followers of it) are not for the most part even available for a rational conversation on this. Note that I began this thread 11 years ago.

All the rest of us are simply going to have to bypass these dangerous fools and get more changes into policy and law.
2 Replies
2
Reply Wed 27 Jan, 2016 10:52 am
@blatham,
I'm not sure you are correct in that. In any event, your "all the rest of us are going to have3 to bypass" comment suggests you aren't interested in a democrat process for resolving an issue with enormous near term economnic consequences that will affect everyone. What gives you the certainty to adopt such an undemocratic and authoritarian position?

Indeed the intensity of the belief in this matter, particularly on the part of people not educasted or experienced in the science itself, compared to the much more qualified and conditional comments I hear and read from real scientists, suggests to me that this issue may contain a significant element of mass hysteria - another children's crusade.

In another thread you cited a journalist's (exagerated) report of the findings of some German researchers who used satellite data to estimate the average rate of sealevel rises over the past decade. There is no built in gauge for sea level world wide, and this method, whils workable from an analytical/computing perspective, is subject to significant error and uncertainty. The report indicated that the previous rate of sea level rise was from 0,7mm/year to 1.0mm/year - a fairly wide range of uncertainty. The journalist reported the new measure was 1.4mm/year -- leaving out any indication of that uncertainty. (Very likely we have some unscientific journalistic selection/manipulation of data going on here.)

Anyway, just what is the significance of a 1.4mm/uear sea level rise, in the unlikely event the repport is accurate? It works out to a seal level rise of 1 inch in about 18.2 years. Will this change be monotone snd continue at a steeady or increasing rate? That's not likely. The geological history of the earth indicates continuing cyclic changes in this and other measures. Indeed there is ample data and theory that indicates that the accurate calculation or forecast of future states in such complex systems is quite impossible.

Finally the consequences on humanity for the cure proposed by the zealots here are greater than those indicated by the problem they wish to solve. There is food for thought there as well.
1 Reply
1
Reply Wed 27 Jan, 2016 05:38 pm
@georgeob1,
I dont think there will ever be a decent objective discussion about this topic on A2k. NOR on many of my geology discussion sites. It appears that most folks involved in Uni research are producing papaers that begin with some assumptions that I dont consider valid.
Like -AGU has (until very very recently) avoided incorporating D-O cycles and their long periods of expression into all this .

1 Reply
3
Reply Wed 27 Jan, 2016 07:45 pm
@farmerman,
I agree. Thanks... interesting paper, and one that amply reflects the strong nonlinearity and complexity of just this aspect of the problem, with changing conditions arising from conductive, convective and radiation heat transfer with associated phase changes and changes in reflectiviy/absorbtion as well as chemical and density changes in air & seawater. Truly a complex system in the fullest mathematical/dynamic sense.
1 Reply
2
Reply Thu 28 Jan, 2016 11:03 am
@georgeob1,
A lot of that complexity blah blah is just a convenient smoke screen.
0 Replies
2
Reply Sat 30 Jan, 2016 09:59 pm
@blatham,
http://www.theguardian.com/commentisfree/2016/jan/30/republicans-climate-change-denial-policy
0 Replies
1
Reply Mon 12 Sep, 2016 09:37 pm
An infographic debunking the 'climate has changed before' argument for not worrying.

Yeah, it has. But not this quickly.

1 Reply
2
Reply Tue 9 Apr, 2019 06:40 am
@hingehead,
Climate change means nearly all glaciers in the Alps may disappear:
Around 95 per cent of glaciers in the Alps will be wiped out by the end of the century if the world continues pumping out carbon emissions at the current rate.

While previous studies had only assessed 500 glaciers, the new study looked at more than 19,000 glaciers using both satellite data and field visits. The researchers found that, between 1961 and 2016, the world's non-polar glaciers had lost around 9,000 billion tons of ice and contributed 27 millimeters to rising ocean levels.
The new report put the shrinkage rate for glaciers at 18 percent faster than that calculated by another international study in 2013. It found that glaciers are contributing as much ice melt to sea level rise as the Greenland ice sheet and more than the Antarctic ice sheet.
The study found that glaciers in Canada, the U.S., New Zealand and Europe could melt completely by 2100. 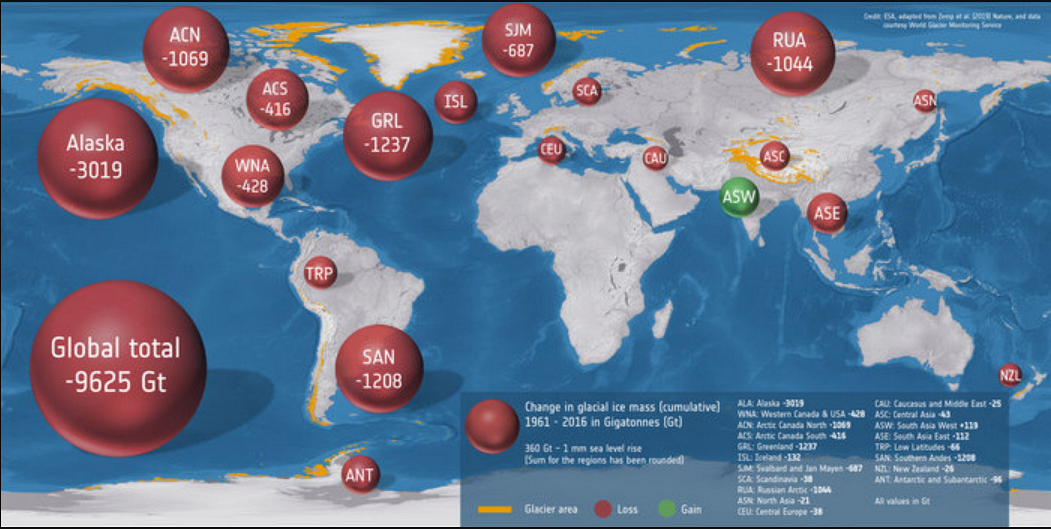 GLACIERS LOSE NINE TRILLION TONNES OF ICE IN HALF A CENTURY]/url]
1 Reply
2
Reply Tue 9 Apr, 2019 06:41 am
@Walter Hinteler,
Modelling the future evolution of glaciers in the European Alps under the EURO-CORDEX RCM ensemble

Glaciers in the European Alps play an important role in the hydrological cycle, act as a source for hydroelectricity and have a large touristic importance. The future evolution of these glaciers is driven by surface mass balance and ice flow processes, of which the latter is to date not included explicitly in regional glacier projections for the Alps. Here, we model the future evolution of glaciers in the European Alps with GloGEMflow, an extended version of the Global Glacier Evolution Model (GloGEM), in which both surface mass balance and ice flow are explicitly accounted for. The mass balance model is calibrated with glacier-specific geodetic mass balances and forced with high-resolution regional climate model (RCM) simulations from the EURO-CORDEX ensemble. The evolution of the total glacier volume in the coming decades is relatively similar under the various representative concentrations pathways (RCP2.6, 4.5 and 8.5), with volume losses of about 47 %–52 % in 2050 with respect to 2017. We find that under RCP2.6, the ice loss in the second part of the 21st century is relatively limited and that about one-third (36.8 % ± 11.1 %, multi-model mean ±1σ) of the present-day (2017) ice volume will still be present in 2100. Under a strong warming (RCP8.5) the future evolution of the glaciers is dictated by a substantial increase in surface melt, and glaciers are projected to largely disappear by 2100 (94.4±4.4 % volume loss vs. 2017). For a given RCP, differences in future changes are mainly determined by the driving global climate model (GCM), rather than by the RCM, and these differences are larger than those arising from various model parameters (e.g. flow parameters and cross-section parameterisation). We find that under a limited warming, the inclusion of ice dynamics reduces the projected mass loss and that this effect increases with the glacier elevation range, implying that the inclusion of ice dynamics is likely to be important for global glacier evolution projections.