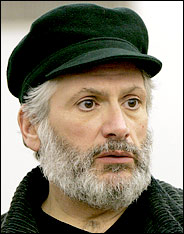 When we last checked in on Harvey Fierstein, he of crocodile voice, sizable girth and effusive punctuation, he was playing Edna Turnblad, the lovably large matriarch at the heart of the campy hit "Hairspray." Mr. Fierstein, who won a Tony in the role, stayed with that show for almost two years, before leaving to take a long break from performing. Which would have worked out just fine had director David Leveaux not called and asked the famously, jubilantly gay actor if he might be interested in replacing Alfred Molina as Tevye, the ultimate Jewish father, in the Broadway revival of "Fiddler on the Roof." After much hand-wringing and a personal audition with the musical's creators - Joseph Stein (book), Jerry Bock (music) and Sheldon Harnick (lyrics) - Mr. Fierstein agreed to take the role, grow the beard and take the biggest risk of his professional life. Along the way, he says, he's discovered how big Tevye's shoes are (see Zero Mostel, Topol, Theodore Bikel) and even found a little religion. How the critics take to his Tevye remains to be seen - he starts performances at the Minskoff Theater on Tuesday night - but recently Mr. Fierstein took a break from rehearsals to talk to Jesse McKinley about making the leap from doing drag to doing deedle-deedle-dum.

JESSE McKINLEY Are you worried about the critics, or the people who think you are just completely wrong for the role?

HARVEY FIERSTEIN Well, somebody did say to me, "Is it going to be a strain for you to play a heterosexual?" And I thought, "Which is more of a stretch: to play a 50- year-old Jewish man with a beard who comes from a Jewish family or to play a Baltimore housewife who is 600 pounds?" WHAT'S MORE OF A STRETCH? Are you kidding me?!

Q. What about adjusting to going from overt musical comedy to this?

A. With this role, you've got standup comedy, in direct address to the audience. Then you've got the monologues to God, which is like playing a scene with an invisible person. And then I've got scenes of out-and-out comedy and slapstick, and you've got real drama, which you then have to relieve the audience with some more comedy. So you better be funny, cause otherwise you're going to have a big bag of doubts. I mean, I could have stayed home to be this miserable.

Q. But you said you're also getting choked up onstage.

A. I used to go home from "Torch Song Trilogy" and just cry for an hour. Now, I can't even make it through the scene at the train station [in which Tevye bids farewell to his second daughter] - with the stage manager - without breaking down. With my feet tied up in my shoes, pinching myself, and still I look up at God and say, "Take care of her," and I'm done. I have to get out of that rehearsal room so fast, because the audience should cry, not you. I can't be too aware of it. My kishkes are on the floor. That's the other thing. This show has made me so Jewish.

Q. Are you generally religious?

Q. Has your praying increased during rehearsal?

A. Only when I forget a line. You know how they say there are no atheists in the foxholes? Well, there's no atheist at the Minskoff either.

Q. You're smiling, though.

A. Of course I am! Look, am I intimidated? Yes. Terrified? Yes. But when they first offered me the role, Jack O'Brien, the director, said to me: "Look, you can spend the rest of your life saying, 'They offered me Tevye in "Fiddler," ' and everybody saying, 'Yeah, right,' or you take the role and maybe take your licks." You just have to take the role. I mean, there's no living with yourself the other way around.

Q. You have said you grew up listening to "Fiddler," that you saw it as a child, that you knew the score by heart, etc.

A. My father sang me "Sunrise, Sunset" as a kid. But it's something you watch from afar. There's a big difference between being the biggest Mets fan in the world and saying, "O.K., here you are, Shea Stadium, hit that ball!" You're like, "O.K., I'm going to hit the ball now," but there's a big difference.

Q. What specifically is scary?

A. Well, you may not have noticed, but I'm not really a dancer. So, I'm learning all these dances, and I learned them all in the rehearsal room, right? So today, for the first time, we're doing them on the set, with the full cast, and we're doing the wedding scene with all the wedding guests and - I've never done it except for me and a couple of stage managers. So, I'm like, "O.K., I'm going to do it," and I'm doing, with one of the guests, and I do the step, I do the step, I do the step, and I turn, and he goes away, and another person comes up. And I'm like, "What are you doing here?" And by then you've missed the step! Who are all these people? If you're a dancer, it's fine, but look at me!

A. Forty pounds! But I mean, you know this show as an audience member and you think, "Oh it's so beautiful; and it's so funny, so well constructed," and then all of a sudden you're doing it, and it's a very painful show.

A. It questions everything in this man's life. He starts out this incredibly happy man - well, incredibly happy? No. He's poor, he's got five daughters and no sons, a wife that - he lives in a house full of women, including the cows he works with. This is not a man who gets to hang out with the guys a lot. But he's got God. His best friend is God. And when you have that kind of faith, nothing is frightening.

A. Well, not very far into the show his choice for his daughter is questioned, and he has to bend and lie and change things in order to make his daughter happy. And it's O.K. And then his second daughter falls in love and is challenging the traditions and everything of his beliefs. She's challenging the way things are done: marriages must be arranged by the papa. This should never have been changed! "One little time I pulled out a thread and where has it led? Where has it led?" and she leaves. He's arrested, sent to Siberia, and the daughter goes off with him. I mean, in Chekhov they carried on when they were going 12 miles to town - this is to go to Siberia! From Kiev to Siberia? He'll never see her again! Nobody has ever come back from Siberia! My daughter's gone! So one is married, not to who I wanted. But I like the boy, but she's very poor. The other one is off to Siberia, and she's not even married!

A. I'm telling you, the heartache this play can produce.

Q. So, how did you prepare?

A. I read the biography of Zero, and I read the book "The Making of a Musical" [by Richard Altman and Mervyn Kaufman], which is all the first production. You know, because I'm not getting to rehearse it from day one, you don't get all that great early stuff, that in-depth work, so I had to do all that myself.

Q. This role is a lot bigger than Edna. How are you going to handle it vocally?

A. This lays in my voice better because everything is down here. "If I were a rich man, hmm, hmm" is more like my speaking voice, whereas Edna was more up here, and its rock 'n' roll, and I'm not a rock 'n' roll singer. Also in "Hairspray" the songs were more songs, as in stand-alone songs, whereas in "Fiddler," they are out of the drama. Songs don't go on any longer than they have to - and they are just sung once; it doesn't come back with a chorus. They are monologues almost. Jerry Bock would almost prefer that you speak it through half of it.

Q. The creators, have they heard you sing it?

article (registration required)
Type: Discussion • Score: 0 • Views: 8,342 • Replies: 60
No top replies
1
Reply Tue 4 Jan, 2005 11:35 am
I'm really excited about Harvey Fierstein playing Tevye - seems like a great idea to me. I wonder if his run is already sold out?
0 Replies
1
Reply Tue 4 Jan, 2005 11:40 am
Wow, does sound great! Love Harvey. Huge heart.
0 Replies
1
Reply Wed 5 Jan, 2005 11:14 am
mac, I'm sure there are still tickets available because the Minskoff (where Fiddler is playing) is enormous -- the seating capacity is somewhere around 1,700. It's one of those abominable modern theaters that were built in the 1970's, designed solely for the purpose of maximizing revenues and with absolutely no charm or intimacy.

The theater in the Marriott Marquis hotel is another one. Several lovely old theaters, including one named for Helen Hayes, had to be torn down to clear the site for the hotel. Many people, including Helen Hayes herself, protested the loss of the theaters by picketing the demolition site. The developers tried to buy her off by offering to name the theater in the hotel for her, but she refused to have her name associated with the kind of theater they were planning to put in the hotel. So another theater (formerly known as the Little Theater) changed its name to the Helen Hayes, which is why there's still a Helen Hayes Theater on Broadway.

Sorry for the curmudgeonly trip into the past: I'm sure Harvey will be wonderful in Fiddler, and if I could be assured of getting a seat anywhere close to the stage at the Minskoff, I'd even consider going to see him myself!
0 Replies
1
Reply Wed 5 Jan, 2005 11:23 am
Not curmudgeonly at all!

Will Replacement Cast Members Be Eligible For Tony Awards?

Harvey Fierstein might just be able to win a Tony Award for his work as Tevye in the current revival of Fiddler on the Roof even though he didn't create the role for this production.The New York Post reports that the Tony Awards Administration Committee will meet Jan. 20 to discuss whether actors who replace other performers in Broadway shows should be eligible to win a Tony for their work. A member of the Tony rules committee told the New York daily, "It's being talked about with a certain amount of good spirit. I just hope it doesn't get bogged down by the question of, 'How on earth do we do it?'"

Tony rules now state that only actors who are in the opening-night cast of a show are eligible to win a Tony Award.

The Post says three possibilities are currently being considered to recognize replacement cast members: creating a Best Cast Replacement category where actors would be selected by the Tony nominating committee; giving a special Tony Award each season to one significant cast replacement; or allowing replacement actors to be eligible in existing Tony categories.

Among the high-profile replacements now on the boards include the aforementioned Fierstein in Fiddler, Brooke Shields in Wonderful Town, comic Bruce Vilanch in Hairspray, Carolee Carmello in Mamma Mia! and Richard Kind in The Producers.
0 Replies
1
Reply Fri 7 Jan, 2005 10:12 am
Wow, that's an interesting development. There've been lots of replacement actors who should have won in the past.
0 Replies
1
Reply Fri 7 Jan, 2005 12:34 pm
Bad news for Harvey: this just in from Playbill.com:

My arm could definitely be twisted.
0 Replies