Has anyone seen Blade Runner 2049?

Forums: Movies, Sci-Fi, Blade Runner
Email this Topic • Print this Page
Reply Mon 16 Oct, 2017 05:57 pm
I saw it this weekend and thought it was one of the best sci-fi movies I've seen in quite a while. Ex-Machina was probably the best before this.

The atmosphere of this sequel was very similar to the original and because that was so esoteric I think it's impressive that they pulled it off.
Type: Discussion • Score: 6 • Views: 1,357 • Replies: 20
No top replies
2
Reply Mon 16 Oct, 2017 09:47 pm
Yes and I liked it, very seldom do I think that these long movies should have been so many minutes but here I did not mind. This movie was beautiful on the screen. I have problems with the story though, how this was another go at getting to the scenes that they wanted to shoot rather than making sense..GOTH does that and so many movies too....but this was fun enough that I did not care.

Absolutely see this in a theater with recliners.
0 Replies
1
Reply Tue 17 Oct, 2017 05:59 am
@rosborne979,
I experienced this Sunday on the largest IMAX screen in North America.

Has anyone seen Blade Runner 2049?

It's best seen in 2D with a 4K projector, if anyone is yet to see it, and on the largest possible screen you can see it on.

The 3D is weak according to this review:
http://www.3dor2d.com/reviews/blade-runner-2049

And it was filmed in 3.4K which means there is an advantage to seeing it projected in 4K instead of 2K:
http://realorfake4k.com/my-product/blade-runner-2049

(Note that in most cases you can only see 4K films in 2D. Most 3D releases only come in 2K resolution. The only exception is Laser IMAX, which is capable of 3D and 4K at the same time, but only a small handful of theaters have Laser IMAX.)
0 Replies
1
Reply Tue 17 Oct, 2017 07:44 am
@tsarstepan,
tsarstepan wrote:

I experienced this Sunday on the largest IMAX screen in North America.

Oooh. What did you think of Laser IMAX? It is supposed to offer unprecedented detail in darker scenes.
1 Reply
1
Reply Tue 17 Oct, 2017 08:14 am
@rosborne979,
I went last night. I left the theater after about 75 minutes. Absolutely the most boring movie I've seen in a long long time. I may have only walked out of 3 movies in my entire life.

Absolutely beautiful movie scenes (although, not that unusual anymore; many movies look great), but I could not stay awake during the film. It wasn't even a late show (started at 6:30pm).

I experienced this Sunday on the largest IMAX screen in North America.

Oooh. What did you think of Laser IMAX? It is supposed to offer unprecedented detail in darker scenes.

Just out of curiosity, what do you consider a "good" Sci-Fi film? Example?


I googled Best Sci-fi Movies and found this list.
https://editorial.rottentomatoes.com/guide/best-sci-fi-movies-of-all-time/

The are all fantastic movies that I've seen multiple times. Some of them, more than 10 times.

It seems clear to me that this movie is a setup for a sequel. I hope that the poor box-office showing does not derail their plans for the next one. And I hope they can keep the same director since I think he did an incredible job.


This type of movie (praying to be so) may have legs cinema wise. It most likely won't break even but hopefully it will come close to breaking even before leaving the movie theater.
BoxOfficeMojo 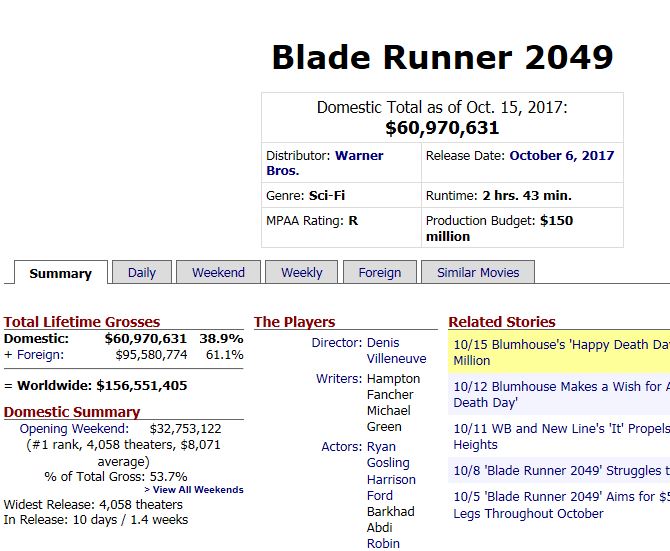 China will get their theatrical release in 10 days.

Japan isn't on the Box Office Mojo foreign box office totals. They have to be getting a theatrical release. Sony is freaking Japanese. That only makes sense.

It's one of the loveliest IMAX films I've witnessed.

Laser IMAX uses a much brighter source of light than is traditionally used in projectors. This means they have a lot more shades of gray between black and white. And that means it can convey a lot more detail in darker scenes that will look more muddled with traditional projectors.

For the same reason Laser IMAX is also capable of displaying a much wider range of brilliant colors.

For movies that expand up to the full IMAX screen height, Laser IMAX projectors can also stretch their pixels vertically so that the picture covers the entire height of the tall screen. (Hint: This theater is where you should see Star Wars.)

For the four Christopher Nolan movies mastered on 15/70mm IMAX film (Dark Knight, Dark Knight Rises, Interstellar, Dunkirk) these stretched pixels are less than ideal. However, except for those four Christopher Nolan movies, "full IMAX" hollywood blockbusters (like Star Wars 7/8/9) are mastered from a 4K digital intermediate that stretches the pixels in exactly the same way. If a movie is produced from a 4K master with vertically stretched pixels, then there is no loss of resolution if it is shown on a 4K projector with vertically stretched pixels.
0 Replies
2
Reply Tue 17 Oct, 2017 01:18 pm
@maporsche,
Why no Matrix?
1 Reply
1
Reply Tue 17 Oct, 2017 01:56 pm
@PUNKEY,
Thats a great movie too.