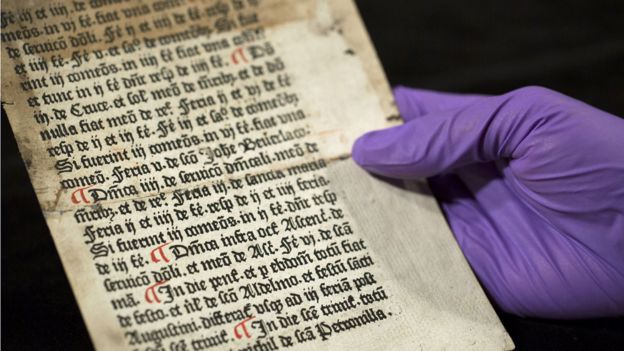 Pages printed more than 500 years ago by William Caxton, who brought printing to England, have been discovered by the University of Reading.

There are no other known surviving examples of these two pages anywhere in the world, from a book believed to have been printed in London in the 1470s.

The pages had been "under their noses" unrecognised in the library's archives.

The two pages, with religious texts in medieval Latin, were produced by Caxton at his pioneering printing works in Westminster - and are now going on public display for the first time since they were sold from his print shop in the 15th Century.

They are believed to be from the earliest years of Caxton's printing press, either 1476 or 1477, and are being hailed as a remarkable discovery.
The only other pages from this book known to be in existence are eight leaves held by the British Museum.

An early printing specialist, Andrew Hunter, of Blackwells Books, said that in the world of rare books, a find like this has a "special, almost magic, resonance".

But the leaf of paper, printed on both sides, has not always been treated with such reverence.

"The leaf had previously been pasted into another book for the undignified purpose of reinforcing its spine," says librarian Ms Delbeque, who first recognised the pages' significance.

"We understand it was rescued by a librarian at the University of Cambridge in 1820, who had no idea that it was an original Caxton leaf."