The five DVD set is intriguing at virtually the same price as it contains full cuts of historical performances.
0 Replies
1
Reply Thu 21 Oct, 2004 10:56 am
Of course, blank DVD-R or DVD-Rams cost me only about $3.00 each and the reproduction would be comparable!
0 Replies
1
Reply Thu 21 Oct, 2004 11:03 am
Even better, there are discounting stores through Amazon that are selling it for about $40.00 new!

Of course, buying from the PBS site supports PBS if you want to give them the extra $20.00.

Willow -- is that cheap enough for you?
0 Replies
1
Reply Fri 22 Oct, 2004 02:42 pm
So, how was it? I was too busy watching the Astros lose, but hope to watch the whole six hours this weekend...
0 Replies
1
Reply Fri 22 Oct, 2004 03:00 pm
It is being repeated in the next several days. Part three (each part contained two episodes) was terrific. The tape excerpt of, I believe, the TONY Awards for 1974 was when Jerry Herman won for "La Cage aux Folles" over Sondheim with "Sunday in the Park with George." Herman's acceptance speech was rather a swipe at Stephen Sondheim although I wonder if he meant it that way (nothings worse than two rival queens competing for the same award?!)

Of course, I think "La Cage" got the award for the flamboyant drag show element and the daring at that time to put an overtly gay couple onto the stage. The narration was a hoot -- straight-laced, macho husbands were dragged into the show by their wives and found themselves jumping and cheering as the gay couple walks off into the future at the end of the show.
0 Replies
1
Reply Fri 22 Oct, 2004 03:30 pm
I only saw a portion of the show, but am planning to catch the first segment tomorrow and the third segment in its entirety on Monday. If those segments are only half as good as the second part, I'll be satisfied.

0 Replies
1
Reply Fri 22 Oct, 2004 03:40 pm
It traverses from"Company" to "A Chorus Line" to "Sweeney Todd" to "Rent" to "Wicked." "Company" is still my favorite musical. I saw it in LA at the Ahmanson. The Aronson set of steel and glass with the rear projections of NYC were incredible and Elaine Strich stopped the show three times.
0 Replies
1
Reply Fri 22 Oct, 2004 04:06 pm
I'm anxious to see the third part, LW.

I've always admired Elaine Stritch. I have an old recording of her singing "Zip" from Pal Joey.

I've not seen Company and am not familiar with the music. I'll have to look into that one. I may have a tape of it from when I had DMX.
I saw a great production of Sweeney Todd - unknowns - to me - but really great performers. So, I bought the CD with Lansbury and Patinkin and love it. I have a tape (taped from DMX) of La Cage and like a lot of the songs.
0 Replies
1
Reply Fri 22 Oct, 2004 04:26 pm
Elaine Strich in her EMMY Award TV version of the Broadway show was shown on HBO in hi-def and I also had to commit that to disk. It's now on DVD. It's actually her life story in song and one of the funniest parts is her encounter with Marlon Brando!

"Sweeney Todd" is also on DVD: 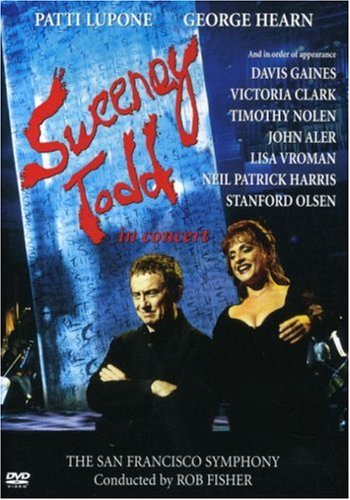 All very confusing as this is how I think it transpired:

Hearn and Landsbury opened the show on Broadway, then Hearn stayed with another leading lady while Landsbury took the role with Len Cariou in the London production, then she and Cariou came back to Broadway.
At least I think that's right!?

0 Replies
1
Reply Fri 22 Oct, 2004 10:15 pm
Nope, that's turned around -- Len Cariou opened the show in 1979 with Landsbury and Hearn was in the London production, returning to take over when Cariou left. Boy, this is complicated.
0 Replies
1
Reply Fri 22 Oct, 2004 10:18 pm
My Sweeney Todd CD is the original cast with Angela Lansbury, Len Cariou and my mistake - not Patinkin - but Victor Garber.
The TV production I saw many years ago, which won a Cable Ace award starred Lansbury and George Herne, who was in the touring company. I don't remember who played the Victor Garber role in that production.

I saw the Patti Lupone, George Herne TV production also, but didn't really care for it as much. I'm also going to look for the playbill for the production I saw on stage. I'm curious now as to who those performers were. They were excellent.
0 Replies
1
Reply Fri 22 Oct, 2004 10:40 pm
Yes, I conceded you were right about Cariou in the first years on Broadway but Hearn did take over the role after returning from the London production. I think Lupone may have had Angela's role in the London production. It's almost ancient history now, isn't it? That's why seeing this series was almost autobiographical as I saw nearly all of the shows either on Broadway or in L.A. at the LA Civic Light Opera productions. I saw "Flower Drum Song" at the old Philharmonic Hall in L.A. before the Dorothy Chandler. One of my close friends from UCLA was an usher and got us into the louge for free!
0 Replies
1
Reply Fri 22 Oct, 2004 10:52 pm
When the PBS Broadway special is concluded, it would be nice if we could turn this thread into a Broadway chat thread. We could compare the shows and perfomers we've seen and talk about our favorite musicals.

I'm off to bed now and want to be sure I program the first Broadway special. It comes on at 2AM here.
0 Replies