What Is The “Alt-Right”? A Guide To The White Nationalists behind tRump

Forums: Politics, Trump
Email this Topic • Print this Page
Reply Tue 30 Aug, 2016 11:09 am
What Is The “Alt-Right”? A Guide To The White Nationalist Movement Now Leading Conservative Media
https://mediamatters.org/blog/2016/08/25/what-alt-right-guide-white-nationalist-movement-now-leading-conservative-media/212643 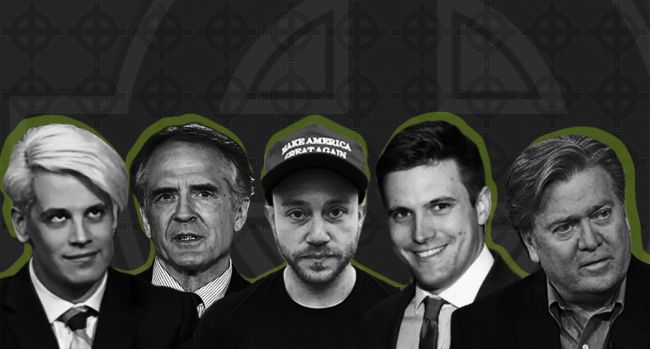 Over the last few months, the so-called “alt-right” has become one of the most prominent factions of the conservative media. The movement’s leading outlet is Breitbart News, whose chairman, Stephen Bannon, has just become the CEO of Donald Trump’s presidential campaign.

In many ways the “alt-right” is a rebranding of classic white nationalism for the 21st century. As BuzzFeed described the movement: “In short, it’s white supremacy perfectly tailored for our times: 4chan-esque racist rhetoric combined with a tinge of Silicon Valley–flavored philosophizing, all riding on the coattails of the Trump boom.”

The “alt-right” opposes diversity and immigration, arguing that those policies are a form of “white genocide.” It embraces racism, sexism, anti-Muslim bigotry, and anti-Semitism and sees its goal as usurping the traditional conservative movement, which it views as feckless and weak, in favor of a brand of nationalism.

With the ascension of Trump, the “alt-right’s” chosen candidate, as the nominee of the Republican Party, its mission is all but accomplished.
(more)
Type: Discussion • Score: 0 • Views: 479 • Replies: 2
No top replies
1
Reply Tue 30 Aug, 2016 11:11 am
Poll: Majority of GOP voters wish they chose another presidential nominee
Source: The Hill

A majority of Republicans wish they had selected a different presidential nominee than Donald Trump, a new poll finds.

A new HuffPost/YouGov poll released Monday found that 54 percent of Republican and GOP-leaning voters believe Trump isn’t the best choice as the party’s nominee, while 35 percent are satisfied with the real estate mogul as the party's standard-bearer.
There’s a jump in dissatisfaction since the same poll in June, which at the time found that 44 percent believe Trump was the best option, while another 44 percent didn’t.

Trump was one of 17 Republican candidates running for president. When asked whom they’d like to win in a primary do-over, 29 percent of those selected Trump, 15 percent picked Sen. Ted Cruz (R-Texas), 14 percent chose Sen. Marco Rubio (R-Fla.), and several other names received less than 10 percent each.

On the other side of the aisle, 56 percent of Democratic and Democratic-leaning voters are content with Hillary Clinton as their party’s nominee, while 32 percent believe there’s a better option. This is up by 3 percent since the same poll in June.

when asked whom they'd like to win in a primary do-over, 29 percent of those selected Trump, 15 percent selected Ted Cruz...

So essentially, even though many are discontented with Mr.Trump as the candidate, the largest portion would still go with him. In other words, he'd still most likely be the nominee.


The mention of Ms.Clinton's support group of 56 percent, while technically substantial, is diminished due to the fact that she is in a smaller group of candidates. The tragic parties that even now, she can only get such a small number when she has basically had 8 years to pull together a strong base (more than 15 if we include her time as a senator, nearly 25 if her time as first lady is included). In the political venue, Mr.Trump has had significantly less time.

I'd be curious to see how Ms.Clinton would fare in a crowd of 17 and also how Mr.Trump would do with less opponents. The numbers have far less value when the playing fields are not even with each other.
0 Replies