Why We Can't Beat ISIS

(CNN) For the third time in a year, one of the US Navy's $360 million littoral combat ships has been knocked out of action by mechanical problems.

The latest victim is the USS Freedom, which had seawater leak into one of its two main diesel propulsion systems on July 11, according to a Navy press release.

The Navy said seawater entered the engine oil lube system through a leak in a seawater pump's mechanical seal.

The leak occurred when the Freedom was participating in the 26-nation Rim of the Pacific exercises, the Navy said.

so much to fear

A burqa (also known as chadri or paranja in Central Asia) is an enveloping outer garment worn by women in some Islamic traditions to cover their bodies when in public. Originating from Arabic: برقع‎‎, burquʻ or burqaʻ, and Urdu: بُرقع‎, it is also transliterated burkha, bourkha, burka, or burqu' and is pronounced Arabic pronunciation: [ˈbʊrqʊʕ, ˈbʊrqɑʕ].

I prefer the spelling preferred by our new ISIS overlords. 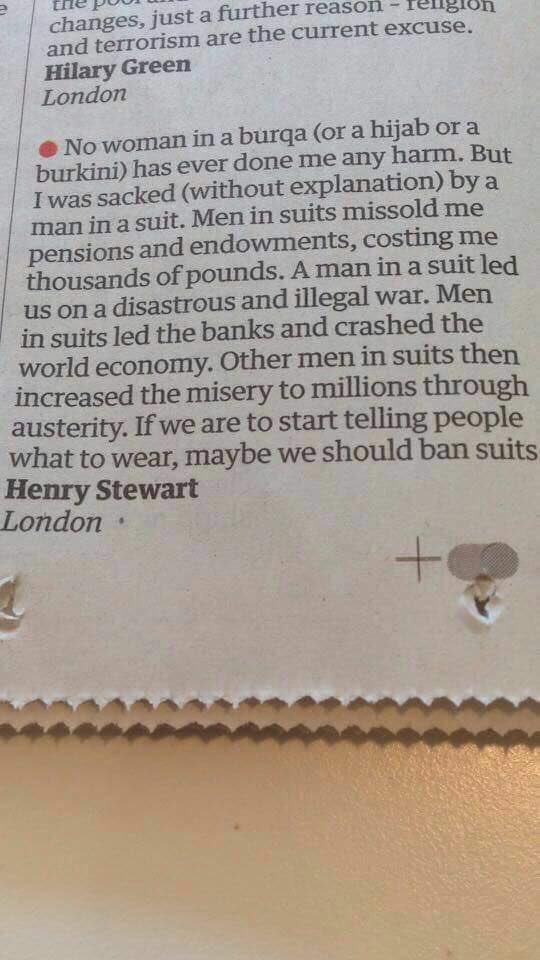 
HERE is an odd thing. The Chinese government gets quite cross about English-speakers using the name Peking for their capital city, insisting on the more modern transliteration Beijing. It should be admitted that the old, Wade-Giles transliteration [see reader's comment and correction below] is pretty confusing to modern readers, with its Ps that sound more like Bs and so on. The modern pinyin system of transliteration is pretty close phonetically to the original Mandarin. When this reporter lived and worked in Beijing a decade ago, he assumed at first that the hostility was linked to historical resentments about British imperialism, the Opium Wars and what have you. But the French were also active as imperalist foreign devils in their day, and nobody seemed to bat an eyelid when they talk about Pékin. The Spanish are allowed to talk about Pekín and so it goes on.

China's most prestigious university, meanwhile, still uses its original English name, Peking University, when dealing with foreigners, though it is Beijing Daxue (literally, Beijing University) in modern Mandarin. Within China, to add to the confusion, it is universally known by the truncated name BeiDa.

All of this seems to have flummoxed David Cameron's press handlers. The British prime minister gave a speech at Peking University this week, and rather good it was too. Alas, when I last checked the Downing Street website was reporting that the boss was speaking to students at "Beida University". Perhaps they just could not bring themselves to use the name Peking.

Addendum by R.L.G.: As pointed out in the comments, the two characters of daxue mean "great/big" and "study/school". So a daxue is a place of great learning. Meanwhile the two characters in Beijing mean "north" and "capital". So the shortening Bei-Da means "great-north". This is the Chinese version of an acronym, and is fairly common, no less unusual than NYU.
0 Replies
2
Reply Wed 31 Aug, 2016 01:34 pm
@bobsal u1553115,
Thanks again Bob. It's not everyday....
0 Replies