End of social security in 2016

Who's this 'you folks', white man.

I think we are doing pretty well-not great, but well-considering the severity of the 2008 crash. They said it would take ten years to get past it when it happened, and it looked like those prognosticators were right. But we've been back on track for a number of years now, and the bad things, (notably debt / gdp ratio) has almost completely stopped rising, and the hiring has been good for several years. Not ideal, but I'll definitely take it.
2 Replies
1
Reply Tue 21 Jun, 2016 04:25 pm
@Blickers,
When one compares the US economy to the rest of the world, we're doing pretty well. Not great, but only people who are unrealistic blame our politicians for our economy.

http://www.weeklystandard.com/the-american-economy-vs.-the-worlds/article/823424
0 Replies
1
Reply Tue 21 Jun, 2016 04:32 pm
Where did you get your information that the liberals took away the F-16s? Here is a chart, generated in realtime, which shows how many F-16s are still active.

Air Force has about a thousand, Navy just a few. There are about, 3,000 F-16s alone active between the US and our allies.


Your reports of no more F-16s seem to be in error.
1 Reply
1
Reply Tue 21 Jun, 2016 04:58 pm
@cicerone imposter,
A friend went to apply for SS benefits this year at 62 years of age. One of the questions they asked was if he owned guns. Why would they ask that? I know that there is a movement to disallow SS to gun owners, but it has not passed into law. Not yet. I hope it doesn't. Looks like they are taking info on everybody about this right now. So, in a way, they could end SS for some people.
0 Replies
1
Reply Tue 21 Jun, 2016 05:05 pm
@oralloy,
When you are at war you do get to watch where they position their planes using all kinds of surveillance including satellites.

Considering we have over 3 times the fighters of the next largest force, where do you think those magical invisible enemy planes are going to come from? And how could we possible forget all our surface to air missiles that can be used against attacking planes?

Quote Leadfoot:
"Who's this 'you folks', white man."

I agree with your assessment of the current economy but I'm thinking we have moved beyond the point where things are confined to those two schools of economics. I haven't heard any economomists describe the macro economic realm we are entering now. They still haven't moved much beyond the days when 90% of the population was required to grow food or make the necessities of life. I don't even know anybody that does that now.
1 Reply
1
Reply Wed 22 Jun, 2016 07:33 pm
@Blickers,
Blickers wrote:

Where did you get your information that the liberals took away the F-16s?

From interviews with a high-ranking general (or maybe the Defense Secretary) saying that we could not afford to keep our F-15s and F-16s (and A-10s), and will have to phase them out given current budget levels.

I couldn't find the exact article (which was much more detailed), but these two shorter articles have the gist of it:

We can either buy modern fighters, or we can keep using F-15s and F-16s, but we can't do both given current budget limits.

Here is a chart, generated in realtime, which shows how many F-16s are still active.

Those realtime numbers will be going down once we start retiring them all.

Under current budget levels, the Air Force cannot afford to train any F-16 pilots to dogfight, and they are forbidden to do so unless the enemy plane is Vietnam-era or older. Even if the fighters are capable, the pilots are not.

When you are at war you do get to watch where they position their planes using all kinds of surveillance including satellites.

Our satellites would be destroyed in the opening hours of a war with a major power.

Should I count you as a Liberal vote in favor of limiting the Air Force to the extent that they can defend US soil or US forces abroad, but not both?

Considering we have over 3 times the fighters of the next largest force,

where do you think those magical invisible enemy planes are going to come from?

From the industrial capacity of the other country.

And how could we possible forget all our surface to air missiles that can be used against attacking planes?

I didn't forget. I've already noted that the Army has tried desperately to modernize their SAMs, only to have Liberals cut the program as "unnecessary" due to our imaginary air superiority.

Too bad, you are blind to your own idiocy as well as the capabilities of our military.

Our satellites would be destroyed in the opening hours of a war with a major power.


I've often thought about how easy it would be to do that. A few loads of sand launched into counter orbit would wipe out satellites for a much longer duration than a major war.
0 Replies
1
Reply Thu 23 Jun, 2016 07:20 am
@oralloy,
Ah.. that same major power that has only 1/3 of our airforce and would be required to defend their own territory from our ship based planes. You aren't very good at war games, are you?
1 Reply
1
Reply Thu 23 Jun, 2016 07:23 am
@oralloy,
Quote:

From the industrial capacity of the other country.

It's too bad that the US has never been capable of producing anything with our lack of any industrial capacity. It's also too bad that we spend 5 times what any other country spends on their military but they have so many more planes than we do.

I haven't heard any economomists describe the macro economic realm we are entering now.

That's because economics is not science; it's art - or educated guesses. The economy of the world is always in flux, and there's no way to measure something that's always moving. Past information is not necessarily useful to predict the future in economics.

That's because economics is not science; it's art - or educated guesses.

Thats true of economics as it is usually talked about but that is not macro economics.

The effects of things like tractors in farming, automation, IT, CAD, CAM, globalization of labor markets, etc. are not art. There are obvious effects these things will have and they are not guesses.

You may think I'm stating the obvious but the predictable trends they bring are being largely ignored by the so called economist talking heads in the media. They revert to the effects various legislation will have on the economy, jobs, etc. and that truly is pure guesswork (and not much art either).
1 Reply
1
Reply Thu 23 Jun, 2016 10:54 am
@Leadfoot,
I disagree; macro economics is always in flux. How do you measure that? Did you predict what would happen to Brexit and the effect on currency values? That impacts the whole world's economy. Have you watched the change in value between the UK pound and US dollar?

http://www.telegraph.co.uk/money/special-reports/how-brexit-will-affect-your-money/
2 Replies
1
Reply Thu 23 Jun, 2016 11:10 am
@cicerone imposter,
Of course macro economics is in flux, isn't everything? But that flux is like still water compared to the flash floods of societal changes and politics. But those things are not macro economics although they try to say they are.

I'm not saying those things are not important or don't affect people's lives but if you ignore the larger factors and try to address the economy with politics, quick fixes, etc, it's all a crap shoot as you said.

Have you watched the change in value between the UK pound and US dollar?

Nope. Doesn't affect me for several reasons. And it's not a macro economic trend. Next month or next year it will be a forgotten blip in the exchange rates.
0 Replies
1
Reply Thu 23 Jun, 2016 11:26 am
@oralloy,
Quote Blickers:

Here is a chart, generated in realtime, which shows how many F-16s are still active.

Those realtime numbers will be going down once we start retiring them all.

Your 2012 had to deal with the sequester, which is over. The Air Force has moved on. The F-22s are being supplemented with retrofit, improved F-15s, until the F-35 becomes available.

Boeing Unveils a Version of the F-15 With Twice as Many Missles
Double the trouble.
By Kyle Mizokami
Sep 18, 2015 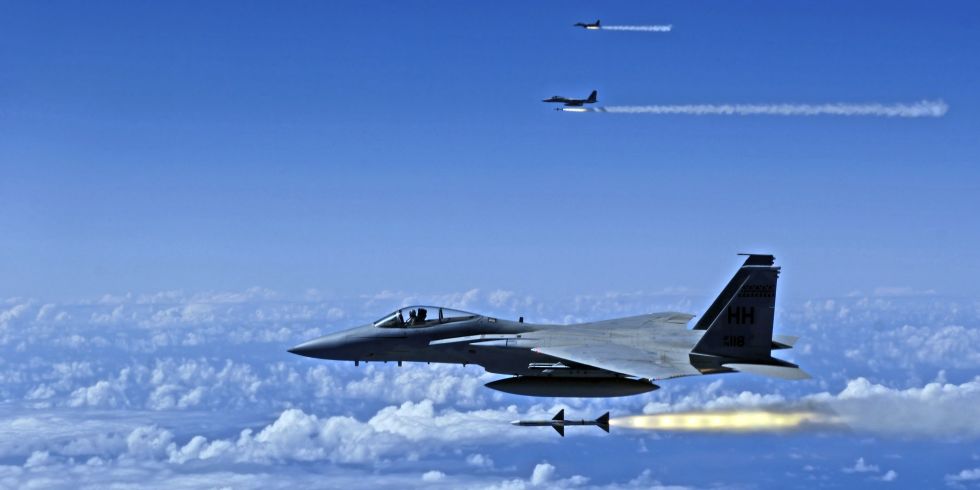 The F-15 Eagle is America's most storied jet fighter. It has an
unbeaten record in the air—104 kills and zero losses—unmatched
by any other combat aircraft.

It's also getting long in the tooth—the
average age of the 254F-15s serving in the U.S. Air Force service is now 28 years old. That puts it a generation behind the latest planes, from the American F-22 Raptor to the Chinese J-20. The Air Force had planned to replace the F-15 with the F-22 altogether, but stopped production of the F-22 Raptor at just 195 aircraft, as the multi-purpose F-35 Joint Strike Fighter became more politically popular.

Now the plan is for the Raptor and the Eagle to work together in
the skies, teaming up to take down enemy fighters. And to make the Eagle more
lethal for its share of the task aviation giant Boeing is has introduced an
upgrade: the F-15 Eagle C2040.

A conceptual rendering from Boeing of the F-15 C2040
Boeing

The Eagle C2040 is designed to be a missileer, carrying up to sixteen
AIM-120D AMRAAM radar-guided missiles into battle. That's twice as many as many as existing F-15Es can carry and six more than the current reigning champion in missiles, the Sukhoi Su-35 Super Flanker.

The upgrade also includes the Talon HATE advanced communications datalink, which allows the F-15 to exchange data with the F-22. Boeing almost
certainly has in mind a scenario in which stealthy Raptors could fly ahead
undetected, quietly identifying and targeting enemy aircraft for the heavily
armed Eagles.

Other upgrades include an improved radar, an infrared targeting
system, and improved electronic warfare capabilities. The F-15 would also have conformal fuel tanks attached to the fuselage, giving the plane even longer legs while preserving the Eagle's maneuverability.

The Eagle 2040C is an upgrade package that would be applied to existing
F-15s. The package should keep the F-15 lethal until the U.S. unveils its next
generation air superiority fighter—right around 2040.
http://www.popularmechanics.com/military/weapons/a17395/boeing-unveils-a-missile-slinging-version-of-the-f-15-eagle/

They are going with improving the F-15, plus the great advantage the US has in ground to plane communications. Unclear is whether those F-16s are indeed going to be retired, since your reference for that is from 2012 and it basically was an Air Force guy grumbling about what he figures they'll have to do if the Air Force doesn't get what it wants-which is the usual posturing that occurs on these expensive weapons systems. Nor is it clear whether or not that sequester-driven cutback on F-16 training is still in effect.

The above article is from less than a year ago. It paints a different picture altogether.