Forums: Weather, Hurricanes, 2016, Tropical Storms
Email this Topic • Print this Page
Reply Wed 1 Jun, 2016 08:27 pm
It looks to be a busy year for tropical weather. Today is the first day of Hurricane season and already a low may be building in the Gulf.

On the first day of the Atlantic hurricane season, the National Hurricane Center noted the potential of a broad low pressure system forming over the southern Gulf of Mexico by early next week.

The hurricane season, which started June 1, runs through Nov. 30.

Two tropical systems have already formed this year, Hurricane Alex in January and Tropical Storm Bonnie in May. The next named storm that forms this season will be named Colin.
http://theadvocate.com/news/15971891-123/hurricane-center-keeping-eye-on-potential-low-pressure-system-in-gulf
Type: Discussion • Score: 1 • Views: 3,887 • Replies: 31
No top replies
1
Reply Thu 2 Jun, 2016 08:40 am
Saw on Facebook that shewolf had to evacuate from flooding. Last I noted, she was picking up her daughter from school. The same rain is moving from there, through here. My home cannot flood, but neighborhoods and roads nearby can.
0 Replies
1
Reply Sun 5 Jun, 2016 02:11 pm
Gulf of Mexico: Tropical Depression Has Formed in Area, National Hurricane Center Says
The organization said at around 10 a.m. EDT that winds had reached 35 mph. If the weather system strengthens, the tropical depression could make landfall over Florida as "Colin." http://www.nhc.noaa.gov/
0 Replies
2
Reply Tue 7 Jun, 2016 11:02 am
.COLIN BECOMES A POST-TROPICAL CYCLONE... ...GUSTY WINDS AND RAINS OVER THE OUTER BANKS SHOULD BE ENDING SOON...
0 Replies
1
Reply Wed 15 Jun, 2016 11:25 am
HOUSTON (KTRK) -- The tropics remain quiet today but we'll be closely monitoring a tropical wave currently in the Caribbean as it tracks toward the Gulf this weekend.

The National Hurricane gives it a low formation chance at 20% as the wave moves into the Bay of Campeche Sunday or Monday.

Meteorologist Travis Herzog says even if a depression or storm develops, early indications are that the heat ridge keeping Houston hot and steamy would likely steer the system quickly into Mexico.

"Danielle" is the next name on the 2016 Atlantic hurricane season list.

0 Replies
2
Reply Tue 2 Aug, 2016 12:51 pm
HOUSTON -- Tropical Storm Earl has formed in the Caribbean. Earl is not expected to be a threat to southeast Texas.

The computers models are in good agreement on the general track of Earl, sending the storm westward towards the Yucatan Peninsula by midweek.

Earl has already caused at least six deaths in the Dominican Republic.
0 Replies
1
Reply Sat 13 Aug, 2016 09:22 am
The ongoing flooding of Louisiana looks very much like the flooding east Texas endured not so long ago.
https://weather.com/news/weather/news/gulf-coast-flooding-latest-news
Beginning this evening, that system is expected to center over Texas. We can only hope it weakens somewhat before getting established.
0 Replies
1
Reply Sat 13 Aug, 2016 05:35 pm
Our drought has been broken. I just hope the rain that flooded Louisiana is not going to treat us the same way. It is picking up out there. Not encouraging at all.
0 Replies
1
Reply Tue 23 Aug, 2016 10:28 am

0 Replies
1
Reply Fri 26 Aug, 2016 03:06 pm
The risk of flooding downpours and gusty thunderstorms will spread toward southern Florida as a tropical disturbance spreads northwestward from Cuba.
While the risk of a tropical storm or hurricane striking southeastern Florida and the Bahamas has diminished for this weekend, a tropical disturbance, dubbed 99L, still bears watching for development.
The poorly organized disturbance was roughly located 400 miles southeast of Miami and Marathon, Florida, and just southwest of Clarence Town, Bahamas, during Friday afternoon.
"If the ill-defined disturbance moves due west, it will move over Cuba and fall apart, but if it tracks northwestward along the coast of Cuba, it will probably survive this weekend," according to AccuWeather Hurricane Expert Dan Kottlowski. 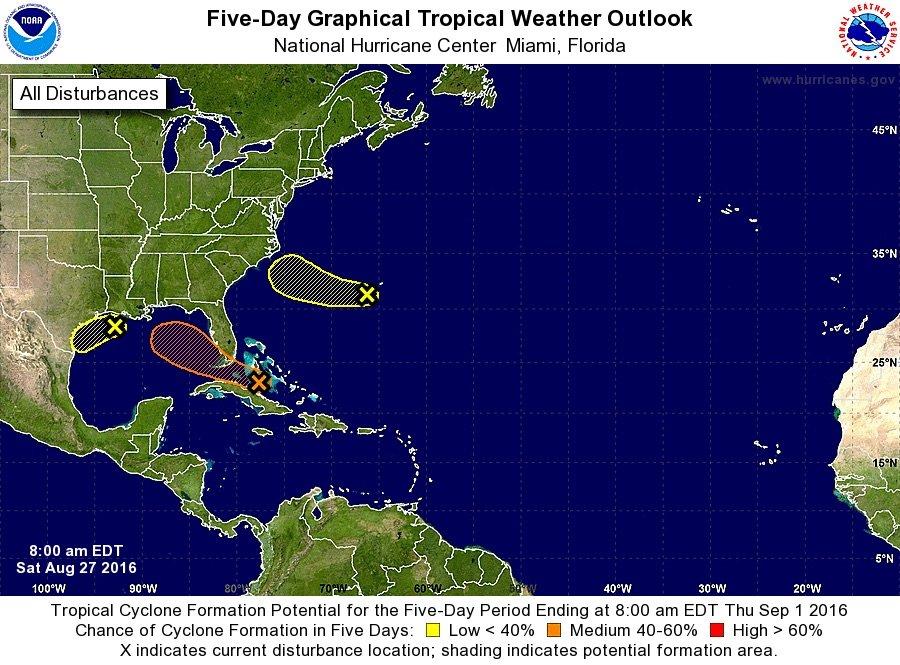 The National Hurricane Center on Saturday morning again lowered the chances of a tropical storm forming near the Florida coast over the next few days.

Meanwhile Tropical Storm Gaston and two other disturbances were also being watched in the Atlantic and Gulf of Mexico.

The tropical wave that has gotten the most attention this week is Invest 99L. Earlier this week it had been given a high chance of developing into a tropical depression or even Tropical Storm Hermine, but instead it has struggled to organize.

That was still the case on Saturday morning, and it had only a 40 percent chance of development over the next five days.

As of 7 a.m. CDT, Invest 99L was located south of Andros Island in the Bahamas, the hurricane center said, and was moving slowly to the west-northwest at 10 mph.

The system still appeared disorganized, as it has all week, and its heaviest storms were located to the south and east of its center, the hurricane center said.

99L wasn't in a very good location to get its act together, but the environment could be a bit more favorable early next week when it gets to the Gulf.

99L's path has been watched closely, and as of Saturday morning it was expected to move across the Florida Keys and into the southeastern Gulf of Mexico.

From there the hurricane center's forecast outlook takes the system to the northwest toward the northern Gulf Coast.

While its path and intensity are highly uncertain, Invest 99L will bring a lot of rain to parts of the Caribbean and eventually southern Florida over the next few days.

The hurricane center said gusty winds and heavy rain will be possible over parts of east and southern Cuba and the Bahamas today and will spread to south Florida later this weekend.
0 Replies
1
Reply Sun 28 Aug, 2016 09:59 am
Update: Hurricane center raises chances a bit of storm developing near Florida 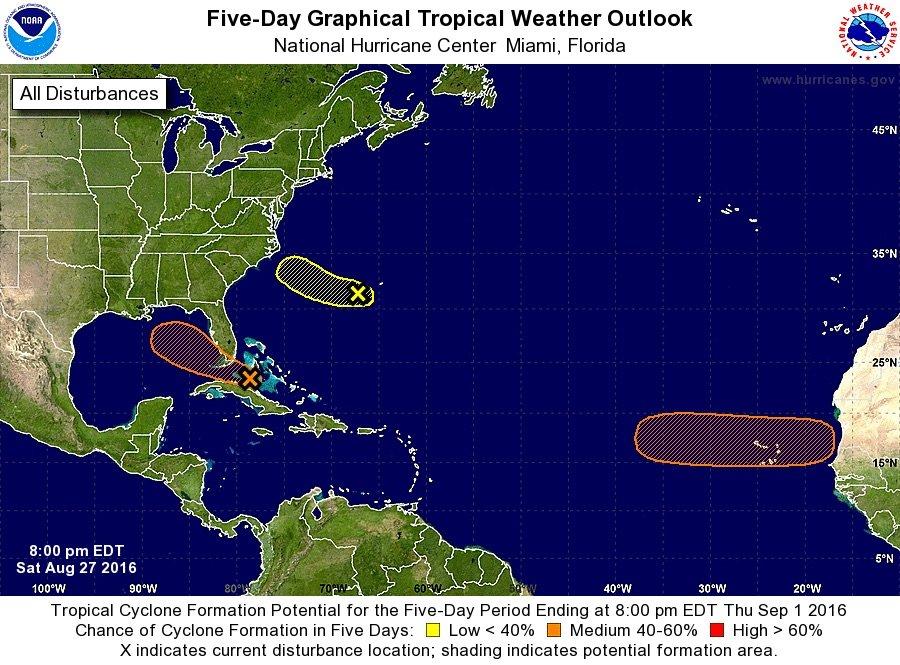 North Carolina's Outer Banks will likely be drenched as a tropical weather system blows by with up to 5 inches of heavy rain, forecasters said.

Meanwhile, a hurricane watch was issued for parts of Florida's Gulf Coast because of another tropical depression in the Gulf of Mexico.
0 Replies
2
Reply Wed 31 Aug, 2016 05:12 am
http://inbigisland.com/news/emergency-shelters-open-today-5-pm
Regarding emergency shelters in Hawaii
0 Replies
2
Reply Wed 31 Aug, 2016 06:56 pm
A hurricane pic from Hawaii