Not the most scientific poll of Turkish sentiment.


No, it's not, but it does show that there were an appreciable number of people in the crowd who booed a moment of silence for the Paris victims.
0 Replies
1
Reply Fri 20 Nov, 2015 07:33 am
@Brandon9000,
They got Fox News to talk about soccer. Weird side effect. 0 Replies
1
Reply Fri 20 Nov, 2015 07:43 am
The same happened already in October, during the football match between Turkey and Iceland. There, it was a moment of silence for the victims of the attack in Ankara which had been disrupted by those hooligans.
1 Reply
1
Reply Fri 20 Nov, 2015 08:07 am
@Walter Hinteler,
That's not the same Walter. Turkey isn't a White Christian country.

0 Replies
2
Reply Fri 20 Nov, 2015 08:30 am
When I was a kid I went to a hockey game between my hometown team and a team from Canada. The hometown fans booed during the Canadian anthem. The irony was, more than half the players on the hometown team were from Canada.
1 Reply
3
Reply Fri 20 Nov, 2015 08:40 am
@Kolyo,
Actually, this happens unfortunately during those 'silent minutes' in various countries.
But you can bet that something happens during all football matches between Greece and Turkey, no matter if in Greece or in Turkey.
1 Reply
1
Reply Fri 20 Nov, 2015 02:42 pm
@Walter Hinteler,
Tonight, after the Marseillaise and at the end of the minute of silence, in Nice (football match between OSC and Lyon, Nice leading momentarily 2:0), supporters chanted "Daech, Daech, on t'enconne!" That matches better.
1 Reply
1
Reply Sat 21 Nov, 2015 05:09 am
@Walter Hinteler,
Turkey is not the best example footballing behaviour. Brandon, like most far right Americans doesn't understand Turkey. They're not fighting IS, they're fighting the Kurds, and they've got a particular axe to grind re France and EU membership.

The emotionally drained France football manager, Didier Deschamps, paid tribute to a moment of “communal grief” at Wembley that was a small act of catharsis in the wake of the Paris terrorist attacks.

Before the England-France friendly international, never had an opposition national anthem been sung (or hummed) more loudly or more lustily at the home of English football.

But as La Marseillaise rang around Wembley on Tuesday night in defiance of the terrorists who caused carnage in Paris, the fans who sang it did so in the knowledge that a friendly between Germany and Holland in Hanover had been cancelled just before kick-off due to security concerns.
Deschamps said he had kept the news from his players, who were on the pitch against Germany at the Stade de France on Friday when three suicide bombers blew themselves up outside, adding to a final death toll of 129.

“The moment when we all sang together was a powerful, emotional moment. We’ve had this moment of communal grief almost, this outpouring of communal grief. It’s been good for us,” he said after a match that finished 2-0 to England but in which the score was all but incidental.

As they filed in an hour before kick-off, with the Wembley arch lit in red, white and blue and the words “Liberté, Egalité, Fraternité” beamed on to the outside of the stadium, the mood among fans was bullish rather than nervous.
“It’s very important for us that the English will sing the national anthem tonight. The people are crying for the events that happened on Friday, but tonight it’s a match for humanity. We are not afraid,” said Olivier Gombert from Lille, one of a group of French fans holding a union flag with the words “together against terrorism” on it.

Before kick-off, fans applauded giant flags representing both countries on to the pitch. In the tunnel, players from both sides, wearing black armbands, looked drawn.

After floral tributes were laid, the anthems sung and the intermingled players from both teams had stood side by side while applause rolled down from the stands, they stood around the centre circle for an impeccably observed minute’s silence. 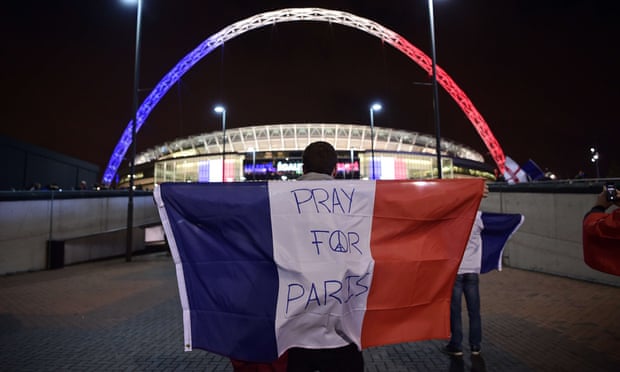 The French national anthem - La Marseillaise - will be played before this weekend's Premier League matches.

A choral version will be played after the coin toss, with players from both teams coming together with match officials in the centre circle.

Premier League chief executive Richard Scudamore described it as an act of "solidarity and remembrance" after the Paris attacks in which 129 people died.

La Marseillaise was sung before England's win over France on Tuesday.

There are 72 French players currently in the Premier League.

"Given how close we are, as well as the long-standing relationship that exists between the Premier League and France, playing La Marseillaise as an act of solidarity and remembrance is the right thing to do," said Scudamore.

Let's be realistic, it doesn't really matter how the crowd behaves at American "football" matches, because nobody outside America gives a ****.
2 Replies
1
Reply Sat 21 Nov, 2015 08:40 am
@izzythepush,
izzythepush wrote:

Interesting comment, since I merely reported a fact and made no interpretation.


You did so. But why did you leave out the previous? Or did I miss the threads about those?
1 Reply
2
Reply Sat 21 Nov, 2015 08:49 am
@Walter Hinteler,
But I admit that you have missed the previous Turkish spectators' behaviour since the game is called everywhere else football.

The responses, by and large, have more to do with the perceived nature of the poster than the topic at hand.

With a pejorative thread title.


How is stating a fact pejorative?

The article contains the words:

It's hard to hear what's happening in the video, but according to reports from Reuters and CBS, some fans of Turkey's team booed, hissed and chanted phrases such as "Allahu akbar" ...