Yes, I consider them the same and yes I consider them misogyny. Making credible threats of physical and sexual violence is a frequent tactic against women who express opinions on contentious issues.

Hmmm... I disagree with you. I don't believe that what Kim Davis (the county clerk who refused to authorize same-sex marriage licenses) is facing is misogyny. It is harassment, and it is deplorable. But, it seems very likely (from data) that if she were a man she would be facing the same or worse.

Credible threats of physical and even sexual violence is a frequent tactic against men and women who express opinions on contentious issues. I already posted the link to the Pew study that shows that men are more likely than women to be the target of threats of violence on the internet (and are more likely to be victims of actual violence).

0 Replies
1
Reply Wed 11 Nov, 2015 07:32 pm
As much as I want to see strong female characters in video games it's hard to come up with real or fictional prototypes. Trying to come up with one I thought of Dagny Taggert in Ayn Rand's 'Atlas Shrugged' but even she had to be rescued by Galt. Rand kind of hated her own sex too. This really does suck.

Am I an unaware chauvinist pig and missing obvious examples?
0 Replies
0
Reply Wed 11 Nov, 2015 08:34 pm
Hollywood has had some success these last two years selling tickets to young men for action movies with strong female characters. Speculation is that Disney is doing another "up with females" movie with Star Wars, and if so it will be a good test of the market. My guess is that it will be weak, young men have been told all their lives that women have priority, they really dont want to be bombarded by the propaganda in their fun times, purchased with their own money I think. If the women are hot, bad ass, and clearly like men with strong male characters it could work, if it is anti male in the style of Frozen it will not. Tbe action movie business being much like the video game market of course. If men will buy into strong female characters in one they will in the other, though I would hope that not all the women are masculine.
0 Replies
2
Reply Mon 16 May, 2016 04:09 pm
@maxdancona,
prove that statement with actual data please.
And give more than one case where being a man is a disadvantage
1 Reply
-1
Reply Tue 17 May, 2016 08:22 pm
@momoends,
Quote:

prove that statement with actual data please.
And give more than one case where being a man is a disadvantage

No problem Momoends. Facts are facts in spite of your political prejudice or mine.

The fact that men are given higher prison sentences then women for the same crime is well-documented. Here is the actual data you requested....

There are plenty of other cases where men are at a disadvantage. These include

- When a father and a mother both want custody of their children. the mother usually gets custody.
- The military selective service where men are forced to sign up and women are not (hopefully this will be changed soon).

This is not saying that there aren't cases where women are at a disadvantage.. including pay gaps and positions of power. My point is that if the goal is equality, you will address all of the issues of gender inequality. It isn't equality if you ignore all of the cases that don't conform to your narrative.

Don't let your political ideology twist your understanding of the facts.

1 Reply
3
Reply Sat 28 May, 2016 10:48 pm
@maxdancona,
first feminism is not a political ideology
second: those situation of disadvance because of being a man are consecuences of men´s machism
women are not force to do military service because machism considers woman to be weak and delicate, indefense creatures to be protected by strong men
men are not given custody because women are considered to be the ones in charge of children, renouncing responsability and demanding jobs to be available to their childrens needs. Thats why we are valuated as a less suitable candidate to get a job when you are married and have children...
machism backfired ah?
if we got to consider men and women equals,custody would be given equally to both parents, women would be accepted and appreciated as members of the armed force of the country and go trouhg military service alongside men
anyway, latin people are exploited and underpaid in the united states of america, homosexuals are persecuted and assaulted in many countries, people with acondroplasia are being discriminated on daily basis....
i don´t ignore what doesn´t suit me.... in fact, i´ve been trying to help a friend get full custody of his children, cause his wife is an irresponsible mother and hes the one who stood there to raise them and sacrifised to give them everthing and she´s the one getting full custody.... im a feminist: the parent who is the most cualified and responsible should be the one getting custody, whether it´s the man or the woman
2 Replies
1
Reply Mon 30 May, 2016 07:30 am
@momoends,
I am curious about what you think "feminism" is. I see it as a political ideology, and ideas about feminism certainly have a lot of power in the politics of the US.

A lot of people believe in equality yet reject feminism. We understand that the ideology of feminism goes far beyond equality. Some 83% of Americans agree that men and women should be politically, socially and economically equal. Yet under 20% of us call ourselves feminists, and under 20% of women in the US call themselves feminist.

We can argue about the meaning of the word. But, in the US at least, it has become associated with a political narrative and a set of political positions that many people who believe in equality don't like.

0 Replies
1
Reply Mon 30 May, 2016 07:35 am
@momoends,
Machism is an interesting word. It sounds like you are saying that men are responsible for all of the bad things in society. Is this what you are saying?

If Machism a bad thing and Feminism is a good thing, I don't think I like this very much.

If we believe in equality, wouldn't machism and feminism be equally good?

What am I not understanding about your view of Machism?

2 Replies
1
Reply Thu 16 Jun, 2016 07:32 pm
@maxdancona,
read my post, please if i were saying men are responsible for all of the bad things in society... all say exactly that, word by word and in capital letters if needed... NO I´M NOT SAYING THAT
go to the dictionary and find both terms and you´ll see no they are not the same, im an ENTP woman, trust me: i just mean what my words mean
0 Replies
1
Reply Thu 16 Jun, 2016 07:33 pm
@maxdancona,
machism is as interesting of a word as nazism or racism

2. You should read about Godwin's law. 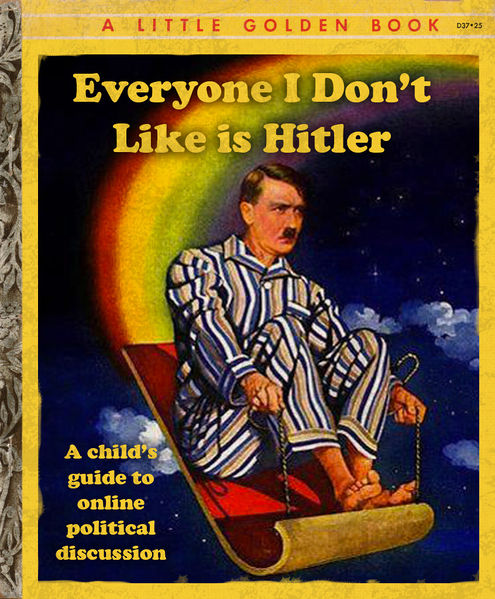 2 Replies
1
Reply Thu 16 Jun, 2016 09:26 pm
@maxdancona,
i think it means what a dictionary says it means but... let´s hear the new meaning you gave that word! after all, why checking what a word means in a book intended to list all the words of a certain language with its correspondent meaning to be used as a tool we can all use and get to know the legitimate meaning?
0 Replies
1
Reply Thu 16 Jun, 2016 09:28 pm
@maxdancona,
why should i read that book.... i said machismo is as interesting as racism and nazism and you understood that i label a nazist to anyone i don´t like...... WOW!! That´s somehow twisted
0 Replies